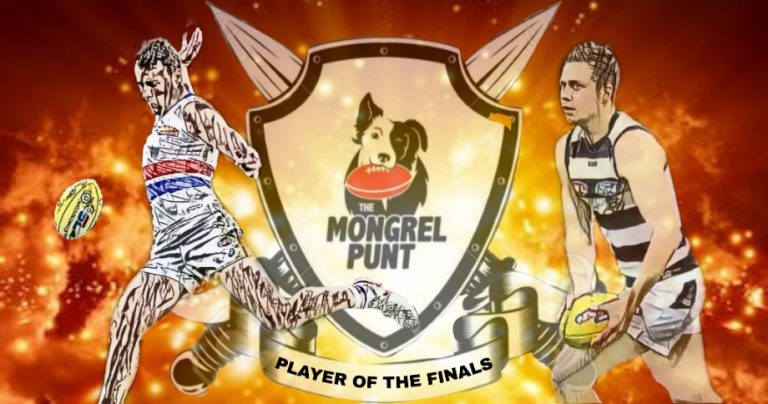 Two one-point results, the number 1 & 2 seeds safely through to the preliminary finals, injuries, electric goals and a liberal dose of controversy have marked the first fortnight of the 2021 AFL Finals.

Considering that September is such a sacred month on the football calendar it’s mildly curious that it took so long to introduce an award to acknowledge the best player across the finals, and even curiouser that this honour which could arguably be the most coveted of any by players is not given due recognition in the awards landscape to date. Entering the sixth season of the Gary Ayres Medal, named for one of the most fearsome and skilled September exponents to have walked the planet we have Richmond’s Dustin Martin with an extraordinary three medals already, with the other two shared by Sydney’s Josh Kennedy and Magpie Steele Sidebottom. The Tiger winning in each of his clubs three premiership seasons, while the other two taken home by the runners up in 2016 and 2018.

To date, each winner has ultimately played in the Grand Final, however, this season could be the first occasion that a side not qualifying for the decider provides the premier player of the finals. The Bulldogs relentless midfielder Jack Macrae, no stranger to quality September performances as one of the best afield in the 2016 Grand Final, has absolutely starred in his two matches so far to take a strong six-vote lead from Cat Tom Hawkins, Swan Isaac Heeney and Demon Clayton Oliver, with Power’s Travis Boak a further vote behind in the official AFLCA votes.

Here at the Mongrel, we do things a little differently. Now, we are not suggesting other methods are wrong per se, just that we can do them a little better, and thus the “Mongrel Player of the Finals” was born last year. Each player in every final is assigned a rating out of ten, and these totals are combined to crown a worthy winner at the end of the finals series.

The leader board is mildly skewed at present due to four clubs playing two games at this stage, while the other four, including two still in the running, have only turned out once. Nonetheless cream rises to the top and there are several worthy Demons & Power players still in contention if they can maintain the rage through two more games.

Not surprisingly Macrae also tops the Mongrel table with 19 votes from two games, just shy of the maximum after a stunning run of form that has reversed his club’s poor form to have them on the cusp of a Grand Final berth.

Sitting just behind him at present is teammate Tom Liberatore on 18 votes, and he would be a worthy winner adding to the family legend that already possesses a Morrish, Gardiner, Brownlow and Premiership Medal. A third dog shares the current placings with Alex Keath’s efforts in holding Bomber Wright and Lion Daniher to just one goal combined in his two games played.

On fire Bulldog defender Taylor Duryea no stranger to big finals performances as his best afield display for Hawthorn in the 2015 Preliminary Final can attest has 16 votes, while silky skilled Cat Mitch Duncan returning from a serious knee injury, also remains within touching distance on 15 votes, polling strongly in both of the games so far. A raft of Brisbane and Giants players fill out the rest of the top 15, but will unfortunately not add to their tallies this season as their teams were knocked out in the Semi-Final round. With the two winning qualifying finalists heavily favoured to win through to that one day in September (for the first time ever this season to be held in Perth), there are a suite of in-form players from Port and Melbourne who could conceivably have two more games to build their score and claim this most sought after title.

Mongrel Player of the Final Leader Board – Week Two