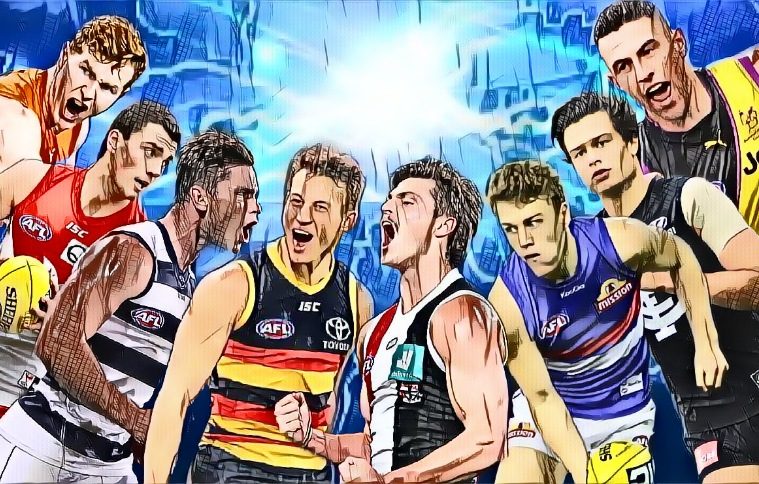 So, the Saints have taken a bit of flak over the years for their recruiting seemingly revolving around whether a player’s first name was Jack or not, resulting in an inordinate amount of players on their list bearing the name.

But is it the best name in the league, and should you rush out and name your kid “Jack” because you think it’ll give him a better chance at making the AFL?

Not if the Toms have anything to say about it!

You see, despite the popularity of the name “Jack” at St Kilda, the name “Tom” is just about as popular in the overall AFL ranks, so much so that both of those names can fill an entire team. There’s a challenge for a list manager – go out and compile an entire team using just one first name to recruit them. It could be done if they really tried!

But that’s now what I am here for today – no, no… I am here to establish which set of first names is the truly dominant name in the game right now. Oh, there are other contenders – the Sams seem to be making a bit of a play and could also field a team, but they currently lack the star power to take on the big two. I’ll list their team at the bottom of the article… where they belong. Dirty Sams…

But this is about the Jacks and Toms, and the Jacks and Toms alone as they fight for given-name supremacy in a league where parents evidently lacked imagination. Just who will be the name to take home the least-coveted prize in footy? Who would win between a team of Jacks and a team of Toms.

I’ll just be listing surnames, as my guess is a further explanation of which “Higgins” it is would be an insult to your intelligence.

My initial thoughts are that this team lacks in two departments – key defenders and rucks. They’ll do fine at stoppages, with Steele, Macrae and Viney proven commodities at winning the tough footy, but I am asking a hell of a lot of Silvagni to ruck all day the way he did in one of the games late this season.

You could probably swap out Henry and Bowes as KP defenders, with Henry really the only one that could handle a genuine full forward, and you’d really need to see Ziebell dropping into the hole as he has done all season to break up marking attempts.

This team gets a traditional set up inside 50, with Riewoldt and Darling making for a great one-two punch, whilst Gunston slots in as the third marking option, leaving Higgins, Martin and Petruccelle to get dangerous at ground level.

This team is not lacking for pace, but I opted to leave Jack Hombsch out in favour of players who could possibly add a little more on the rebound than him. Madgen could slot in as a key back in a pinch, but this team is lacking in talls, overall.

Some of the other Jacks that were left out included Buckley, Bytel, Ginnivan, Hombsch, Lonie, Mahony, Payne, and Ross . Did I miss anyone?

In stark contrast to Team Jack, Team Tom is STACKED with big defenders – so much so that I kind of feel they might be a bit too slow. But I’ll tell you what – with Doedee, Stewart, Jonas and Barrass in the team, they are going to take a heap of intercept grabs. To balance the side out, I have Tom Atkins on the bench to slot into a defensive role should they be a little top-heavy.

The Toms have a huge advantage at stoppages, with “Ruck Jesus” Tom Hickey getting an almost clean look at every hit out against the depleted Jacks, and De Koning ready to give him respite when he needs it. At their feet are Mitchell and Libba, as well as the bloke who was just a little bit robbed in this year’s Rising Star Award, Mr Green.

Up forward, the Toms have a great mix again, with the Adelaide version of Lynch and TMac able to stretch the defence with long leads and double-back moves, leaving the forward line open for Richmond’s version of Lynch and Hawkins to work their magic. Looking at the Jacks, they would have an incredibly hard time containing two power forwards, and if McDonald rolls in as the third marking forward, I am not sure they could combat it.

Maybe they could pray for rain?

Papley at ground level is a menace, and could be the key to this team, adding bite and great front-and-centre opportunities off the pack.

Some Toms who did not make the cut included Campbell, Fullarton, and Williamson

This team is getting smoked. The centre line looks strong, and the rucks would give the Jacks a bit of a belting (hell, I could contend with the Jacks in the ruck), but they’re painfully thin for midfield talent outside of Walsh, and not even he could carry this midfield against what the other two teams offer.

They also lack bite up forward, with Weideman playing the great white hope role he was at Melbourne through 2019/20. That didn’t quite work out. Good crumbers without being great, which is unfortunate, as I cannot see the forward line taking a mark against the defence of the Toms.

Sams that did not make the cut are as follows – Durham, Hayes, Lloyd, and Mayes

I could have added in the Lachies as well – there are 19 of them in the league, but with zero tall forwards and no rucks, they make the Jacks look like Giants.

So, Team Jack, or Team Tom. Who takes out the 2021 Mongrel Punt Given Name Championship?