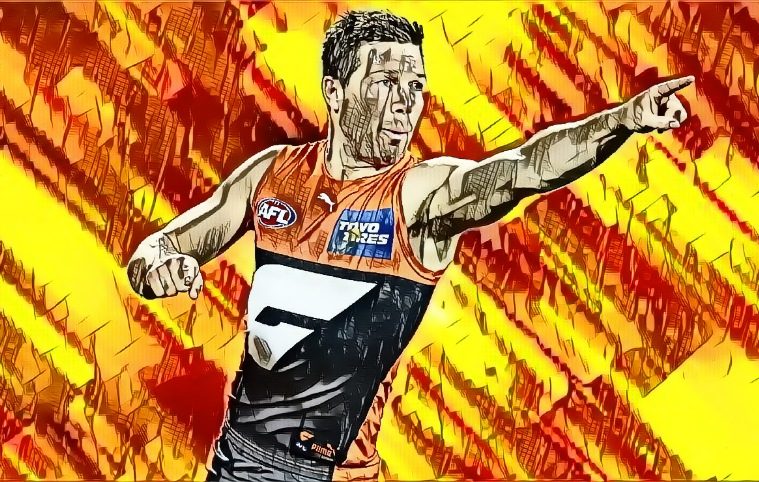 We all have our flaws. Some of us smoke. Others drink. A couple may dabble in the use of illicit substances. We may eat a little too much junk, exercise less than we should, and one or two of us might be guilty of something a little more nefarious.

I am a Toby Greene fan. It seems to be a major flaw with me, and as part of the fandom, I have become a Toby Greene defender, as well. Planting his boot in the side of Aliir Aliir to mark the footy? No probs… he was just protecting the space. Attacking the fallen Marcus Bontempelli as his Giants knocked over the Dogs in 2019? No issue for me… just flying the flag for his team. An elbow to the throat of Patrick Dangerfield? Yeah, it looked to me as though he was just trying to get his arms above the tackle, you know?

I’ve defended Toby, and I even started t do the same thing this weekend as the momentum gathered to have him hanged for his bump on Matt Stevic. The slow-motion footage provided by commentator, Brenton Speed, on Twitter seemed to indicate that there was minimal, if any contact between Toby Greene and umpire, Matt Stevic as Greene passed him. I watched the footage over and over – it was like a hypnotic form of dance, and it looked as though it may have been the evidence required for Greene to dodge a suspension and lead his Giants into another week of finals action. He missed him, didn’t he? They turned at the same time? Toby was going to be free!

The assassination of John F Kennedy happened long before my time, but the analysis of the world-changing event has been played and replayed millions… tens of millions of times over the years. Was there a second gunman? Who was that behind the grassy knoll? Did the shooter act alone. Was it an inside job?

Whilst the bow is a long one to draw, there was a feeling when watching the slowed-down vision that there may have been a second shooter in the Toby Greene incident this weekend – maybe it was a trick of the camera to make it appear as though there was contact. Maybe he was an innocent man after all?

And then the second angle emerged.

There was no second shooter. The grassy knoll had no one there. He was guilty.

Greene clearly made contact with the shoulder of Stevic as he pushed past him and headed to his huddle. My heart sank as I watched it, knowing there was no defending this. He strode straight toward the umpire – didn’t deviate. It was intentional, damn it. You would have to be blind miss where this case is headed.

The career of Toby Greene has been littered with incidents that have divided the AFL community. Mesmerised by his undeniable talent, his penchant for overstepping the line has turned the vast majority of footy fans against him. Not because he is a thug or because his actions are always callous – no, it’s more than that – it’s because there have been instances where his actions have cost his team, and this one might be the worst of them all.

Or at least the second-worst, after his suspension that sat him out of the 2019 Preliminary Final. Remember that one? Pepperidge Farm remembers. Lachie Neale remembers. GWS fans remember, as well.

If there was ever a study into whether players really did suffer from the condition known as white line fever, Greene would have to be the poster boy, particularly when it comes to finals. Playing with unbridled passion and allowing emotion to drive him, Greene has consistently crossed a line more often than an enraged Rohan Connolly on Twitter (look it up – it’s actually funny in a tragic kind of way). He has been fined or suspended in five of his last six finals appearances. What does that tell you about the level of control he has in his game.

I’ve long been a fan of the player that walks on the razor’s edge when it comes to the rules – my favourite all-time player is Dermott Brereton, but the modern game simply does not accommodate one who not only walks that edge, but slips off it more often than not. The system is not designed to cater to them, anymore.

And it was never designed to cater to players who push, or bump into an umpire.

As much as it pains me to say it, or in this case, write it, we may have seen the last of Toby Greene for 2021. He has made such impressive steps this season – he looked as though he had matured into the player, and character GWS needed. Assuming an official position of leadership at the club, becoming the focal point of their rally into finals contention, and leading them out in the absence of Stephen Coniglio for most of the season, Toby Greene looked to have turned the corner. It was obvious how highly the club regarded him – now, the rest of the AFL was seeing it as well. So impressive had his season been that it would not have surprised me to see him named All-Australian captain last wee.

The AFL really dodged a bullet there, didn’t they?

The Greene-Stevic case has been sent directly to the AFL tribunal, which bodes terribly for the GWS star. There was an initial hope that a fine from Match Review Officer, Michael Christian may have been the result incoming, permitting Greene to pull on the boots this week against the Cats.

There seems to be no way he can.

I am a Toby Greene defender. I admire his skill, his desire and his ability to lift his team. I am not alone in that regard – Scott Pendlebury was close to calling him the best player in the league prior to his incident with Stevic. Whilst the ump bump doesn’t change the perception of his ability, I would not be surprised to see such praise from fellow stars of the game wane a little until the smoke clears and Greene has a chance to redeem himself. Another chance, I mean.

Yes, I have been guilty of coming to Toby Greene’s defence a little too readily. I feel like an overprotective relative in that regard, but in the cold light of day, and with multiple angles confirming contact, it is with a heavy heart and a hell of a lot of resignation, that I concede that he won’t be playing next week. Maybe longer.

I am not rejoicing in the fact that Toby Greene will miss weeks due to this incident. I know there are plenty who are happy that he won’t be playing. They’ll bandy around derogatory terms to describe him and say it is what he deserves. So be it…. you won’t hear that from me.

But I cannot defend the indefensible.

Someone at AFL house will have the unenviable job of acting as counsel for Toby Greene this week. I hope they’re paid well. I’m sure they are. They’re on a hiding to nothing in this case.

Thanks for the season, Toby. It was great… right up until three-quarter time.