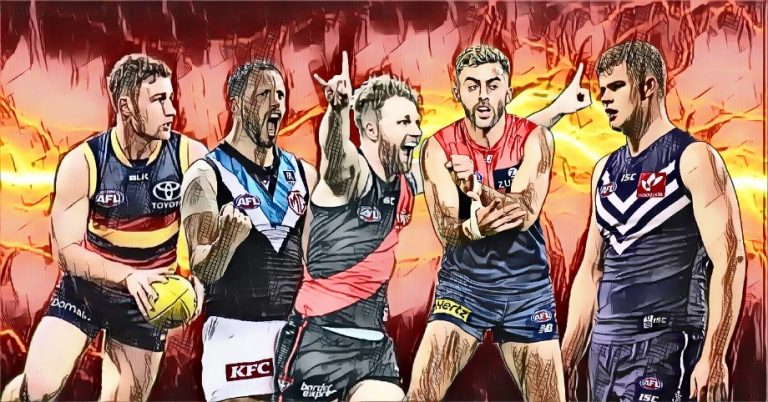 We don’t live in a perfect world. Far from it, in fact.

Every day there are errors, missteps and bungles. And I am just talking about the AFL, for the record. The wider world is much worse.

But for the purpose of this column, let’s just narrow in on one mistake, or one series of mistakes we’ve come to know as the All-Australian team. Last night, on the AFL’s night of nights that is not the Brownlow or the aftermath of the Grand Final… so the third best night, I guess…

What we saw with the announcement of the AA team was yet another side selected completely out of position, with some positions being completely ignored (there’s a reason we started the Wingman of the Year Award, here) and others being taken up by midfielders because… well, we just can’t get enough midfielders, can we?

So, given we all have an opinion on who was robbed, or stiff to miss selection, the annual Mongrel Punt All-Australian B-Team is here to save the day.

Can we make things right? No.

Can we make it even worse?

Can we give a little bit of credit to those who probably deserved a little more consideration?

So, here we go – The All-Australian B-Team.

Ridley started like a rocket before a concussion derailed him. His return was probably underrated by most but he remained a valuable intercept defender for the Dons.

Big Daddy, Harris Andrews takes the full back spot. After a slow start to the season, he really came back hard in the second half and had some hugely impactful games.

And Jack Crisp gets little love for his rebound work, and run and carry basically never rate a mention when we’re talking about the elite defenders in the league.

I reckon Christian Salem missed a spot simply because there were too many Demons already in the back six. With May and Lever on the last line of defence, I am 100% positive that this factored into his omission.

Jacob Weitering was painfully unlucky for the second season in a row. Holding the Carlton defence together, he has been punished for one poor performance this year – versus Nick Larkey. Other than that, he was fantastic.

Wingmen on the wing. That should be a rule for the AA team every year. As such, these two should feel slighted by their absence from the A-team. Seedsman and Amon were ranked 1-2 in our annual wingman of the year rankings and both played substantially more than Walsh and Merrett on the wing.

Walsh played most of Round 23 on the wing, with bumped his time spent there to 11%, whilst Merrett was at 4%. This is why some people turn their nose up at the AA team.

And another reason is because Travis Boak didn’t make the squad of 40. Can you believe that shit? They must not watch Port games. That said, I did hear a little whisper that Port didn’t nominate him? Is there merit to that? Surely not…

I would have had Stringer in the first team. There was simply no more impactful player in the game in 2021 than The Package. Basically, he played the role that Petracca and Bont were rewarded for in the A-Team and a spot on the HFF should have been his reward.

Like it or not, Buddy has defied the critics in 2021. His lack of games probably cost him a spot in the first team, but what a weapon to have in the B-Team.

And 47 goals from a forward who is not the first option is a fantastic return from Bayley Fritsch. He has done everything asked of him in 2021.

Say what you want about Tex Walker, but he was our number one ranked forward in our Mongrel 50 for most of the year based on his first 8-10 weeks of the season. Yes, things fell apart in more ways than one, but when he was on, he was on in a big way.

With the two best big men in the comp in the A-Team (what do you think about that?), we are left with the number three choice, and if healthy, he could probably match it with either. Doubt it? I reckon he drew even with Nic Nat in the derby – how many can do that?

Laird was unsung all season and may be the best transition from defence to midfield in quite a while. A former AA defender, he would combine beautifully with Tom Mitchell (who was the most prolific ball-winner in the game this season – not Jack Macrae!) as an inside/outside punch.

The last spot came down to two Lions – Jarryd Lyons and Hugh McCluggage. Inside or outside? I went with Lyons, as I felt he carried a huge load for Brisbane in the absence of Lachie Neale. Whilst McCluggage was great early, I had him ranked as the third-best wingman in the game this season, behind the two I have on the wings in this team.

Sam Taylor has been a wonderful addition to the GWS defence after sitting out the majority of 2020. If he plays 2-3 more games, I reckon he gives the A-Team a real shake.

And Luke Parker and Jordan Dawson have both been fantastic for the Swans as they have built a winning team and a winning culture.

So, there we have it – the Mongrel Punt All-Australian B-Team for 2021. How do you think they’d fare against the side the selectors ended up choosing? I mean… they would probably fall down in the midfield as they have about six fewer options in there.

Finally, before I head off, did anyone else find it a joke that when Fox was yapping about bench possibilities for the A-Team, they mentioned Kysaiah Pickett as a possibility? Seriously, we could do a C-Team and he wouldn’t get a look in.

And for our members, here’s how I would have had the A-Team.