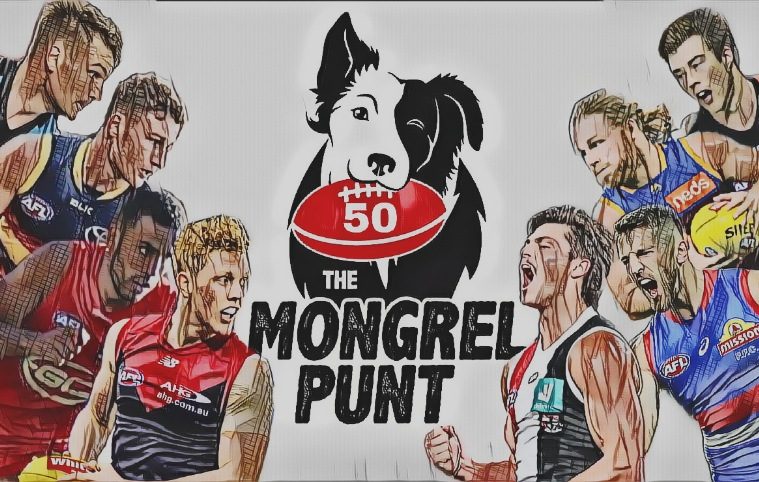 Those who have followed our work over the past year or two will be more than familar with the concept of the Mongrel 50.

Each week during the season, players are ranked on a statistical basis pertinent to their positions. Defenders are ranked in spoils/one-percenters, intercepts, rebound 50, and so on. Forwards are ranked in goals, score involvements, tackles inside 50, and so on. It’s the same for rucks and mids. Every stat assessed has a trigger players have to hit in order to receive points on a weekly basis. These numbers are then combined with both Coaches votes and Mongrel of the Year votes to give an overall weekly score.

During the season, these ratings have a strong emphasis on the last four weeks of footy, giving us the scope to capture those surging and those who have hit a healthy vein of gold in terms of their form.

However, this one is a little different. Usually, we’d have the last four rounds receiving a full 100% of the points earned, with a 50% hit applied to anything before. But this is the final version – all weighting has been lifted, and what we’re left with is the best of the best with no compromises.

So, should I babble on a bit more? Probably not.

You love to see it – the Dees superstar tops the list as he continues his quest to join the 400-club again. On 388 contested possessions for the season, Clayton Oliver is our number-one-ranked player of the season, and though you may support another team, I don’t think anyone can dispute just how good he has been.

With the quickest hands and best vision in the caper, Oliver is able to catch and release a hell of a lot better than me when I go fishing. His hands in the wet are hard to distinguish from the way he handles the footy in the dry. My old man used to tell me that the cream rises to the top when the ball gets slippery, and when confronted with wet weather games this season, Oliver has been amazing.

He hit the number one spot in Round 20 and his last three weeks only built on what he established. A great finish to a great year.

WHO JUST MISSED OUT?

Yep… getting nothing past you, am I?

Isaac Heeney was at 59, with his last month probably hurting him a bit.

David Mundy at 60, with his back half of the season a drop off from the first.

Charlie Cameron at 72, as he tended to really get going late.

Aliir Aliir at 73, with his game not really suited to this type of ranking, admittedly. It may be something I tweak for 2022.

Dustin Martin at 92… would have been in the top 50 had he continued playing. Missed the last five games and was just outside when he went down, injured.

Patrick Dangerfield at 119 is obviously due to the first half of the season where he basically didn’t play.

Jeremy McGovern at 127 is probably indicative of his year. Promised a heap and delivered a portion of it.

Lachie Neale had an injury-ravaged season. His 160th spot is evidence of this.

Adam Cerra is at 176 despite playing basically all year. And you’re willing to pay how much for him???

Jeremy Cameron down at 186 – injury

And that’ll do for that section. If you have any specific queries, the comments section juuuuuust below.

A bit surprised with Jake Lloyd being Sydney’s highest-ranked player. They had quality across the board this season, but his consistency has been incredible. Discounting the bye week, he missed scoring just once for the season. He hits those stat targets just about every damn week and plays his role as well as anyone in the league.

The mids are easy to look up yourself, but the other positions deserve a tighter focus.

Forwards started the season really well, as coaches struggled with the new “stand” rule., but it didn’t take them long to mitigate it, did it?

Tex was our number one player after the first four rounds, but it wasn’t long before the pack caught up. Interesting that even with him missing a few games, he still accrued enough points to sit in the top spot for forwards. When he was good, he was very, very good.

Really pleased to see Hickey in the top five for rucks. Underrated season, even though he has matched it with most of the big-name ruckmen, and put the lesser lights to the sword.

I expect Eagles fans will argue the position of Nic Nat in second. To pre-empt it, I’ll state this – when he is on the park, he is the best big man in the game… but he is not on the park ebough, and given this is stat/vote based, his time on the bench hurts him somewhat. At 80-85% game time, I reckon he is pushing for top five overall.

NUMBER ONE PLAYERS OVER THE COURSE OF THE SEASON

Once Bont hit the top five after Round 8, he remained there the entire time, never dropping to below fourth place.

So, tweaks to next year?

Already pondering the defensive ranks. At the moment they appear skewed to favour the disposal/rebound defenders – I was not pleased with Aaron Hall scoring so highly. I’d like to even that up with the contest killers a little.

Forwards score big when they do score, so I am a little reluctant to change things around too much with those guys. Consistency has been the issue with them this season, Started like a rocket – Tex was number one after the first four weeks and was still top five after 14 rounds. It can be done, and I don’t want this to be a forwards charity.

Anything else you think is missing, overplayed, or poorly represented, please let me know. All the best – HB.