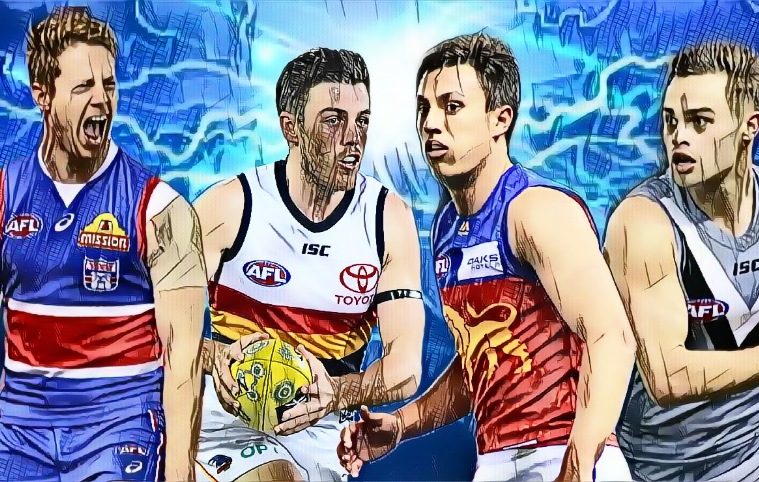 Last week’s column drew a bit of controversial response for some, and for the record, I’m glad for that. It means one: people are reading my ramblings and two: controversy creates differing opinions and despite things being said last week, I’m all about differing opinions.

But let’s veer back into the nuts of the great game and discuss something that has been a bother for so many football fans and analysis boffins alike: The All-Australian team.

Two big issues stand out with me every year they release the team. The first and most blatant is sticking midfielders in the forward line. Last year’s team was the most egregious example of this.

It’s true that Christian Petracca, Marcus Bontempelli and Dustin Martin are all goal-kicking midfielders, but the fact that Tom Papley and Dan Butler got overlooked because they are less of a household name is absolutely insulting.

It’s like having to watch your partner being forced to choose between you and Jake Gyllenhaal with her ultimately deciding that she is going to go and run off with him.

The second biggest issue – which really is just another extension to the first issue – is the lack of genuine wingmen every year. I can understand and to an extent, even sympathise every year that there are a ton of midfielders that do very well in their respective club and it feels as if selectors can be pressured into trying to fit everyone in.

Last year’s All Australian team had ten players in it that were primarily midfielders – players that featured more at centre bounces than anywhere else on the ground – two of them were named on the wing: Jack Macrae and Cameron Guthrie.

This is not me saying that neither Macrae or Guthrie deserved to make the team – far from it. Both were bloody fine players last year, however looking at genuine wing options who made the squad of 40 last year: Andrew Gaff, Hugh McCluggage and Sam Menegola – at least two of them deserved to make it and if it comes to the expense of a midfielder, well then tough shit.

I can think of at least three players that didn’t deserve their spot last year… I’ll let you take a stab at who you reckon they are – “reputation selections” I think, is the right term to describe it.

The year before we had Marcus Bontempelli and Tim Kelly named on the wings, and as much as I love both and how they play the game, neither of them featured on the wing that much

Before we head into finals, everyone is getting their say in who should be in their All-Australian team, because let’s be honest, who’s buying into whatever crap the All-Australian selectors are trying to peddle this year?

I’ve read perhaps four or five different All-Australian teams from fellow aspiring journalists and football nuts alike and whilst there are solid cases for all of them, they’re not my own team and it’s suffice to say I’m very happy with mine.

I won’t spoil our resident Mongrel, Matt Oman’s final All Australian side – it’s one that I think he’s certainly put a lot of thought into it both this week and over the duration of the season with his rolling team. We compared our teams through the Mongrel Chat this afternoon and he told me that he had eight changes in comparison to mine. He’s got his rational thoughts and I’ve got mine… at least I hope they’re rational, but I must say, I do like his team a lot.

Alex Miller – my podcast colleague and good friend – showed me his team on Monday. Quite a few out of the box suggestions including Alex Keath at full back, Zac Bailey at half forward and opted to leave out Jake Lever… Not sure about the last one, but the first two are decisions that I can absolutely get behind.

Both Matt’s and Alex’s team had one thing in common: Genuine wingmen in their right positions.

Earlier in the year, I was guilty of putting midfielders in my AFLW All Australian team, but realistically, the squad only had one wing option in there in Sophie Conway, and against the likes of elite-running midfielders such as Karen Paxman and Brittany Bonnici, Conway – as good a year she had for Brisbane – was never going to stand a chance with the official selectors either.

The wing position is a difficult position to really judge when we compare them to the inside midfielders, who racks up contested ball and clearances, the forwards that put the goals on the board consistently and the backs who intercept possessions and rebound the ball effectively.

I may have my gripes with certain wingmen afraid of going after a contested ball, but the truth is, that’s not their job. Defensively, I think they need to tackle, but I wouldn’t be too shocked if players baulk around them as opposed to someone as barrel-chested as Clayton Oliver – good luck getting past him.

Imagine asking the skinny kid off the bench in an under-17s football competition to go into the middle and try to win the football against a top-two team, the chances of him leaving that game in a body bag increase ten-fold.

Wingmen have a role in football that is just as crucial as anybody else on the field, and I’d wager that it would be one of the hardest positions to play.

As a Bulldogs’ supporter, I give Lachie Hunter a lot of crap for how he kicks the ball at times and there have been times over the years where I’ve questioned whether he goes in hard when he’s called upon, but if there’s one thing that I can’t knock him for, it is his work rate.

So many games have I seen him hold his width as an outside midfielder and continuously push himself to be a deep outlet pass, which is then followed by gut busting running to be either a link in the chain or like a couple of times this year, push himself forward to get on the end of a scoring opportunity, usually against the flight.

I’ve always had this theory of that’s why his set shot for goal is ordinary, because he spends a lot of his time busting his backside off running to provide the link in the chain – it’s quality work rate as a wingman and you’d have a hard time teaching it to the young and aspiring kids who potentially have a shot at making it down the line.

It’s an unproven theory, but when you look at the wing options that have made the squad this year, it might just be a theory that rings true.

Another aspect you look at with wingmen is how much meterage they gain. For years, I have found the statistic of metres gained to be a bit brainless. What do you gain from whatever metres you run and kick the ball? But the truth is, I reckon they help decide a game, even if it decides the game by just a fraction.

Rebounding defenders and wingmen are the most crucial types when it comes to gathering metres, but inside midfielders come a close third.

One thing that needs to be taken into consideration when we judge a player by the metres gained statistic is the kicking efficiency, it’s one thing to get the disposals and the meterage, but you’ve still got to be able to hit your mate on the chest.

Let’s use Paul Seedsman as the prime example. I think the consensus is that he’s the number one wingman in the game right now – chief Mongrel loves him, the chaps at A3 love him and it seems the mainstream media like him too.

He’s top three for the competition in metres gained, and if you watch how he positions and links up as Adelaide move the ball, you can see why he should be an All-Australian this year. Watching him against Melbourne the other weekend, there’s an engine and a hunger to work that is up there with the best.

According to StatsPro – you know, the AFL stats thing on the main league website? He’s not listed in the top 10 percent of elite midfield kicks, that includes wingmen. He kicks it at 65 percent efficiency, whereas you look at someone who has been crucified for his kicking in Jack Crisp – he goes at 66 percent efficiency.

Granted, this more of an ‘Apples and Oranges’ comparison considering Crisp is an intercept defender – a damn good one at that – but ranking players as elite, above average like this is a bit moot when you consider this includes players who have only played a handful of games.

I like to think if you’re kicking them between 65 and 75 percent efficiency in the way this game that relies on high pressure levels, then I reckon that’s elite enough – Simplicity in its finest form folks.

I’m happy Seedsman is named in the squad this year, likewise Karl Amon. Both are exceptional wingman players and I expect that if – and this is a massive if considering previous years – the muppets that name the team every year name a proper wingman, then Hugh McCluggage will be in the team this year, because he’s supposedly the poster boy of the wingman position.

He’s had a fair year, but personally, I’d go Seedsman and Amon based on squad selections. McCluggage has had a few games this year where his impact has been limited in comparison to the other two, and looking at the kicking numbers, he hasn’t exactly improved on what were horrendous percentages.

I expect Lions supporters will have me hung, drawn and quartered for saying that, but that’s just honestly how I’ve seen it this year – he’s done well to make sure he keeps involved in the play and feature on the scoreboard, but if he can somehow manage 20 goals in a season, he’ll be heralded as a god of his craft on the wing

I’ll throw down some averages below of each player and I’ll let you all make your own judgements.

All these stats below sort of highlight the kind of role the wingman should be in football one that can be that elite two-way running option, able to not just help run it out of the back line, but also provide themselves as a scoring option, or at worst, become a viable link in the chain.

In spite of all of this, I’m already prepared to concede that a panel of selectors that include the head of AFL in Gillon McLachlan, the head of morons in Steve Hocking and past greats such as Kevin Bartlett, Matthew Richardson, Warren Tredrea and Nick Riewoldt will again blatantly ignore the art of a wingman in favour of blokes that average 30 disposals per game playing more in the middle.

That’ll be enough to give you a white-hot aneurysm and force yourself to refrain from assaulting your television, isn’t it?