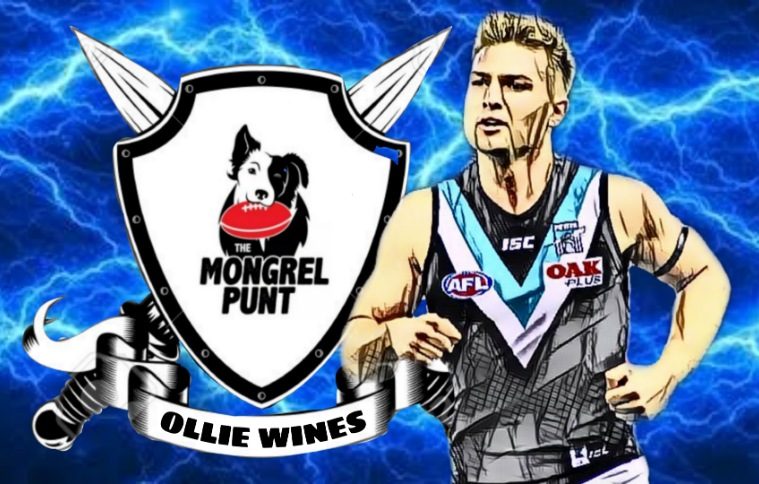 In 2019, the career of Ollie Wines was at a crossroads.

After a season that saw Port Adelaide break with tradition to appoint co-captains, in short, Ollie let the team down. The player they hoped he would become was still at least 12 months away and with rumours of a possible departure from the Power circulating (and perpetuated by many), there were some that looked at the faith the club placed in their budding star as a mistake.

A lesser man would have walked away.

A lesser man would have cut his losses, taken it on the chin that he had dropped the ball, and sought a fresh start elsewhere. It is the way of the AFL world at times, and sports in general – when something goes awry, you simply look somewhere else. There will always be those willing to take you in if you possess talent, and there was never any question about the talent of Ollie Wines.

As we reflect on the 2021 home and away season, one thing that stands out is the character of Ollie Wines. No longer the carefree spirit who injured himself in the preseason, Wines is now a dedicated professional, and the rumours and innuendo linking him to Melbourne clubs is but a distant, unpleasant memory. It has been the character of Ollie Wines that has helped turn Port Adelaide from perennial disappointment into AFL powerhouse, and premiership contender. Combined with veteran, Travis Boak and a host of precociously talented young stars and some fine recruiting, Port find themselves hosting a home final, and the expectations are high.

Just what has Ollie Wines been able to do in the last two seasons? What has moved the needle in terms of his game, taking it from that of talented young mid into one of the competition’s best inside/outside players?

Injury has to be a factor. Wines’ 2019 was over before it got started. As mentioned above, his water skiing accident in the preseason put him out of action and ruined his preparation – if there is one thing an AFL cannot do without, it is a solid base of fitness to build on. Wines was playing catchup for the entire year, and as so often happens, one injury leads to another, and another.

He finished his 2019 season determined not to be in the same situation again.

It seemed as though it became a common theme at Port. Travis Boak embarked on a unique training regimen, involving underwater exercises to test both his endurance and decision-making under pressure. Charlie Dixon returned in phenomenal shape and started to make good on the promise he’d shown for years, and Wines trained the house down to once again re-establish himself as the brightest of all the Port stars.

In a shortened season, with reduced game time, Wines began to repair his damaged reputation amongst the Port faithful and helped push his team to the brink of a Grand Final berht, succumbing to the Tigers in a heart-stopping Preliminary Final. He recommitted to the club, essentially putting any speculation of his desire to look elsewhere to bed. It was the action of a man who had come to realise what it takes to be one of the best – talent only gets you so far; hard work and commitment get you the rest of the way.

And so, Ollie Wines entered the 2021 AFL season with a point to prove. The co-captaincy was now in the rearview mirror, and though I am sure there are pangs of regret as to how he handled his time in a leadership role, you don’t necessarily have to possess a C next to your name on the teamsheet to be a club leader.

Wines started with a bang, registering votes in our Mongrel of the Year Award in the first two rounds before notching his first clear best on ground performance in Round Five. He would repeat that dose five more times throughout the season, including a devastating run of form Round 14-16, where he picked up the top honours three times in a row.

As we headed into the final rounds of the year, Wines had been so good, that it would have taken three best on grounds from those trailing him to knock him over. Several gave it a shot, with Clayton Oliver finishing like a train, but it was not enough to catch Wines. He’d done the work early, and done the work often. He finished the season six votes clear of the next-best competitor to claim the second annual Mongrel Of the Year Award.

Wines polled votes in 17 games, which… well, it’s bloody incredible. His consistency in 2021 speaks of a man who is now acutely aware of what it takes to be one of the elite in his profession. As we assess players on a 5-4-3-2-1 basis, it is important to note that Wines had 12 top-three finishes, which could factor in on Brownlow night.

There are many factors that feed into this Port Adelaide renaissance over the past two seasons. The shift of Travis Boak back into the middle has been enormous. The influx of kids into the system has lit a fire under those who had been there for years and given the team a spark when they need it. The hard work of players like Trent McKenzie, reinventing himself as a defender after starting his career on the Gold Coast and almost becoming a forgotten man in the AFL system, and the recruitment of players like Aliir Aliir and Orazio Fantasia, who have added new dimensions to both defence and attack.

Port have had their knockers in 2021 – every team has them – but at the end of the day, we sit back and head into finals with the knowledge that the Power sit in a very handy position and look like one of the teams to beat. And a huge reason behind this is the bullocking, take-no-prisoners approach to his footy displayed by Ollie Wines.

He is a deserving winner of the 2021 Mongrel of the Year Award.

Each week, the Mongrel team member in charge of reviewing the game allocates votes on a 5-4-3-2-1 basis. The results of this are below.

The more in-depth breakdown below, including the top 50 vote-getters, is for our Mongrel Members. It also includes commentary on some who didn’t hit the top five, and the reasons surrounding it. Thanks for all your support during the home and away season… we’re just getting started. Big things planned for the finals and off-season

The remainder of this content is for our paid members. Each week, the entry-level membership at The Mongrel gets these wingman rankings, early access to Good, Bad, and Ugly game reviews x 4, The Mongrel Punt Midfield Championship Belt update, and standalone articles. Want to join them?