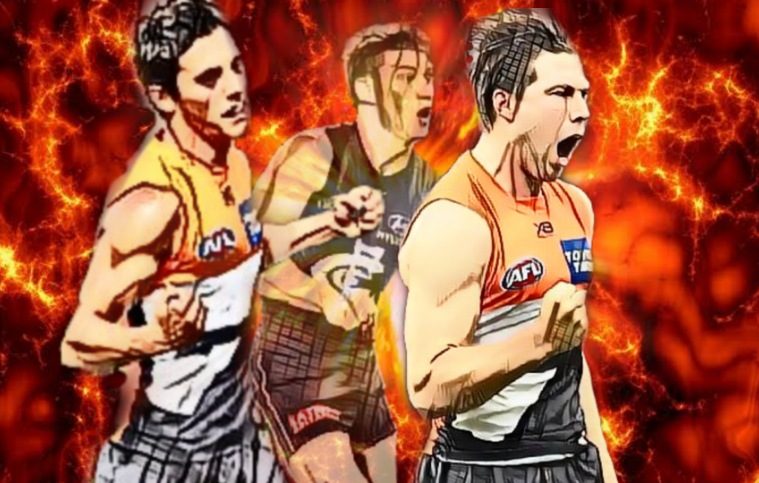 In the final round of the season, GWS took on Carlton at a locked out Marvel Stadium. GWS had a spot in the finals on the line, needing a win to punch their ticket to September football, whereas the Navy Blues had nothing but pride on the line, playing for outgoing veterans Levi Casboult, 350 gamer Eddie Betts and quite likely David Teague’s last game at the helm.

Carlton got off to a very good start, leading by 20 points midway through the second quarter, before the Giants clicked into gear and did enough to get over the line. However, GWS looked far from ready for a finals assault based on the intensity

Let’s take a look at how this played out.

Gameplan
In this match up it was the outside run of Carlton vs the inside grunt of the Giants. Carlton were more than holding their own until they lost returning skipper, Patrick Cripps to a foot injury early in the third quarter (more on him later). Carlton quite often got cut off going inside 50 later in the game. They eliminated the renowned Giants interceptors with slick ball movement and spacing, however, once the midfield lifted their work rate and pressured the inside 50 delivery, the Giants began to repel the Blues’ attack often.

A Fond Farewell
Carlton bid farewell to two club stalwarts in Eddie Betts and Levi Casboult. Despite not getting the win in their final game, both were telling contributors and can hold their heads up high as they exit stage left. As a footy fan in general it bought a smile to my face seeing both players go out in a way that was akin to the calling cards of their careers. The duo combined for four goals straight (two apiece) including a brilliant piece of play where Casboult was outnumbered 2v1 and tapped the ball goal-side to Eddie who finished off. Betts had a smile from ear to ear as he dazzled one last time, and got to kick the last goal of the match after getting through on an open goal, throwing a dummy, and finishing off with a banana goal for good measure, Casboult showed his trademark versatility, strong hands and willingness to work hard for his team no matter the role needed.

Running Of The Bulls
The two inside mids of Callan Ward and Patrick Cripps had very telling performances in this game. Although they did not go head to head they both had impacts in the coalface. Cripps was an absolute monster on the inside early, getting the Blues off and running with ten disposals and five clearances in the opening stanza. The ironic thing was that his movement was a lot better than it had been previously. Two of his clearances came from free kicks as his body positioning was exceptional – the Giants midfielder opposite often had no choice but to wrap him up. I’ve always questioned his effectiveness, and despite his use by hand always looking to get somebody involved, tonight’s performance was memorable for a reason that I don’t see as a positive.

The Blues co-captain equalled an AFL record Aaron Sandilands has held from 2011 for the most handballs in a game without a kick… SEVENTEEN.

Now… first off, his hands in traffic were absolutely exceptional, time and time again he was able to stand in a tackle and feed the ball to a teammate in the open. They feasted off it, they scored off it. However, is that acceptable for a 195cm 95kg midfielder?

Unfortunately, after he was subbed out of the game, his rival thrived and put the Blues to the sword.

Callan Ward was an absolute colossus for GWS inside and out. The man that is built from gristle wrestled the game away from Carlton when he sensed the danger. Ward had 28 touches, five tackles, kicked 2.1 and had 12 score involvements. As a primary inside midfielder he split his time, accumulating 14 contested and 14 uncontested possessions, as his workrate was a class above.

Changing Of The Guard
The All Australian team will be announced shortly, and you would be likely to see Jacob Weitering in the squad and perhaps in the final side in a key defensive post. He has been brilliant in this under-siege squad. His efforts and output are astonishing, and the scary thing is that he is still getting better.

He very well could be a multiple All Australian when his career is all said and done, and tonight he was brilliant with 14 disposals, eight marks, six intercepts and 11 one percenters.

I believe another challenger has arisen, Sam Taylor. The GWS key defender is the heir apparent to longtime skipper Phil Davis, as he is rapidly improving. He showed great instincts on the high ball, but also broke early on leads, chopping them off as well. Taylor has a game-high eight intercepts and equal game-high three contested marks to go along with 13 touches (100%) and eight one percenters.

The Dusty Role
It seems all the rage now is the midfielder that can hit the scoreboard often. First it was Richmond’s Dustin Martin, Christian Petracca and Jake Stringer have now emerged with Marcus Bontempelli close behind. Can the newest hybrid midfielder be Giant young gun Tim Taranto?

He has very similar measurables to Martin, and he has very deceptive core strength. I have a feeling next season, especially with the continued use of Tom Green in the side and perhaps more midfield minutes for Toby Greene, Taranto will be the newest addition to the most devastating type of player in the game. Coming off a four-goal game last week, he had another four scoring shots tonight but was only able to convert four behinds. With all the attention on the slick midfield of GWS, watch for Taranto to be a massive key in their finals assault. 29 disposals (16 contested) and a game-high 11 clearances in another commanding performance from the 23 year old.

Lock Him In
Toby Greene is a centre half-forward in a back pocket body.

He was opposed to Lachie Plowman, and once again he took the chocolates. He was brilliant without taking the game over. Despite kicking 1.3 with two more shots failing to score, he made the forward line tick. The most impressive piece of play demonstrated a new string to his bow, and the progress since he has been given a leadership role has elevated his stature in the league. Greene took a slip in the midfield as he attempted to play on and lost the ball, however, he recovered chased Plowman and caught him in a tackle, creating a goal for his team with the resulting free. If Greene can add consistent defensive pressure to his offensive skills, he will be a much more dangerous player. 20 disposals, 11 marks (3 contested)

Brett’s Blast: Josh Honey
During the first quarter Carlton managed to catch GWS napping. They created a fast break from a kick in, and after a 1v2 chase, it was Honey and Walsh against one Giant. Honey could have ran at the GWS defender and wiped him out, allowing Walsh free passage to an open 50, however, appeared to have zero interest in putting his body on the line for his teammate, so Honey made a bee-line for the goal square, effectively turning a 2v1 to a 1v1. Walsh and the defender clashed and the opportunity was lost.

This is an aspect that has crept into the modern game – players trying to get forward to be the next option when the ball is not yet won. Whilst Sam Walsh will win his fair share of contests, Honey could have made sure he did and then worked with the young star instead of gambling and losing. Hopefully, that is a lesson learnt.

Ed Curnow rewarded the Blues faithful with a game-high (equal career-high) 4 goals after not only signing a one year extension, but also getting out of the doghouse, and back into the action. This man needs to be in the midfield

Brodie Kemp has some serious wheels off half back, but also has a very high IQ and knows when to take the game on. Perhaps he can teach Adam Saad a thing or two. I saw the potential and limitation of Saad in a ten-second snippet. He showed serious pace to effect an over the shoulder spoil while heading back with the flight, yet followed that up with an inside out 20m chip to the hot spot that ended up lacing out an opponent. All this because his right foot is as reliable as Melbourne public transport. In a matter of seconds, he cost them the goal he just saved.

I’ve run out of things to say about Sam Walsh; it’s round 23 and everything that could be said, has been. This kid needs some help, as he accumulated another 29 touches, yet GWS were able to corral him at will, limiting him to nine kicks and 20 handballs.

It’s going to be interesting to see what GWS does with the ruck situation, as Briggs walks much taller when Mumford is there. Tom De Koning made him work very hard tonight, and it was almost like Briggs was waiting for a chop out. A date with Tom Hickey is on the cards, and Briggs will need to be much more physical if he wants to feature in the business end. That grab by TDK was something really special, especially when you slow it down and see that his body is near horizontal in the air when he wrapped it up

A fit Mitch McGovern is a game-changer. He attacked the football and player in possession for long stretches. He has some serious wheels when he really winds up, putting in an all out chase effort defending a switch, almost making up 40m of ground to affect a clearing kick and cause a stoppage in the centre.

The Giants’ forward pressure was outstanding, with them registering 19 tackles inside 50, Carlton provided minimal resistance with the solitary effort.

Josh Kelly looks much more settled since he has cleared up his future, and he was great again tonight. He has 61 touches in his past two games (32 and 29 respectively) and that coincides with his new extension.

Jesse Hogan needs to fix his kicking, as twice he was in two minds between snaps and drop punts from very easy shots’ that indecision could prove extremely crucial in the pressure of finals football.

Carlton need to watch some more video of Daniel Rich, as despite not having the penetration on his left leg, they have a real weapon in Nic Newman off half back. He was a vital link in the defensive 50 tonight. Liam Stocker played the best game in his short career off half back as well., winning many crucial 1v1 contests.