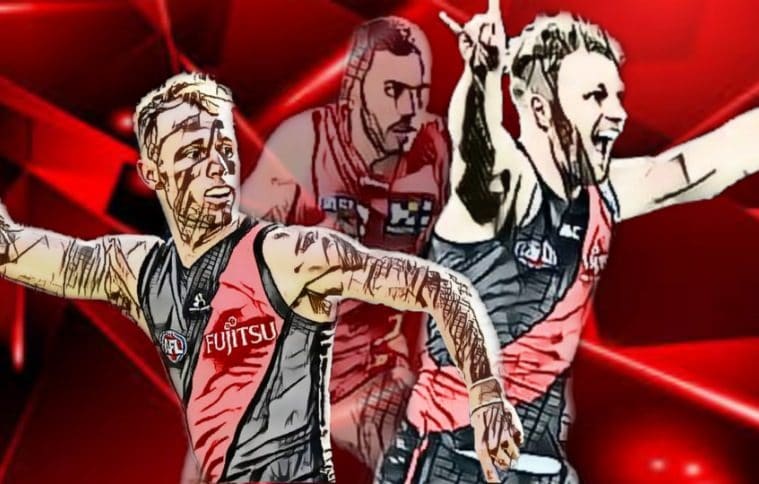 A Not-So-Quick Yarn about the Bombers and Suns

Earlier today, Essendon and Gold Coast headed to Victoria’s coast for an important match in the context of the top eight.

An empty GMHBA Stadium served as the impromptu venue for this clash but with the Bombers finals hopes on the line, the lack of atmosphere and unfamiliar environment did nothing to distract them from the task at hand.

After the plucky Suns all but ended Carlton’s finals hopes last week, Essendon was facing the possibility of becoming the Suns’ second finals-hopeful scalp in as many weeks. However, the young Bombers came ready to play and crushed any hope the Suns had of securing back-to-back wins well before the final siren sounded.

So how did it all unfold? Welcome to a not-so quick yarn.

Carrying over their momentum from last week, Essendon drew first blood early in the contest courtesy of Jake Stringer. The Suns steadied in the latter half of the term and tied things up following goals from young Joel Jeffrey and Josh Corbett, but that’s where Gold Coast’s day might as well have ended.

From quarter-time onwards, Essendon put it into cruise control and enjoyed a nice Sunday drive against an opposition with the cue in the rack. By half time the margin was five goals and true to the form of the round, things only got worse from there for the fading Suns.

Essendon managed six majors in the second half while holding Gold Coast to just a single goal, doubling its half-time margin.

Jake Stringer led from the front, booting a bag of five and putting in some really valuable midfield minutes. His hard work was matched by teammates Darcy Parish and Zach Merritt, who kept the Bombers’ engine room ticking over all day long with 35 and 32 touches respectively. Nick Hind continued his strong first year in red and black, serving up arguably his best game for the club with 30 touches and a goal of his own.

For the Suns, Touk Miller battled manfully as he has all season and Brayden Fiorini continued to boost his trade value. Young Noah Anderson showed plenty of strength around the contest but overall, this game was simply part of the young Suns learning curve.

The Package delivers on Sundays

Jake Stringer appears to be in the best physical shape of his life and his form this season supports this assertion. He continued to thrive in his forward/midfield hybrid role, kicking five goals and earning four clearances from his 19 possessions. IF Essendon is to play finals this season (which looks reasonably likely as Freo are giving West Coast the business as I write this), then Stringer is the key to ending the Bombers undesirable run without a finals victory.

Stringer has always provided plenty of x-factor, but something I’ve found in the past is that the term ‘x-factor’ is basically an excuse for inconsistency. However, this season, Stringer has broken the mould and can no longer be pigeon-holed as a forward with plenty of ‘x-factor’.

He is a genuine hybrid who can be just as damaging in the middle as he is up forward and more and more consistently, he has been incredibly damaging in both areas all in the one game – as he was today.

Gold Coast had no answer for Stringer’s mix of speed and strength; the match was played on his terms and he left opponents aplenty in his wake while en route to a best on ground performance.

Has Nick Hind been a top five recruit this year?

Short answer – yes. He’s had moments that would have frustrated Essendon fans I’m sure, but all things being equal, Hind has been exactly what the Bombers were missing off half-back. It’s not all about speed and finesse (see Saad and Carlton), brute force and relentless attack on the footy will go a long way and today epitomised this. Hind gets under his opponents’ skin and forces half-forwards to be accountable which I’m almost certain is their least favourite thing to be.

In the second term alone, Essendon kicked five goals off of plays initiated from its defensive fifty. The Bombers ball movement was electric and personally, made what was quite a droll game from a neutral perspective, exciting to watch. Handball chain after handball chain saw the Suns chasing tail but those donning the sash were too quick to catch.

Fans and opponents alike will recognise that this game style is not without its flaws. Run and dash is inherently risky as it leaves teams vulnerable on the rebound and it’s an incredibly tough game-style to stick to when things aren’t going your way – perhaps why the Bombers have been a little hot and cold this season – but man…when it works it works. Undeniably fun to watch, a great way to put pressure on the opposition and when maintained, the hardest style of play for an opponent to stop – September better watch out.

A King without a crown

Ben King is young, raw and his prime is well and truly ahead of him, but no matter how bad the service or how inexperienced the player, effort costs nothing. I’m sure if you asked Ben King he would tell you he’s trying his guts out and maybe he believes he is, but there is such a thing as reward for effort and four kicks and two marks isn’t much reward for anything.

With the Suns still in the hunt early in the contest, there were multiple contests that simply needed to be halved in order for Gold Coast to have a chance at goal. However, on each occasion, Ben King was comprehensively beaten by an opponent who simply wanted it more in James Stewart. Effort costs nothing and today King’s wasn’t good enough.

All that said, I would be remiss if I didn’t mention the Suns deplorable entries inside fifty. Bombing it long to the goal line where the ball can easily be knocked through for a behind really grinds my gears and this, in tandem with shallow floaters, seemed to be the Suns forward-fifty entry game plan.

I’m not sure Zac Smith is up to it. Five handballs and a grand total of zero marks simply isn’t good enough. I understand the reasoning behind his selection – height – but as pointed out by my Mongrel colleague, Suns fan Brett Hodgson, ‘Smith isn’t worth the height’. With his career hanging by a thread, the ex-cat needs to find something else of value that he can bring to the Suns sooner rather than later.

Speaking of careers only just hanging on, Jacob Townshend made some really boneheaded decisions after such a positive start to his Gold Coast tenure last week. Giving away two 50-metre penalties won’t put you in a coaches good graces no matter who you are, but from a second-gamer at their fourth club, it’s a great way to lose the faith.

In a game where the two sides were separated by 68 points, there isn’t much to be gained from looking at ‘key stats’. The score explains everything anyone needs to know but hey, it’s a part of my reviews so here we go.

Here is a list of other stats won by Essendon

Yeah…it was a belting.

Well, that’ll do from me folks. The Dons face Collingwood next week in another must-win clash while the Suns will face Sydney in a bid to end the season on a high. Cheers.