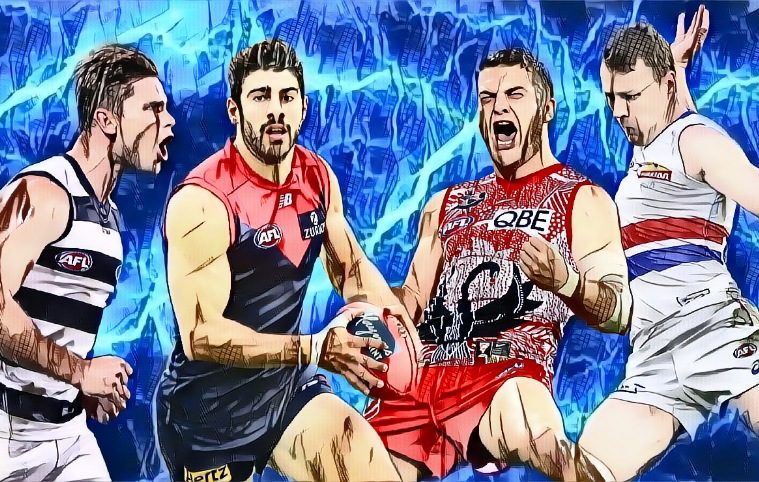 With two rounds to go, the top four looks almost set, with just a bit of position jostling to come. The bottom end is also becoming clear, with North Melbourne doing everything right, in losing competitively while hanging onto pick one in the process. Adelaide has firmed into pick two territory, while Hawthorn has moved ahead of Collingwood and will land outside the top five at the draft (assuming bids come for Nick Daicos and Sam Darcy). The middle of the pack is still one convoluted mess, but the Giants and Bombers have separated themselves and look the most likely to play finals from here.

21 rounds down, and the Rolling All Australian team firms once again.

With just two rounds to go, I have decided that our 22 will remain completely unchanged. Some players are still yet to fully cement their spots, and there are others still in the waiting room that just can’t get a foothold on a position in the team.

As we edge closer and closer to the end of the season, it becomes so much harder for our players standing on the outside to mount a strong enough case for inclusion. With now just two rounds left, it only leaves two chances for players to strut their stuff, and hope that any of our incumbents stink up the final two rounds.

Let’s talk about the unluckiest quartet in the AFL; midfielders Tom Mitchell, Touk Miller, and Bombers duo Zach Merrett and Darcy Parish. These four players have had magnificent seasons, and were excellent for their respective victorious teams over the weekend. However, when looking over the team, and judging all of our incumbents on their strength of form across the whole season, I was unable to mount a strong enough case to take any of them out, regardless of how amazing the unlucky quartet have been. Now, I understand what some of you may be thinking. How can Mitchell tear Collingwood to shreds with 44 disposals and 10 marks and still not be included? How can Miller steer the Suns to a Daniel Gorringe-tattoo getting victory over the Blues with his 34 disposals and two goals and not at least be slotted in on the bench? How can both Merrett and Parish continue to lead the Bombers towards September and still not find their way into the team?

The answer to all these questions can be found by looking at our incumbents. Marcus Bontempelli and Ollie Wines are the leading candidates to win the Brownlow Medal, and their work across 20 games has been exemplary. Clayton Oliver, Christian Petracca and Sam Walsh will also be in contention in the dying stages of the medal count. Jack Steele has been St Kilda’s best player by a country mile, Jack Macrae could be the best midfielder at the Bulldogs, in a year that his teammate is a runaway favourite to win the league best and fairest, and our two wingmen were excellent over the weekend, keeping their nearest challengers at bay. These seven men have all had excellent seasons, and the fact that they currently occupy the midfield spots (and interchange bench), holds significant weight. Possession is nine tenths of the law, and for Mitchell, Miller, Merrett and Parish, and plenty of other midfielders, time is running out very quickly.

Our six defenders have maintained their collective stronghold on their positions for most of the season. Half back is the most at risk position, with Bailey Dale only holding the spot for a week, and Christian Salem getting back to his best. Key defence is just about set with two rounds to go, unless one of Jacob Weitering or Steven May gets a couple of bags kicked on them, and Harris Andrews keeps playing blinders. Ruck is also near enough to set in stone, with Max Gawn clearly being the standout big man of the season, despite challenges from Sean Darcy, Nic Natanui and Tom Hickey.

We must also address Toby Greene. Greene has been sensational for the Giants in season 2021, and has singlehandedly put his team on his shoulders and dragged them towards September. Kicking four goals against Geelong to take his tally to 41 for the season, Greene has undoubtedly been the pick of the bunch when he’s been on the park, but injuries, isolation and now suspensions have robbed Greene of playing the full season. We’re at the point of the season where Greene’s body of work should hold up against any other small forward not currently in the line-up, but Greene has left the door ever so slightly ajar if anyone is brave enough to step through it. The closest competitor is Charlie Cameron, who admittedly hasn’t had his best season thus far. Cameron is just three goals behind Greene, but hasn’t had as many games of significant impact as Greene has, although Cameron has been more consistent, having played every game of 2021. If Cameron can put Collingwood to the sword with a scintillating performance, it could be just enough to overtake Greene, but at this point, it will take something special.

Finally, there’s our other forwards. With Taylor Walker and Josh Bruce now out for the rest of the season, albeit under differing circumstances, Harry McKay’s stranglehold on the Coleman Medal gets stronger by the moment. Tom Hawkins is also holding firm on the centre half forward position, as both Walker and Bruce were in contention to take his place, but now only Jack Riewoldt and Charlie Dixon can conceivably mount any challenge to Hawkins.

Our small forwards are a little more unstable, but all are holding firm. We’ve already spoken at length about Toby Greene, but what about Bailey Fritsch, Lance Franklin and Tom Papley? Only Papley had a reasonable game this past weekend, with two goals from 15 disposals. Franklin was kept very quiet, kicking just one goal from a measly five disposals, and Fritsch was kept goalless from eight disposals. However, aside from Charlie Cameron, no other small forward has been able to step up and challenge any of our incumbents, and I will not follow in other media publications leads and put a midfielder in a position they don’t normally occupy, just to fit more midfielders into an already bulging line-up. Aside from the aforementioned Cameron, the next best small forward not currently in the team is Anthony McDonald-Tipungwuti, and his form since the bye has been very average. In the eight games AMT has played since then, he has only kicked seven goals, and averaged just six disposals. Unless AMT has a magical final two rounds, expect our forward line to remain unchanged for the rest of the season.

I need to also address something. We’ve seen 18 different versions of this team, but now we’re getting down to the real business end of this season. If this week had a theme, it would be “time is running out”, and with this in mind, I’ve decided that this will be the penultimate version of the team that I will put forward. I could publish a team with one round to go, but will anything really change between rounds 22 and 23? So this is it. Everyone on the outer has the next two weeks to put forward their case. For some, that simply isn’t enough time, but for others, it could just be exactly what they need to finally get over that hump. Only time will tell.

Before I go, I must confess that I’ve been feeling a little flat since Sunday. This post-Olympics hangover has hit hard, and I don’t know what to with myself. Last week we spoke about our swimmers, but this week we need to go through our superstars outside the water. How good was Cedric Dubler sacrificing his own race in the decathlon and urging Ashley Moloney across the line in the 1500m! Or Kristy-Lee Barber fighting off the yips to claim bronze in the javelin throw. It was utter heartbreak for the Kookaburras, but winning silver in the field hockey is no mean feat, and Eddie Ockenden and his team can hold their heads high. Then there’s skateboarder Keegan Palmer and his goal medal winning exploits in the men’s park.

But the big praise has to go the leader of the Boomers, Patty Mills. Mills is the heart and soul of Australian basketball, and his leadership shone through in Australia’s triumph in winning its first ever Olympic medal. In the bronze medal match, Mills was perfect, and his 42 points put Luka Doncic and Slovenia to the sword. Australia’s most recognisable player is Ben Simmons, but who need Simmons when Mills gives his all every time he steps onto the court.

We’ve now reached the end of our time today. Until we meet again, stay safe my fellow Mongrels.