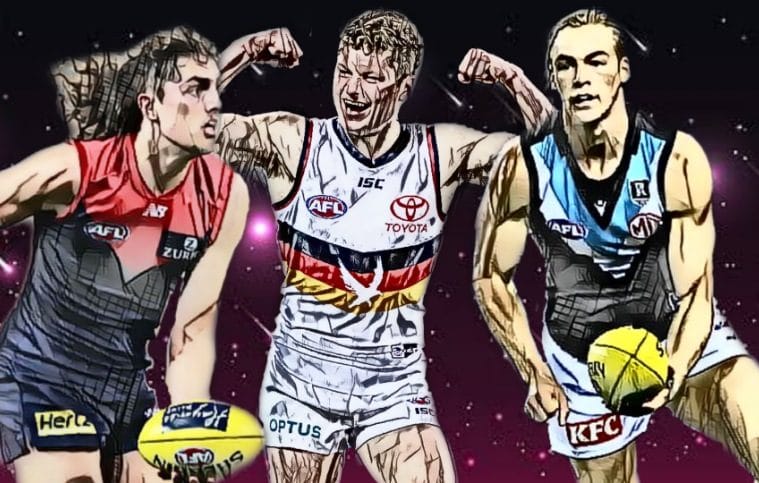 As we approach the final few rounds of the home & away season, chatter starts to get louder about potential winners of the AFL’s major awards, as we’ve outlined in our weekly preface one of the main reasons for the introduction of the ‘Mongrel Rising Star’ award was to remove the popularity contest element of voting at the end of the season.

Taking in some of the AFL media yesterday we were clearly shown some of the biggest flaws of the existing system. Damian Barrett, on his daily podcast, espoused Luke Jackson as the only possible winner of the award (on the back of four goals against the hapless Suns, and a prominent outing under the exposed glare of Monday Night lights). This illustrates the largely unconscious but considerable recency-bias that is allowed to flourish in the existing voting structure of this prestigious award.

Furthermore, there is often an element of how potential plays a part in where the panel place their votes. There was a good discussion on Bob & Andy on SEN Drive about this, with a general perception that this influences the voter, although it should also be pointed out there were two glaring examples to the contrary, Lewis Taylor (over Marcus Bontempelli) and Rhys Palmer (over Cyril Rioli).

Lastly, we’ll look at that dirty phrase in the AFL landscape, Victorian bias. Luke Jackson is a star of the future, and may very well become a premiership player as soon as this season. He has also had a strong season supporting Max Gawn and playing as the third tall forward in the top of the table Demon side. However, Sportstab odds of $1.40 (in from $7 in the past fortnight) only confirm the previous arguments I’ve presented as to why the current voting mechanism is far from the ideal method of determining the winner.

There was some movement in the leader board this week, Jackson was solid in the wet at Optus Stadium and jumped back into second place over the Swans’ Justin McInerney who has slightly down on impact in recent weeks, while Adelaide’s Harry Schoenberg leapt into fifth place, usurping his teammate, Lachlan Sholl who dipped out of the top 5 for the first time this season.

The Adelaide running man has hit a rich vein of form polling in four of the last five weeks to launch into the top 5. While he was ultimately on the losing side in this showdown thriller, no doubt Schoenberg figured in the meal voting behind standout Allir. In greasy conditions the young crow was the equal-highest possession winner on the ground with 31, driving the ball forward 534m and extracting six clearances.

His disposal can be a concern at times, however, and he recorded 15 turnovers, although on watching the game and relatively impact it did not appear as dire as that number suggests.

As predicted by this column, the impressive Port utility received a well-deserved official nomination on the back of a superb game in the Power’s narrow win against their fiercest rival. Bergman is surely a coaches favourite for his versatility in being able to play numerous roles for coach Ken Hinkley, and this match played primarily behind the ball collecting 23 touches.

He had a lucrative avenue to finding the ball with his seven intercepts helping contribute towards his 373m gained for his side, and capped off a terrific game with four clearances and tackles.

The second-year Demon has returned to form in the past few games after a flat patch through the middle of the campaign, confidently opposing the might of Natanui when called on in the slugfest on Monday. An impressive twenty one disposals were punctuated by six marks, three of which were contested and considering the weather this was especially meritorious.

Two clearances were slightly down on his usual output and one bad miss at goal which would have completely shut the gate after the restart areas he’ll need to improve if he’s to help propel Melbourne deep into September.

The Fremantle defender was up against it versus a rampaging Lions outfit, but held strong when many of his team mates couldn’t or wouldn’t. Gaining 487 valuable metres at 84% across 19 disposals with seven defensive 50 rebounds and ten marks had him as one of his side’s best in a disappointing performance with a finals spot on the line.

The North forward has been close many times this year to making the elite Mongrel list, but alas his flashes of brilliance haven’t sustained a full game – until now. He was terrific against the two-time reigning champs, his 18 disposals at the elite 84% well up on his career average of 10.5 and his second-best tally in his 29 matches to date. The addition of a goal, two direct goal assists and five tackles saw his finally crack it for a vote.

Cassandra, Tia Carrera’s iconic character in Wayne’s World famously warned that ‘labels can be dangerous, but they can also serve an important purpose in setting the scene or providing a cheap laugh, here at Mongrel HQ we’re not adverse to risk taking, so here goes…

Jake Bowey, the love child of Sam Blease and Matthew Bate continued on his merry way in just his second league match, 21 disposals borne from nine intercepts, along with three clearances has him a frontrunner to maintain his place in a finals-bound lineup.

Hugo Ralphsmith, the human fashion label (I’ve been waiting all season for this so please indulge me), the son of the former Hawk and Saint with flowing locks played his best game at this level, accumulating 17 touches, four one percenters and hitting the scoreboard with 1.1.

Thomson Dow, another of the Tiger cubs to get their chance in an out of form Richmond outfit starred with 22 possessions, four marks, two clearances and if not for wayward finishing might’ve nabbed two goals.

James Jordon, the hard-nosed Demon received a stay of execution as a late replacement for Tom McDonald and probably consolidated his position with 17 disposals, 7 marks, and an all over game sending the ball inside 50 three times, while also retrieving from D50 twice.