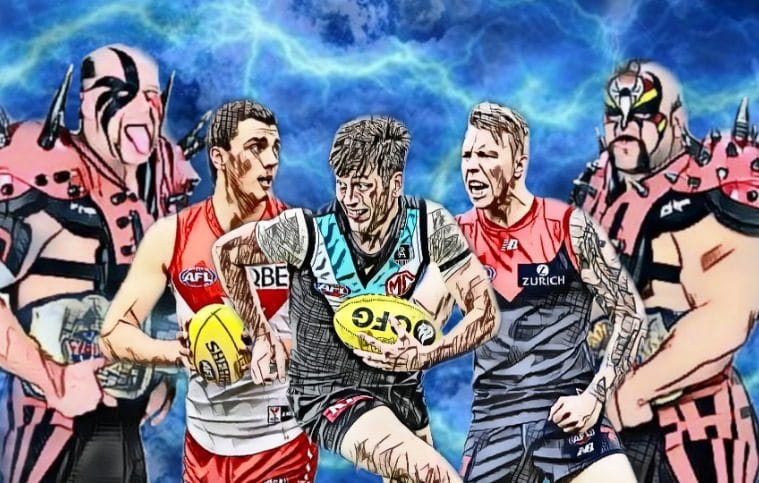 The Road Warrior Ladder – Round 21

The Demons were the big movers this week. With Port playing The Showdown at the shared home ground, the door was open for both Melbourne and the Swans to storm into contention.

Sydney fell over against the Saints, but the Dees took up the challenge in knocking over the Eagles, and are now knocking on the door of the top spot.

With two games remaining, the door remains ajar to take out the Road Warrior Award. At the moment, the Dees have only one more away game – at Kardinia Park against the Cats in the final round of the year. It is worth just two points, as it is an away game in their own state.

Sydney have North Melbourne this week and could still take top spot. Who know what happens with their R23 fixture against Gold Coast at this stage?

The Dogs are currently scheduled for a Tassie date with the Hawks, so could pick up four points this week, before playing home in the last round.

GWS are in a similar boat to Sydney and have two potential four point games against the Tigers and Blues to finish the season. They could come from the clouds to pinch this with a run of good form.

Can the Blues get off the bottom of the ladder? Hell, that’s a question that Carlton fans will have been used to over the last however-many years, right? Sorry Blues fans… you haven’t really played a lot of interstate games this season – you’re aware of that, right?

So, it looks as though we’re more likely to see one of GWS or Sydney make a strong challenge to the Power down the stretch. With Covid numbers through the roof in NSW, no games will be played there, meaning both clubs will have four-point games upcoming in the next two rounds. Port are going to need a big win over the Dogs on the road to get it done.

PS – who were the best “imitator” tag teams? The Rockers? They were basically ripping off the Rock n Roll Express. The Powers of Pain? They were Road Warrior clones. As were Demolition.

Amazingly, Demolition, despite looking as far removed from The Road Warriors as you can get when you dress in leather and spikes with your face painted, were the most successful of the imitator tag teams. Hell, they had people calling the Road Warriors “Demolition imitators”. I reckon that may have pissed Animal and Hawk off… just a bit.