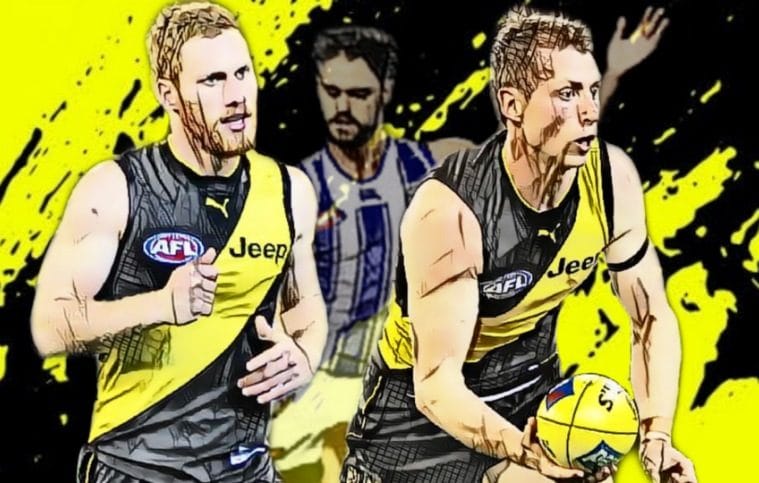 In a massive game at the MCG, cellar-dwellers, North Melbourne took on Richmond, who were looking to get back into the top eight. North had nothing to lose, Richmond had everything to play for, yet it was the Kangaroos that started off superbly, holding a 20 point halftime lead. That lead would be short lived, as the Richmond defence led a fightback, restricting North Melbourne to three second half goals as the side ran away with the game by 33 points

The Kangaroos game plan was very simple: “Use the corridor at all costs”

That attack benefited them superbly early on, as Richmond were not switched on for the kamikaze attack through the midfield. Led by Aaron Hall and Jack Ziebell off half back, North instigated multiple switches to regain the centre ground, and that enabled Tarryn Thomas, Jaidyn Stephenson and Luke Davies-Uniacke in particular to run riot, often causing overlap in their running patterns, that Richmond could not defend. However, with high reward comes high risk, and after half time hose risks stopped paying off. Damien Hardwick summed it up at half time, indicating that Richmond would take away the corridor and stop the Kangaroos short kick-play on game, and after doing exactly that, North Melbourne had no answer.

Once Richmond were able to force the run of North Melbourne wide, their interceptors took charge, combining with the ground fleet off half back.

The Battle Of The Southpaws

Lefty’s are an odd bunch aren’t they?

Don’t worry, I’m one myself. It’s always interesting to watch one in action, yet watching one go against another, it doesn’t look right quite right.

In this game, one of the best ever took on one of the most underrated in the modern game.

Both Nankervis and Goldstein were very very good for their teams, yet the numbers don’t tell the full story. The AFL career hitout leader in Todd Goldstein had the much better numbers, winning hitouts (32-16) and disposals (20-15) yet I gave the points to Nankervis slightly… Why, you may ask?

In the third quarter, when Richmond really started to fly, it was the physicality of Nankervis that transformed the Tigers midfield group. Missing the irreplaceable Dustin Martin, the Richmond midfielders were looking for a spark, and it was Nank that led the way. Amassing four tackles, two clearances, three disposals and winning three free kicks, Nankervis was able to help negate the groundwork of the Kangaroos midfield. Goldstein was still able to get his hands on the ball in the hitout department, however was less efficient with only ten handballs for the second half. If Nankervis won the battle, it was via a razor thin split decision.

North Melbourne midfield dominated the ball for the majority of the game, with Jed Anderson, Goldstein, Davies-Uniacke and Jy Simpkin combining for 23 clearances at the top of the board, for Richmond it was Nankervis leading the way with four. Furthermore, LDU, Aaron Hall and Simpkin combined for 109 disposals. The Richmond midfield group were a non-factor for a long while, but they got bailed out by their defence time after time.

After halftime, Dion Prestia and Jack Graham were able to tighten the screws in the open field, hurting North Melbourne on the rebound. Prestia, in particular, was sensational with 18 second-half disposals, and his work rate was a massive factor as he also chimed in eight intercept possessions due to the pressure Richmond’s half forwards began to bring. Graham was everywhere on his wing, in a true four-quarter effort accumulated 36 touches, eight marks, eight tackles and ten score involvements. Liam Baker was also released into the midfield and found the second half easier, accumulating 15 touches after the main break, as he feasted on the open space.

Both defences were very good in this contest. If ever you wanted to give Tom Lynch a call, just grab Ben McKay’s phone, because he had Lynch’s number all game long. Josh Walker had the task on Jack Riewoldt, and was helped often by Jack Ziebell, who floated across on multiple occasions to give a chop out. Riewoldt was able to get into the contest later in the match and hit the scoreboard, and he was forced to work up the ground a bit more often than he would have liked to, however kept Josh Walker busy. Robbie Tarrant was able to float off Callum Coleman-Jones at will, recording 17 disposals (92%)with nine marks and six rebound 50’s

At the opposite end of the ground, Cameron Zurhaar and Nick Larkey were able to hit the scoreboard early, and gave Nick Vlaustin and David Astbury fits at times. However, once the pressure lifted a bit in the second half, those two Kangaroos almost vanished from the game. Zurhaar kicked three first-half goals, finishing with four from his ten touches, with four marks and five tackles. Larkey could have had a much bigger impact, however, he booted 1.3 from his nine touches and six marks. Nick Vlaustin, Jayden Short and Dylan Grimes stood up for the Tigers. Vlaustin had a game-high ten intercepts with 30 disposals and 14 marks, Short added 26 touches and Grimes added 15 touches, nine marks and six intercepts

Early this week there was some news that broke… Star young gun Shai Bolton had turned his back on a return to WA, and extended with Richmond for a further two seasons. During the preseason, there was talk of Bolton being a superstar already, one AFL columnist already had him in the top 50 players in the competition. That caused me to really think about things, and I decided to stick my neck out with a take that I knew fully well that could come back to bite. Word for word I stated that “Bolton is the most overrated player in the AFL right now”

I could only fathom the buzz around him based on “potential”. However, there was talk of him commanding 700k per season plus. For a midfielder that averages just over 20 touches per game, four clearances, goes at under 60% by foot and gives you less than three tackles a game. He is a super talent, so I hope for the good of the game he makes me devour my words..

Moving on… Today’s first half reminded me of that one bloke that every workplace has, the guy that gets a pay rise but immediately follows up by being late the very next day. If Bolton wants to be paid like a star, he has to handle that attention, and for a long period he simply did not. He started the game with four turnovers from his first nine possessions, looking horribly fumbly and missing easy targets by hand and foot. At one point, frustration set in, the ball was in the centre square as Richmond were preparing to launch inside 50, and he decided to throw Kayne Turner to the ground twice, not only reversing the ball, but costing a 50m penalty and a goal to Zurhaar. In the second half, he was very handy up forward causing chaos with his evasion and IQ, however, there will be a target on his back for a while, as he looks to take the mantle of Richmond’s next great midfielder.

I’m not sure why it took Richmond so long to debut Maurice Rioli Jr. His speed was a massive weapon defensively, and it was great to see him kick his first goal in the AFL. What a shame it was with zero crowd, as they would have gone nuts. He seems like the type of player that should be left to play on instinct and chaos rather than a system.

Is there a more devastating weapon than Aaron Hall off the back of the stoppage? Richmond chose to leave Hall as the “plus one” so Grimes could float as the interceptor. Hall is putting together a career year, however, he always seems to be the one left alone at the stoppage.

Love the Player, Hate the hair…. Hugo Ralphsmith will be a very important piece in the “relaunch” of the Tigers. At 188cm he adds some much-needed size to the midfield brigade that is missing “vertical impact” and he always appears to get in good positions around the football.

Not that he was needed, however, I was surprised to see Jason Castagna as the sub today, as I’d assumed coming in that the Tigers would want to test out Ziebell and Hall defensively, and there are few opportunistic forwards better than Castagna.

Until he went down with an injury, I was very impressed with Jack Mahony. His evasiveness on the boundary line was a feature in a piece of play late in the third quarter.

I think Shane Edwards could benefit from less midfield minutes, his IQ is amongst the elite, and he would add another dangerous element to a largely misfiring Tigers forward group as they reach the business end. I suppose that may be unable to happen with Martin out for the remainder of the season.

I’m glad to see Matty Parker relish his second opportunity. Was able to get on the scoreboard with a very classy snap, swinging momentum for Richmond as they mounted their fightback.