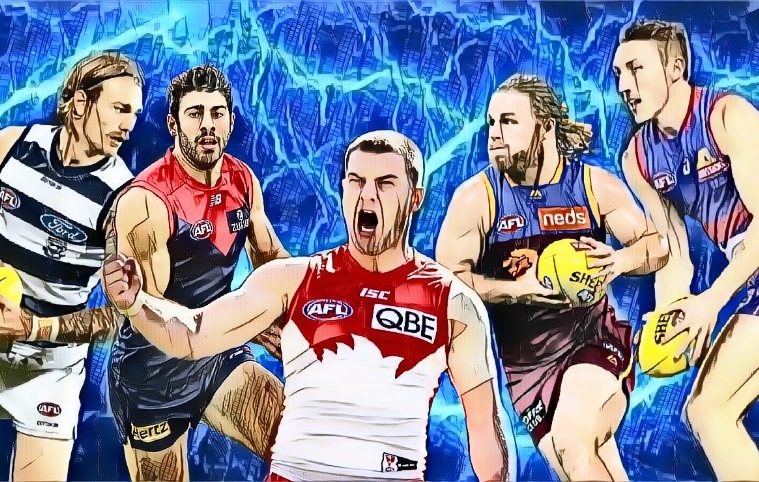 Jeepers, that sure was a week, wasn’t it! The Round 19 version of this team was posted on Thursday evening, and what occurred in the next 72 hours beggars belief. First, it was the bombshell out at Waverley, with the news that the succession plan had fallen apart before it even had the chance to begin, and Alastair Clarkson is now a wanted and available man. Then came Carlton doing a number on St. Kilda, putting the pressure right back onto Brett Ratten, amid all the talk surrounding David Teague’s own job security.

Our collective heads hit our pillows and we woke up on Saturday to the news that Queensland was all of a sudden riddled with the virus, and a super quick snap lockdown was called for 4PM. A VFL game was called off 10 minutes into the first quarter, teams began fleeing the Sunshine state quicker than Emma McKeon in Tokyo, and we were set for a Super Sunday of football madness. Upsets left, right and centre, with finals contenders falling over, and no one seeming to want to play in September. I don’t know about you, but after all that, I needed a long nap.

Now that we’ve stumbled through that eyebrow-raiser of a weekend, we look ahead to Round 21. The season just refuses to be stopped now, and we’re just about at the finish line.

What a season this man is having! Since moving to the back half, Bailey Dale has completely re-invented himself, and has allowed Luke Beveridge to change his structure and add more strings to the Dogs midfield by moving Caleb Daniel into the guts. Against the Crows, Dale was magnificent, amassing 31 disposals, five marks, five inside 50’s and five defensive rebounds. Of Dale’s 31 disposals, 25 of them came by foot, and his disposal efficiency of 83% was elite. This is nothing new with the 2021 version of Bailey Dale, and he is vital to the Bulldogs quest for this year’s premiership and beyond.

The combination of Tom Papley and Lance Franklin inside Sydney’s forward half has been a joy to watch all year, and with so many young guns around them, it looks like being the driving force the Swans need to propel them towards September. Papley has had a scintillating second half of the year, and his four goals against Essendon proved too much to ignore. Papley has now contributed 34 goals in 2021, including 14 in his past six games, and he is also averaging career-high numbers in inside 50’s and contested possessions, indicating that Papley has added another string to his bow by venturing further up the ground to contribute around the stoppages.

Just the two changes to report here. Pure half back flanker Bailey Dale comes in, so Tom Stewart moves back to his natural habitat of back pocket. Our midfielders had a slight shuffle around too, as Christian Petracca should no longer be looked at as a half forward. The inclusion of Papley meant shifting Petracca into the middle of the field, and Ollie Wines moves to the interchange bench.

Any decision I make from now until the end of the season will be considered by some as extraordinarily harsh. This is unfortunately the case with Touk Miller. I completely understand that Miller played out of his skin against the might of the Demons. Miller’s 34 disposals were clearly a team-high, and he also registered ten crunching tackles. But when looking at the balance of this team, I felt it necessary to make a small change, and that was the removal of Christian Petracca from the forward line. In order to facilitate the move of Petracca to the midfield, it meant dropping another to the bench, and in doing so, an interchange player had to make way. I could’ve done what other media publications have been doing and simply moved Sam Walsh to the wing. But to me, that’s a cop out. I had to make the difficult decision to omit one of our bench warmers, and when your team loses by near 100 points, unfortunately, you’re the one that has to suffer.

Speaking of harsh decisions, let’s talk about Jordan Ridley. After a barnstorming display a week ago, Ridley forced himself into our backline. But he just picked the wrong week to have a below-average performance, and when looking at team balance, it was always going to be hard for Ridley to retain his place given we already have a surplus of key defenders. Ridley only touched the ball 10 times against the Swans, and only one of those possessions was an intercept. Now, I’m sure some of you reading this will scorn me for this omission of an Essendon player, but I can’t play favourites, and of the four key defenders we had, Ridley was the one that didn’t put forward a strong enough case to retain his position.

As always, here’s how we look after the completion of Round 20:

It was an interesting week for our incumbent wingmen. Hugh McCluggage’s team was obliterated by the rebuilding Hawks, until they came flying home in an ultimately futile attempt to score an unlikely victory. Because of the avalanche going against the Lions, McCluggage wasn’t allowed his usual freedom to roam, and he only managed 20 disposals (of which 11 were by foot), down from his year average of 26. McCluggage’s 11 tackles also indicated the defensive work the Lions had to endure, such was the onslaught brought on by the brown and gold.

Over in Ballarat, and Paul Seedsman also had a forgettable day against the competition’s benchmark. It’s not that the Seed was dreadful, he did manage 22 disposals after all. It’s just that the usual spark was lacking, and the run carry we’re so accustomed to was nowhere to be found. When facing the Dogs and their army of midfielders, there has to be more than one player working the other way, and Seedsman tried his heart out all day, but if we judge him on this year’s standards, it’s best to chalk this performances up as one the poorer ones.

So with that said, who should replace Clug and Seed if such form continues? As highlighted in our weekly wingmen column for members (and you really should become a Mongrel member if you are yet to do so), Port Adelaide’s Karl Amon is coming home like a rocket. Amon was the standout player on Sunday evening, gathering 31 disposals at 90% efficiency, 10 score involvements, nine inside 50’s and 683 metres gained.

The other player is Geelong’s Isaac Smith. I’m sure when Hawthorn let Smith walk out the door, they would not have envisioned the form displayed by the wing master. On Saturday, Smith was superb against a dogged North Melbourne, amassing 26 touches, nine marks, and a whopping 718 metres gained. Smith is putting up 2014 style numbers, back when the Hawks were at their destructive best, and Smith’s form now compared to then is perhaps the reason the Cats now look so much like the threepeat Hawks.

I don’t know about you guys, but I’m really looking forward to this week’s Showdown. As the Mongrel’s resident South Australian, I’ve taken it upon myself to be our “Showdown correspondent”, and this time around, I’m really hoping Nicks and Hinkley play Seedsman and Amon directly against each other. Then we will be able to see who the true best in the world really is.

We also need to talk about our key defenders. There was much discussion in the Mongrel chat about Jacob Weitering, and whether his last two weeks have hurt him enough that his position would be in jeopardy. It is true that from a pure defensive perspective, Weitering hasn’t produced the greatest fortnight, with 11 goals kicked on him, courtesy of Nick Larkey and Max King. Could we possibly call these games Weitering’s mulligan? Last week especially, King had three goals to quarter time, and Weitering turned it around after that, restricting St Kilda’s young forward to just one goal after the first change.

But if Weitering was to find his way out of our line-up, there is only one candidate worthy of the call up, and that’s Brisbane’s Harris Andrews. Andrews is quietly putting together a fantastic second half of the season, and was seemingly the only player that stood up against the Hawthorn hurricane. In Brisbane’s defeat, Andrews was superb, gathering 15 possessions, including 10 contested, 12 intercept possessions, nine marks, and 16 one-percenters.

Finally, I needed to get in front of the incoming grenades, and talk for a moment about Zach Merrett and Darcy Parish. As stated last week, these two picked the absolute worst time to be mediocre, as they are now fighting against the tide. Both players were excellent on Sunday, with Merrett’s 35 disposals, seven marks, and 13 score involvements, and Parish’s 34 disposals, 10 score involvements and 19 contested possessions clearly the best for the losing Bombers, but we’re now getting to the point where an injury needs to occur for these two to force their way back in. Touk Miller was extremely unfortunate to be omitted this week, and I couldn’t justify dropping any other midfielder in order to bring either of Merrett or Parish back. There are only three rounds left, and for Merrett, Parish, and a smattering of others, it might simply be a case of too little, too late.

As always, I thought I’d end this session on an un-football related note. This week’s hot topic is the Olympics. How good was Rohan Browning’s blistering run in the 100m heats! Or Brandon Starc and his trampoline legs! I thought the Matildas were a little hard done by on Monday night, but Ellie Carpenter made a really stupid choice with only seconds remaining. Our aqua athletes have sure done us all proud, none more so than Jessica Fox, who not only won two medals in the canoe slalom, but was the driving force behind her event even being considered worthy of Olympic classification.

And what’s with Jamaica’s sprinters? First, they show no love to their fellow countrywomen for winning gold, then Shericka Jackson so arrogantly slows up in the 200m heats and misses the semi-finals, in an event she was supposed to be contending for a gold medal. I hope no Australian competitor never displays the attitude of Jamaica’s runners; their actions were totally unprofessional and they should be ashamed of themselves.

That’s all from me for now. Until next time, stay safe my friends.