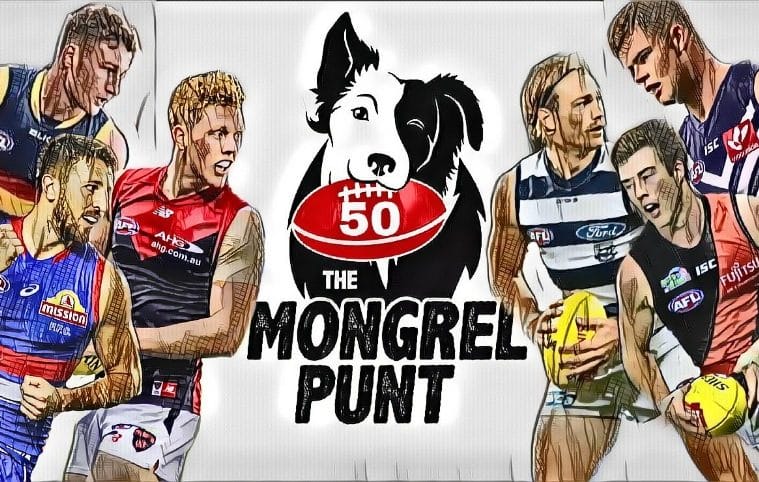 Another fortnight, another Mongrel 50, and… another player hitting the top spot.

A sudden blast of form from our leader sees him surge to the top, and leapfrog a couple of big names in the process. The Mongrel 50 does not play favourites, but given the result here, I cannot help but smile – the bloke is having a wonderful season.

Libba was a monster early in the season, and was pushing top ten for a while, along with his mates, Jack Macrae and Bont. I don’t think anyone is going to argue that the work he did in the first part of the season was as good as it gets in terms of clearances, and in doing so, he compiled some good scores, particularly through Rounds 6-10.

And then… he kind of stopped. A big week in R14 had him remain in the mix, but he was on a downward trajectory.

Coming into the last month of footy, he had points banked, but his four week total here is just 24 points, whist his amount being impacted with a 50% hit totalled 244. It spells trouble. You cannot rest on your laurels completely in this system – you must continue scoring, as your big games earlier in the season, though still important, are half as important as what you’ve done in the last month of footy.

And as a result… Libba drops out of the 50 this week. Ouch…

Round 18 ranks in parenthesis

ANOTHER NEW MAN AT THE TOP

This has been threatening to happen all season, with Oliver only once leaving the top ten of our Mongrel 50 in any of the rankings we’ve done this season. He has finished seventh in R6, ninth in R8, second in R10, eighth in R14, down to 14th in R16, and then jumped back inside the top ten with a fourth-placed ranking after R18.

And now he sits at the top of the heap.

Oliver is on target to record his second-ever 400+ contested possession season, and at 24 years old, it is scary to think that he could get better over the next year or two

SO, JAKE STRINGER IS STILL MISSING, I SEE?

That’s very perceptive of you. Allow me to explain… perhaps this fortnight I won’t screw the maths up!

Stringer currently sits in 52nd place overall with his R19 performance hindering his chances to jump into the list. He recorded a doughnut that week, but was strong in R20, with 34 points. He had 38 in R17 and just four points in R16. That means that 76 of his total 215 points received the 100% weighting.

If we removed the weighting completely, he would be in 61st position overall, so it’s not as though he would be better off if we focused on the whole season equally.

Just checked with the calculator… got it right this week. 😉

Forwards are still struggling to put together solid fortnights.

As it stands we have 12 of the top 20 running through the midfield, five defenders and three rucks. The highest-rated forward is Tex Walker at 21. His poor R20 outing cost him a place in the top 20.

BUT WHY THE LACK OF FORWARDS?

Some forwards are performing – namely Nick Larkey and Max King in the last fortnight, but their bodies of work over the entire season does not give them enough background points to elevate them into the upper echelon. Max King has been arguably the form forward of the last month. He has scored every week of the past four, totalling 100 points in the last four games, but when you consider his overall score is 209 (without weighting), it becomes obvious that the first 15 weeks of the season did him no favours.

Harry McKay is in at 28, after scoring 57 points over the last month, but his scoring pattern goes like this 0-25-0-32. One of those weeks saw him out again when he was due to play his brother. Oh well… maybe next year.

The Cats have just three representatives in the top 50 despite their stellar recent form. I suppose it speaks to their team balance, but also, they have been missing two stars for long periods this year who you think would normally slot in – Dangerfield (81) and Cameron (182).

The Dees have six players on the list, as they have a few players really standing out in their roles, whilst the Dogs have four, and also have Libba sitting at 51st.

Trav Boak is at 67, up from 75. An explanation is probably required for him – see blow.

Patrick Dangerfield is at 81 now, and climbing. He was at 87

Jeremy McGovern had a slight rise, moving to 151 from 170

That was poetry, by the way.

Boak is a really tough one.
Whilst I incorporate our own votes and coaches votes into the formula, each stat has a trigger in order to award points. The best example, in this case, is a simple one – disposals.
The trigger for mids is 30. Have a look at Boak’s year on afltables. Despite the consistent form, he has hit 30+ just four times.
Sadly, that is the case across a number of categories, which leads to a lower ranking.

I get asked this a bit. How would it look if you removed the weighting to benefit players performing in the last week? Well, once you start providing it, you can’t stop, right? So, here’s the top ten if we removed the 50% reduction on anything outside the last four weeks.

And to save the traditional fortnightly message asking for a breakdown when a Bulldogs player doesn’t make the cut, overall, Libba would be 34th with weightings removed. No names… you know who you are.

Which version do you like better? For Melbourne fans… much of a muchness. Dogs fans may like this version better.

New Mongrel 50 will be out after R22, with the final standings and all weighting removed after R23. For our Inner Circle Members, the Weekly Player Ratings that feed our Mongrel 50 are listed below for you to peruse.

This content is for our Inner Circle Members – they pay extra for this stuff to support us, so no whining! As part of the Inner Circle package, they also get access to our weekly player rankings, the X-Factor rankings as well as all the tier one content as well – wingman rankings, Midfielder championship belt, early access to Good, Bad and Ugly reviews, plus standalone columns. Wanna join them?