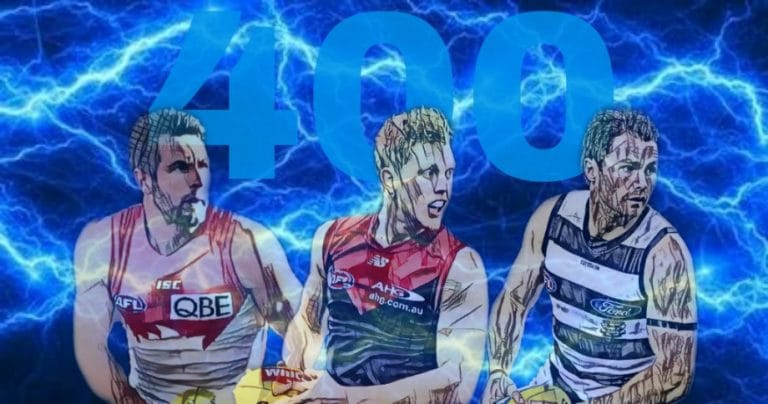 As Shaun Burgoyne rolled out to play his 400th AFL game a couple of weeks back, he joined an elite club.

Just five men have reached 400 games in the history of the V/AFL. The once seemingly unassailable mark, set by Kevin Bartlett in 1983 has now been surpassed by Burgoyne, Michael Tuck and Brent Harvey (who still had a bit of gas in the tank when he finished up). Dustin Fletcher completes the quintet of players to make the 400-Club, but there is another version of this elite company that no one really speaks about… perhaps for good reason, but I will let you be the judge.

The modern game of football changed drastically in the early 2000s. After the halcyon days of the 80s and 90s, where the style of footy largely remained open and free-flowing, teams started to focus more on defence first and everything else second. Contested footy and tackling became the skills most likely to see a team contend for a flag, and with that came the necessity for the onballers to be bigger, stronger and more durable.

Around this time, the AFL started to move out of the dark ages of basic statistical analysis and commenced the crawl toward advanced stats. There was a recognition that a kick was more than just throwing the ball on your boot and hoping for the best, and that clearance work was extremely valuable in winning the footy for the team and feeding the outside runners. Teams were aware of this for years, but now they were getting the hard data to back up their game style.

So, as teams searched for players to contest in the middle of the ground and at stoppages all over the park, no longer were they looking for simply the best-skilled practitioners. They needed size, they needed power, and they needed players with the ability to take a hit and still have the core strength to release the footy to a teammate. It was the age of the contested possession, and the biggest and strongest of AFL mids were in high demand.

Since contested possessions were recorded, just three men have been able to record 400 contested touches in a season, and Clayton Oliver is on track to do it for a second time in 2021. With three games remaining in the 2021 season (plus at least one final for the Dees), Oliver sits at 327 contested touches. At his current average of 17.2 contested possessions per game, it is reasonable to assume that he will clear the 400-mark around the first week of the finals, however, it’ll be touch and go if Melbourne somehow end up a one-and-done team, after such a solid season.

The highest number of contested touches ever recorded comes from Patrick Dangerfield, who crashed and bashed his way to 430 from 24 games back in 2017. He has also made the list another time, notching 403 from 25 games back in 2012.

Oliver’s best is 405, back in the 2018 season, where the Dees looked as though they may give their long-suffering supporters some respite before they headed west and fell to the Eagles in the prelim.

The undoubted king of the contested possession is undoubtedly the Swans’ Josh Kennedy, who has made the 400-club on three separate occasions. With 425 in 2016, 423 in 2012, and 410 in 2013, Kennedy made an art form of winning the hard ball and dishing off to a teammate. Now at 33 years old, the body cannot stand up to that type of punishment week after week, and JPK has gracefully stepped back to allow Luke Parker and George Hewett the opportunity to be the best ball winners in close.

Kennedy also went close to having a fourth season topping 400 contested touches, with 393 in 2015.

It is important to note that, of these players, Oliver is performing at an amazing clip. His first 400+ season came when he was just 21 years old. Whilst others were bigger and stringer at that point, Oliver’s ability to read the ball and put himself in the right spots to win the footy saw him simply beat his opponents to the right spot.

At 24, Oliver is just now entering his prime years, which is a scary thought. Whilst Kennedy’s three 400+ contested possession seasons reign supreme, the chase from Oliver is well and truly on.

Of the others, Patrick Cripps is probably the unluckiest to have missed out on a spot in the 400-club. Playing for a team that have not been part of finals, Cripps missed out on topping the mark by just 13 contested touches in 2018, and possesses the second-highest average of any player in the top ten, with 17.59 contested possessions per game. Tom Mitchell was also close, 12 possessions away from joining the club in his 2018 Brownlow year as the Hawks went out of the finals in straight sets. Dangerfield also had 388 contested that season.

Of the new breed coming through the ranks, Sam Walsh is the best 22-and-under player in this category, with 214 to date in 2021, whilst Port’s Willem Drew is next best at 179. Both have a long way to go to be in the same ballpark as Oliver.

The 400-Club may see others join over the next few years. Aside from the two mentioned above, Tom Green looks a likely candidate, whilst Caleb Serong shows the inside strength to win a heap of footy. Even Luke Davies-Uniacke may eventually give it a shake, but as of right now, we are witnessing something special from Clayton Oliver, and anyone who criticises what he doesn’t do, or what he could do, should take a bit of gander at what he does do.

At this moment, Josh Kennedy is the most consistent contested footy player the league has seen, but in three or four years’  time, it may be another name that holds that title. Clayton Oliver is well and truly on the way to making this category his own.

MOST CONTESTED TOUCHES IN A SEASON – THE 400 CLUB