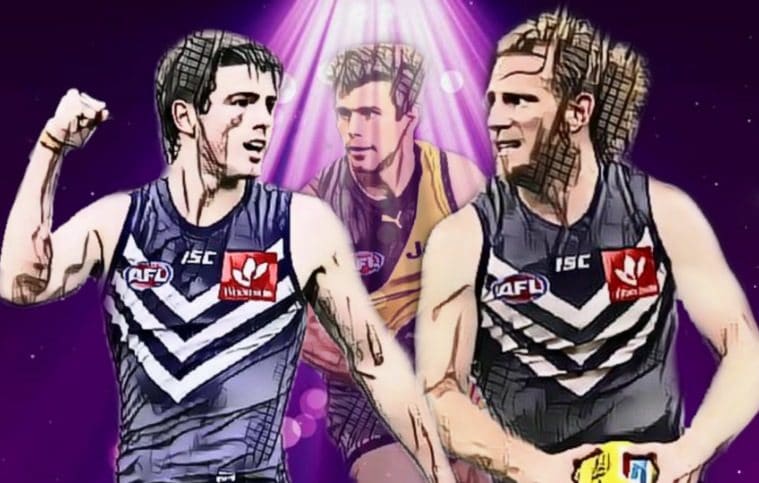 There will be people who look at the scoreline of this game and assume that it was a defensively led low-scoring contest. Yes, it was wet and windy conditions, and yes it was a ground that was becoming increasingly muddy, but this game was fantastic! It was tight, high pressure and had a potential top eight spot on the line. This is retro round and while the scoreline may not support it, this was a game that would have lived very happily in the 90s.

There were gruelling one-on-one match-ups that seemed to last all game long, a midfield battle that went to and fro and defenders from both sides that were willing to take the game on. But more than anything else, this was a game that went the distance and gave us one of the most interesting and exhilarating games of the year.

It was a game that promised a lot and delivered more – here are my four points.

I absolutely loved the match-up between Sean Darcy and Toby Nankervis today. Before the game, I thought that this would be a match-up that would decide the game whichever ruckman held sway in the contest would go a long way toward ensuring their side a victory. While this would eventually be the case, there would be a lot more to it.

I must admit, I have long questioned the impact of Toby Nankvervis on the Richmond midfield. A centreline that includes the likes of Dustin Martin, Trent Cotchin, Dion Prestia, Shane Edwards, Shai Bolton etc, surely doesn’t need an all-too-great ruckman feeding them the ball. It wasn’t until late in last season that I understood his impact on this team. His role is not to win hit-outs and create clearances; no, Nankervis’s influence is felt in the bit-by-bit lessening of the opposition’s ruck-mans impact. Think back on when you have heard about Toby Nankervis being referred to as a great player and I guarantee that it will be because he has nullified the impact the opposition’s expected dominant ruckman. This is not meant as a swipe at Nankervis – he is the best in the comp at the nullifying an opposing ruck-man (like some sort of ruck-tagger) – just as a recognition of the role he plays, and how dominant the Tigers midfield has been over the last four years, making the most of opposition ruck-man and how predictable their hit-outs have been.

Despite how effective Nankervis has been, Darcy had the better of him today. Regular readers will know that I am a massive fan of Sean Darcy, and I thought his game today, with 17 disposals, 18 hit-outs and six score involvements was fantastic. Yes, Tigers supporters, I hear you, Nankervis finished with 15 disposals, 17 hit-outs and three score involvements, but I call it as I see it. The Dockers won the clearances by 15, and while I agree that this wasn’t wholly attributable to Darcy, he certainly had an impact on it.

The reason, though, that I have decided to highlight this duel is because it almost perfectly summed up the retro round. This was two ruck-man doing battle with one another who are beholden to the champions of yesteryear more than they are an example of 21st century dominance. These were two big bodied ruck-man who were looking for a fight, and found one in each other. At times in the second half, it felt like they were meting out punishment against opposition midfielders only because they couldn’t gather the ball themselves.

As I said, I rated the influence of Darcy over Nankervis (and in fact think he should be rated in the top two or three ruck-men for the season) and without him and his four contested marks, it’s doubtful Freo would have won today.

You know who else Freo wouldn’t have won without today – Andrew ‘F***in’ Brayshaw.

About 30kg ago, I used to be able to run three minute kilometres. I know, weird flex, but believe it or not, this isn’t me trying to brag or anything. In fact that you think I might be trying to brag about running three minute kilometres probably makes me pretty sad, right? The point about it is that I had this phenomenal running coach. He was the kind of coach who knew exactly what to say and when to say it in order to get the most out of you. He was everything you could hope for in a coach, particularly when you are a teenager, and the type of person who inspires you to be leader throughout your life.

I know this feels like it may be a long build-up, but my point is that I wonder whether Andrew Brayshaw had a coach like that in his life. Ever since he turned up to Freo, I thought Brayshaw was a guy who would play 200 games, and with an effort like he put in today, that could easily be 300. He finished with 39 touches (15 contested), five intercept possessions, ten score involvements, eight clearances and 12 tackles. A more rounded game you are unlikely to find.

That he has played less than 100 games, has had more than 20 touches every game since round four, and has had more tackles to this point of the season than Luke Parker, Travis Boak and Joel Selwood indicates just how mature this kid is. And I say ‘kid’ knowing that he is only 21 years old. The other reason I bought up my running coach is that he made it plainly clear early on, it didn’t matter what your age was, or what your ability was, all that mattered was how much of yourself you were willing to give. How hard you were willing to use yourself.

One of the larger sub-texts of the game today revolved around both clubs unsigned young stars, Fremantle’s Adam Cerra and Richmond’s Shai Bolton. It’s long been speculated, by fans of either side, that a straight swap of talented youngsters would be recompense – Fremantle would be saying goodbye to a potentially great midfielder (who has yet to full prove that he can dominate a game), while Richmond would be saying goodbye to a dominant mid-forward who has won two premierships and at 22 years of age has his best footy in front of him.

I may be crazy, but based on what I have seen this is a deal that would be bad for both teams. I’ve seen Fremantle play a few times… in fact more than a few times, and I don’t know that I can point to any game that Cerra has been the most dominant player. I don’t think that I’m being unfair to him, either. His teammates, Darcy and Brayshaw, who were taken in the 2016 and 2017 drafts respectively, have both had games where they have been the most dominant player on the ground – heck, Brayshaw had his earlier today – and while I think Cerra is a neat player, I don’t think he’s worth the cost that Shai Bolton should charge.

That’s not to say that Freo should not try and trade Cerra for Bolton – it’s probably not the worst trade, but Freo don’t have a great history of trading for players who have already won premierships.

On a similar note, Richmond are in a funny spot where they probably can’t afford to get rid of Bolton nor acquire Cerra. Cerra’s not really the player that Richmond need (his kicking is nowhere near as good as is advertised), and Bolton is not a player that they can lose. Without Martin, and with a declining Cotchin and less-than-his-best Prestia, Bolton offers the Tigers midfield a hit of excitement and enthusiasm that they are sorely missing. Today he was largely positioned on a half-forward flank and I thought his lack of impact was one of the things that cost Richmond around the contest.

Similarly, while Cerra had 33 disposals for the game, his 64% disposal efficiency and game-high eight clangers cost Fremantle at important times. This game may have been viewed as an opportunity for both players to audition for the other team, but as is so often the case, it may be best for them to love the one they’re with.

As much as Richmond have been hit by injuries this year, there are still plenty of experienced players in their team. Their midfield counts the likes of Cotchin, Prestia, Shane Edwards and Kane Lambert amongst its parts, while the backline houses players like David Astbury, Dylan Grimes and Jayden Short. Heck, their forward line celebrated the 300-game milestone of Jack Riewoldt a couple of games ago, and still has Tom Lynch, Jack Graham and Jason Castagna calling it home.

I’ve just named nine multiple-premiership-winning Tigers, and while there were more Richmond premiership players that played today, I don’t think any of them could have claimed a significant victory over their opponent. Lynch was beaten by Griffin Logue, and Riewoldt was probably beaten by Luke Ryan. Matt Taberner beat the deepest Tiger defender (either Grimes or Astbury) while the Freo resting ruck-man created enough headaches to keep the other Richmond defenders occupied, allowing the likes of Lachie Schultz and Travis Colyer to hit the scoreboard (even if it was generally behinds).

The biggest impact, though, was through the middle of the ground. Today was one of the first times I have seen Richmond be genuinely sliced in half through the middle of the ground. Freo defenders like Hayden Young and James Aish (as well as evergreen midfield ball-user David Mundy) seemed to pick more holes in the Tigers midfield than there are in a standard Rom-Com screenplay. If their goal-kicking wasn’t so deficient, Freo would have probably built an insurmountable lead before half-time.

But that would have robbed us of one of the best halves of football for the year – a half where the ball bounced between both attacking 50’s, as if it was daring either side to kick a goal and seemingly end the game before going back the other way and asking the same question of the opposition. When Riewoldt goaled to put the Tigers up by nine points, ten minutes into the last quarter, it appeared that would be all she wrote.

But Freo’s youngsters had a few last efforts left. Schultz climbed above a pack of players to take a mark that will surely be nominated for mark of the year, before kicking the resulting set shot to bring the margin back within a goal. When Caleb Serong (via some hand-balling help from Liam Henry) snapped truly with a few minutes remaining, Freo hit the front and never looked back, recording a famous victory that sees them, on the back of their youngsters, finish round 19 in the top eight.

Freo’s win leaves them in the eight for at least the week, and they have their make-up home game from earlier in the season against Brisbane, potentially on Sunday, while the Tigers will face up against the rapidly improving North Melbourne at (maybe) the MCG on (I guess) Saturday afternoon.