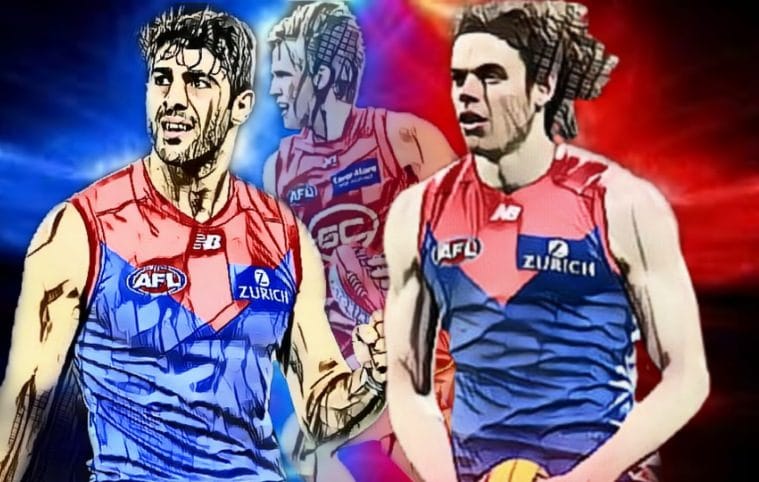 On a “Super Sunday” of football that was kicked off by Melbourne taking on Gold Coast after the game was relocated from Metricon Stadium to Marvel Stadium in Victoria amidst the Covid chaos, the Dees were looking to reaffirm their status as a true premiership contender after a few down weeks.

Gold Coast were looking to accept the challenge of taking on another 2021 powerhouse. The Suns’ game last weekend was a tale of two halves, as they took it up to Brisbane in the first half before fading badly.

Unfortunately, this game was almost a mirror image, however, their effort would only last for a portion of the first quarter. At that stage it was only a seven-point margin, as Alex Sexton caught the Demons defence lapsing in concentration, kicking a ball mid air from the goal line following a one-on-three contest from Jeremy Sharp. Melbourne however, would kick 14 of the remaining 15 goals for the match. Devoid of any leadership, tactics, effort or genuine desire, the Suns booted 1.2 after quarter time in an appalling display

Let’s take a look at this game, which had as much one-way traffic as the city outbound on a public holiday weekend…

Clayton Oliver was a class above his opponents in this game, plain and simple. The Suns tried multiple options early to curtail him, but he had a day out in the first half. First off they sent Sam Flanders (who almost seems to be getting a baptism by fire, after going head to head with Lachie Neale last weekend) to stop the Demon. Oliver responded to that match up with ten first quarter disposals and five clearances. Dew went back to the drawing board and sent former number one draft pick Matt Rowell to Oliver. Oliver proceeded to drag Rowell into deep water, adding another 13 touches, four clearances and a goal.

Suns Co-Captain, David Swallow then took the responsibility on, himself, to go to the Oliver, and somewhat quelled his influence. However, the damage was more than done, plus the sting had well and truly gone from the game. After it was all said and done, Oliver had a game-high 35 disposals, five tackles, nine score involvements, a goal and 12 clearances in a clear best on ground performance.

A Day To Remember And A Day To Forget

In this game there were two debutants and a player milestone.

For Ben King, he trotted out in game 50, as the leader of the Suns attack, and likely knew it would be a tough day at the office, opposed to Steven May – still the best defender the Gold Coast Suns have ever had.

King was completely shut out of the game, registering three handballs in the contest, as the midfield completely fell apart. For his part, May collected 16 disposals (seven intercepts) five marks (two contested) and seven one percenters in a pretty casual game.

Joel Jeffery debuted at Centre Half Forward for Gold Coast, and found the going rough as well. He collected five touches, and could have had a few more as the Suns midfield panicked at times and failed to look to him while he was able to create separation. Coming off nine goals vs Aspley in the VFL, it was always going to be interesting if he could bring some flair to the Suns forward line that has been severely lacking a scoring punch.

Melbourne debuted Jake Bowey at half back, and he was amongst the standouts in the first half with 11 disposals, rebounding at will. 13 disposals at 92% efficiency and almost a highlight reel mark over Darcy MacPherson sums up a great debut for Melbourne’s newest ginger.

Melbourne dominated the stoppages convincingly in the contest, holding a +24 advantage in hitouts and +17 in clearances. They absolutely tore any Suns resistance to shreds. Jack Viney managed to have some impact driving the ball into attack, with seven score involvements and seven clearances accompanying his 22 touches. Combining with him was James Harmes, who played a great all-around game with 23 touches, five marks and eight tackles, often giving Matt Rowell fits in the second half. Wingmen, Angus Brayshaw and Jayden Hunt were prominent, giving Jeremy Sharp, Noah Anderson and Alex Sexton a towelling on the outside. Brayshaw, in particular, was damaging, with his high IQ and setup at the back of the contest giving Melbourne a great “release valve”

For Gold Coast, it was once again Touk Miller leading the charge, with 34 disposals, ten tackles and six clearances. Melbourne did not send any attention his way, however opted to just go head to head with him. He wasn’t able to get any run forward, however, he supported his under siege backline whenever he had time to get back. Along with Swallow, Noah Anderson was able to get his hands on the footy, however, his disposal let him down on multiple occasions, as he went at 52% efficiency from his 23 touches and had nine turnovers. Anderson is only in his second season, but maybe he is just not ready to mix it with the big boys in the middle. Perhaps a move to half forward or even a look at half back could do him the world of good.

Land Of The Giants

Coming into this game, Melbourne were searching for an identity with their attack. It’s not been a short term issue either, as the Demons had gone 15 years without registering 80+ points in a first half of football. In this contest, perhaps they have found something…

Ten of 18 goals in this contest were kicked by the trio of Ben Brown, Luke Jackson and Max Gawn. Even more impressive, was that Tom McDonald was released to play as a high half forward, as he had often been Melbourne’s most dangerous avenue to goal. The Suns had no answer to dealing with the big men, as the Demons sliced through the middle with close to zero pressure from midfield, allowing them to record a mammoth 71 inside 70’s, and they looked to isolate Charlie Ballard and Jack Lukosius in the forays forward.

Ben Brown was unstoppable on the lead, Jackson showed off his agility in swooping for marks, and Gawn showed his uncanny skills, uncorking a banana from the boundary line that 95% of players wouldn’t be able to replicate. Only Sam Collins was able to offer consistent resistance, with ten spoils, four marks and nine intercept possessions.

The midfield dominance completely negated interceptors, Will Powell and Sean Lemmens, and often the Suns struggled massively to clear defensive 50 with any regularity or accuracy. The Demons attack registered 29 tackles inside forward 50, putting the Suns under constant heat.

I had previously bought up Gold Coast targeting Brown a few months ago, and that was met with swift rejection from the vast majority of the supporter base, as Brown was looked at as a very one-dimensional player, however, what he can do, he does very very well…

On Trac For Chas?

You didn’t think I’d forgotten this guy, did you?

The best “hybrid” player in the AFL was sublime once again, whether it was in the stoppages (six clearances, five tackles) or setting up play (ten inside 50’s, ten marks, 15 score involvements) he was unstoppable.

The thing that is associated with Petracca is quite often his strength, however, my personal opinion is that his lateral movement is the most underrated part of his skill set. Most often though, many players with great lateral movement over the years have been big angled movements, however with Petracca his most deadly moves are actually the minor ones. Just like a boxer, Petracca can tear opposition apart with his deft steps in the clinches, as the more explosive moves are often telegraphed. In the first quarter, he showcased this skill, gathering the ball about 60m out and put a small sidestep on two Suns defenders and launched a ball inside 50. It’s a skill that you may not see until you’re actually looking for it, but it makes him almost unstoppable, as there is zero warning that the move is coming. 32 touches for Petracca, in a game that almost appeared he never got out of second gear.

There are some serious questions needing to be asked of the Suns.

Six goals in their previous six quarters is a massive cause for concern. Now, coming into the game I doubt anybody was expecting a Suns upset win. Melbourne are a lock for the top 4, they boast the best ruckman in the game, the second best defence (points against), they have a top echelon midfield and are full of attacking options. The intensity and effort were non-existent outside of perhaps a ten minute span.

There did not seem to be a “plan B” in place, and despite Flanders’ showing on Neale last weekend, I don’t understand why a tag was not applied on Oliver from the first minute. Instead, Dew went with a part-time midfielder… almost demonstrating a lack of respect and underestimating the threat that Oliver provides. The Suns deserved a blast, and that has to come from Dew, and while I’ve singled him out, the playing group should also be held accountable. Seven Suns failed to get double-digit possessions. In the second half there was a prime opportunity to find out exactly what some of the Suns could do, for example:

Ben King was a highly touted defender- why not give him a shot at CHB?

Darcy MacPherson and Jack Bowes have added great value as midfielders in the past, yet they weren’t given a shot.

It’s pretty ironic that the heat will be on Dew once again, the same week that Alastair Clarkson announced his premature departure from Hawthorn. I fully expect the story to be played to death over the next few weeks. Gold Coast need to have a long look at their list starting immediately, and I expect the axe to be swung hard.

Kysaiah Pickett brings some real X-Factor to this side, however, I feel that he often tries to do too much, especially at times where the simple will suffice. That could prove costly at the business end of the season.

“Perfect game” for Jake Lever who had 14 touches at 100%, five score involvements, eight marks (three contested) and eight intercepts. Lock him in for the AA team immediately

Going up against the vaunted ruck tandem of Gawn and Jackson, I thought Zac Smith battled manfully. He was never going to win or impact the contests, however he often limited the effectiveness of the Melbourne tap work.

It will be very interesting to see how Melbourne get umpired in finals, as (along with the Bulldogs). The biggest weapon is the flick handball, and twice in this game the Demons were penalised for throws. The reality is, though, there are a ton of their pressured disposals that appear suspect in real-time.

Great to see Jy Farrar back in the lineup for Gold Coast, his disposal and confidence was evident in this game, despite a few shaky moments there was a passage of play where he swooped on a loose ball against three opponents and snapped a clearing kick on his left. Keep him in the side Stewy… the boy can play

I was expecting Bayley Fritsch to dominate this game, and he showed a silky finish from the pocket, and added a second goal from the goal line following a missed spoil, however, he seemed very passive, failing to stamp his impact in an All-Australian calibre year.

Alex Sexton had some impact on the wing for the Suns, it was a handy contribution from further upfield from what he is normally regarded for over his career.

Next weekend Gold Coast look to right the wrongs as they take on Carlton, whereas Melbourne come off what was like a bye today, to face the Eagles