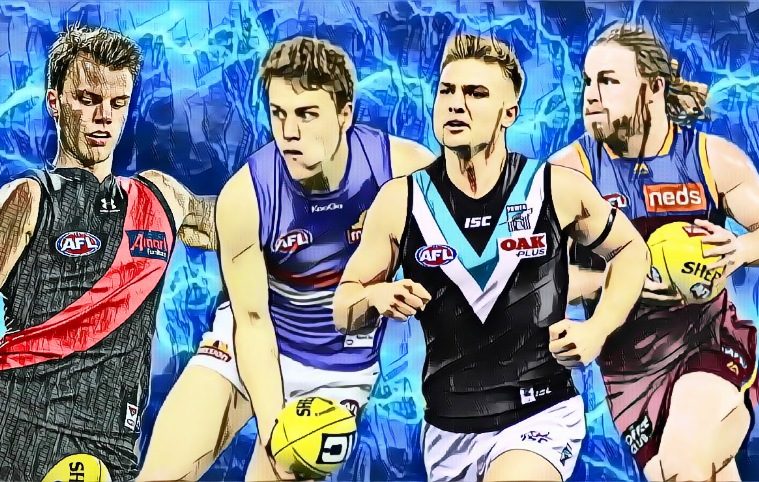 Good news, we’re free! Melbourne and Adelaide are tonight rejoicing, free from the shackles of COVID enforced lockdowns. Sorry to everyone in New South Wales that’s still doing it tough. I’m sure you, the person reading this, is doing so at home, and not breaking any lockdown rules. I only hope your fellow Sydneysiders pull their heads in and this pesky thing called COVID can be gone once and for all.

With Round 20 now upon us, the AFL continues to go full steam ahead, despite all the challenges of border restrictions. There’s light at the end of the 2021 tunnel, and we’re not stopping now. It’s also Thursday, and you know what that means. So, as Limp Bizkit would say, keep rollin’, rollin’, rollin’, yeah! I can’t find the song where they mention All-Australians though….

Just like Touk Miller a few weeks ago, Jack Macrae must be an avid reader of The Mongrel Punt. After being dropped from last week’s team, Macrae took the omission on the chin and turned out an ultra-impressive performance against the might of the Melbourne midfield. Gathering a game-high 38 disposals, including 16 contested possessions, Macrae was simply superb, his numbers also including nine clearances, nine score involvements, seven tackles and five marks. As Jerry “The King” Lawler once said, keep your words soft and sweet, because you may have to eat them later. In the case of Jack Macrae, consider last week’s words, eaten.

Last year was the birth of a very good defender. This year, it’s the building of and out-an-out superstar. Perhaps we’ve just become so accustomed to Jordan Ridley’s brilliance, that his excellence goes unnoticed. After another superb performance, this time against the Giants, we can ignore Ridley no longer. Playing a little further up the ground this year, Ridley has enhanced his already terrific rebounding capabilities, and along with Dyson Heppell, Nick Hind, Mason Redman and Jayden Laverde, Essendon has built a very solid defensive unit, and Ridley is the cornerstone that Adrian Dodoro will build around for a decade.

There really isn’t much to report here. With Jordan Ridley coming into the backline, it meant one of our back pockets had to move up the ground. Of the two, Tom Stewart is the more attacking threat of him and Lever, thus Geelong’s defensive trump card settles onto the half back flank.

Now, I know what I said last week. Whichever of Darcy Parish and Zach Merrett had the better game against the Giants would be included in the team this week. However, I didn’t expect both players to deliver their worst performances of the year. Maybe I’m being particularly brutal, but Parish has been starting to circle the drain for a couple of weeks now, and I have seen more than a few comments calling for his omission. With Macrae coming straight back in, Parish picked the worst time to be mediocre, and ultimately the decision around to who to drop was an easy one.

Another player on the chopping block this week is Christian Salem. It’s no secret that Melbourne’s form in the last few weeks has started to wane, and Salem is a casualty of that form drop-off. At his best, he is an elite user of the football, but it seems that other teams have to gone to school on Salem’s strengths, and negating his foot skills makes Melbourne as a team easier to defend. Saturday night’s loss to the Bulldogs was the perfect example of this, as the Demons weren’t allowed their usual freedom off half back to create attacking forays. Salem was restricted to 20 possessions, but more importantly, only 52% were by foot, which made Salem a much less threatening threat off the half back line.

This week, our esteemed leader, HB Meyers, penned an article highlighting the All-Australian credentials of one Rory Laird. It turns out that great minds think alike, as this author has taken notice of Adelaide’s new premier midfielder, and boy did Laird come close to being selected in this week’s team. On Saturday night against Hawthorn, Laird was a phenom, amassing 36 disposals, including 20 contested possessions, 10 score involvement, 10 clearances, and kicking two goals. It stands to reason that had Laird not been in a Crows jumper, Adelaide would not have beaten the Hawks, and if this form continues, Laird will not only be in the 40 man squad, he really should be included in the final 22.

One of the toughest spots to fill is each week is at small forward. Toby Greene is the incumbent, but he has missed five games, and still no one has stepped up enough to take his place. Perhaps the leading candidate is Tom Papley. Now, Papley’s conversion on Sunday did him no favours, but let’s look beyond that. Despite being seven goals behind Bayley Fritsch, Papley has only had two less scoring shots, and leads Fritsch in score involvements, 115 to 91. It may be too simple to suggest that had Papley kicked four goals from him six shots instead of just one, he would currently be in the team, but Papley’s last month has been excellent, and if Greene remains stuck in isolation, and Papley continues to impress, there could be room for change.

The other spot that is so hotly contested is at half back. Christian Salem’s form has started to dip, and a change was made in the backline. Ridley comes in; Stewart moves to half back. But now our backline has four talls (all of which deserve their place) and could be considered a little top-heavy. If one of our four tall defenders lose their place, it will more than likely be a small running defender who takes their place. So who are the leading candidates?

Two come from the same team, in Essendon’s Nick Hind and Dyson Heppell. We’ve spoken at length about Hind in previous instalments; he has missed just one game, is averaging 22 disposals, and is in the conversation for recruit of the year. But what about his skipper, Heppell? Since selflessly moving to the half back line, Heppell has reinvented himself, and his leadership in the backline has helped turn the Bombers back into a finals contender. Heppell has only missed three games this season, and is averaging 25 disposals.

Next we have two Bulldogs; Caleb Daniel and Bailey Dale. Like Hind, Dale has been around the mark all year, averaging 24 disposals at 80% efficiency. But Daniel has been equally brilliant, if not slightly better than Dale, and as far as I can see, hasn’t been getting the credit he deserves. Averaging 25 disposals, Daniel has drifted into the middle on occasions, as if the Bulldogs needed anymore midfielders, and is always there for an intercept mark when the Dogs need it. Daniel’s disposal efficiency is also an elite 80%, and he is also averaging career-high numbers in contested possessions.

We finish with another club captain that has reinvented himself in 2021; Kangaroo Jack Ziebell. This is another selfless move from a skipper, and one that has paid dividends. Ziebell’s main weapon is his disposal by foot, and his efficiency of 84% from his 26 disposals (21 kicks, five handballs) would certainly back that up. Ziebell has been excellent all year, but his form post-bye has mirrored his team’s. North Melbourne are a much more confident outfit when he is controlling the defence, and while Jy Simpkin is the heir apparent to the captaincy, Ziebell should be the one to lead this team for a couple more years at least.

Let’s chat for a second about Toby Greene. Everyone take a knee. Now, I know Greene has been stuck in isolation for two weeks now, and he’s missed five games overall. But has anyone else really stepped up to take Greene’s place? I could mount a case for Charlie Cameron, but he’s kicked the same amount of goals as Greene has, and in four more games. Cameron also hasn’t put his team on his back and carried them to victory, something Greene has had to do on multiple occasions this year. Greene would be unlikely to return to the Giants forward line this week, as even if he is allowed out of isolation, he would need at least a week on the training track before being fully ready to go. Greene will continue to be classified as “in danger”, so long as he continues to remain on the sidelines. But another small forward needs to step up and dethrone him.

What do we do about Jake Lever? Has his form started to dip? Is Lever falling victim to the same fate as Salem? On the surface it wouldn’t seem so, but opposition coaches are starting to work out Melbourne’s defence, and Lever, May, and co are getting easier to score against as the season has rolled on. Lever is still averaging 16 disposals and six marks, and against the Bulldogs he gathered 20 possessions, but Lever was restricted to just eight kicks, and he wasn’t allowed to roam free and intercept whenever the mood took him. Our backline is slightly too tall, and while every player over 190cm deserves their place, should a change be made, it might just be one of Melbourne’s twin towers that makes way.

Finally, just a quick word on who Rory Laird might replace, should his blistering form continue. The quintet of Bontempelli, Walsh, Petracca, Oliver, and Wines should all retain their place in the midfield for the remainder of the season, and our other incumbents have put together strong enough seasons that will make them difficult to displace. It might be a little bit harsh with only four rounds to go, but if a change needs to made, Jack Steele is, unfortunately, the leading candidate. Steele’s performance against the Eagles certainly wasn’t his best, with only 18 disposals and four score involvements. However, working in Steele’s favour was his 13 tackles and seven inside 50’s. Brett Ratten would’ve been very pleased with Steele’s defensive work, even though he was slightly negated from being an attacking threat.

Four rounds to go, and the race is heating up. Five clubs are still vying for the eighth position, even though no one seems keen to grab it. Elsewhere, several clubs are jostling for a place in the top four, with so many teams putting together strong cases why they’re the team to beat. So who will earn themselves a double chance? Can any of Sydney, Port Adelaide or Brisbane’s young guns propel them to the promised land? Tune in next week when we do all this again.