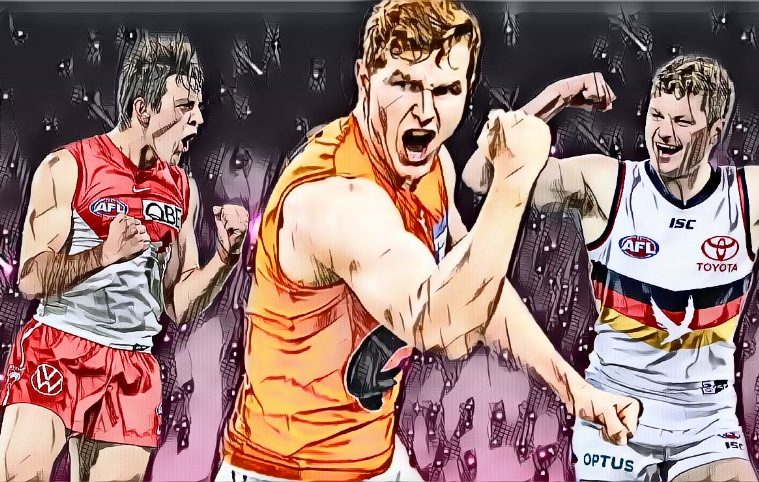 One of the reasons for the introduction of this weekly analysis with a unique voting structure was in response to the short memory statements of the mainstream media, and this week saw a flurry of activity. AFL staff writers anointed Cody Weightman a sleeper to win the Medal, primarily on the back of a mighty grab in the wet over Max Gawn. Now while this grab may well place in the mark of the year finalists, and for the older readers elicit some memories of Alan Ezard’s iconic leap over Justin Madden on a similarly wet day at VFL Park, the Dogs small forward is a long way behind the frontrunners in this award. Similarly Garry Lyon claimed Errol Gulden should win the Ron Evans Medal, now he did qualify his statement claiming he had the best football brain of the youngest intake, but these comments and indeed the end of season voting by a panel of part-time football watchers should be considered inadequate at best, and insulting at worst to such a prestigious honor.

No movement in the leader board this week, but Tom Green’s fifth 5-vote game for the season catapulted him to a fourteen vote lead with only four rounds remaining. He has also polled twenty coaches votes for the season and is in to $1.80 at the betting agencies, Gulden’s three votes moves him into outright sixth and within touching distance of the podium.

A product of the profitable NSW academy system, and grandson of former premiership Tiger, Michael the powerful Giants midfielder goes from strength to strength the longer the season runs. Complementing a prolific midfield containing fellow youngsters Tim Taranto and Jacob Hopper, the taller Green more than holds his own and was outstanding in bullying a stacked Bomber centreline and rendering them ineffective.

A season-high disposals with 29, and career-high kicks with 18 only told part of the story, as the Giant number 12 used his size to great effect pulling down seven marks and becoming a genuine option up forward in rotations. Six clearances, and six score involvements complemented his seven coaches votes as he took an almost unassailable lead in the inaugural Mongrel Rising Star award.

The workhorse Adelaide winger has hit a rich vein of form after a consistent season, recording 68 disposals, 15 marks, 19 tackles and 11 clearances in the past three games. This week against the Hawks he took his game to another level with a career-high 24 touches, three inside 50s, six rebounds from defensive 50 and eight score involvements.

He was duly rewarded with the official Rising Star nomination for round 19 and was considered the second best player afield by the coaches with six votes.

To describe the highly rated Swans rookie as clever does a disservice to his footy IQ which at least from a keen viewers perspective is more like that of a seasoned veteran. Body positioning in contests, angles utilised with the ball in hand, and an innate ability to defend space are all attributes of the fabled natural footballer, so often discarded in the professional era over the ‘athlete’.

What was almost every other club’s loss is Sydney’s gain, as Errol continued his fine season momentarily interrupted by a foot injury with twenty-three neat touches, five marks and five tackles (including an invaluable three inside forward fifty). Four clearances and a goal capped his match that was rewarded with two coaches votes.

Tough judge, Mr Mongrel? Surfer turned dynamic wingman, Jeremy Sharp collected a career-high 31 disposals but could only net two votes in a hyper-competitive week for the under 21 brigade. While Brisbane were busily reeling in a five-goal Suns lead at half time, Sharp did his best to stem the flow zipping up and down the ground collecting 18 touches in the fateful second half as part of 466m gained for his side.

He rebounded five times from defensive fifty and also took two marks inside forward fifty (among nine for the game) resulting in a goal to show his exceptional running capacity.

After a diabolical trade period for the Magpies last year the recruiting team left the draft with a smile upon their face, partially due to their selection of the younger brother of established Cat defender, Jack. Henry was right on the cusp of votes last week with three first quarter goals against traditional foes, the Blues but showed even more tricks up forward this week against the top four Power.

He had 15 disposals, seven marks (four inside forward 50) resulting in seven score involvements and two goals from five shots would have turned the heads of prospective coaches at the Holden Centre next year.

Harry Edwards, the West Coast beanpole was desperately, desperately unlucky to miss votes this week as he snared 12 marks, seven intercepts and six one percenters in a highly impressive outing. His sixteen touches were delivered at 100% in a stunning breakout game.

Trey Ruscoe, enjoyed the relative freedom of a backline role under interim coach Rob Harvey and prospered with six intercepts, eight rebounds from fifty among his 20 disposals and also crept forward to contribute a direct goal assist.

Finn Macrae, another reason for Pies fans to not be filled with dread and despair another younger brother of an AFL star, the midfielder played his best game at the level with a career-high 21 touches, a goal assist and two clearances.

Connor Idun, the dependable Giant defender was rock solid in their win over the Bombers, sixteen possessions at the elite 94% efficiency, nine marks and four one-percenters have his name written in permanent ink on the coaches whiteboard.