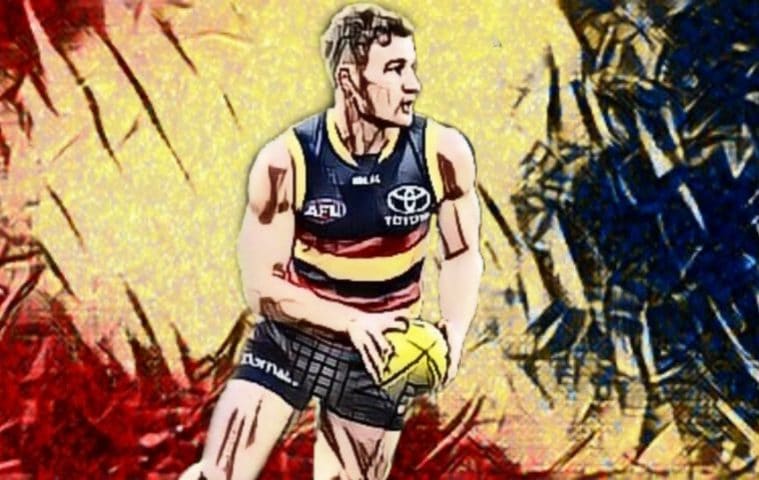 The Case For Rory Laird

If you listen closely, you might just hear a whisper.

It will be faint, and it won’t be from anyone with a large voice in the world of AFL Media – they tend to use that loud voice, but the whispers are still out there if you’d like to tune out of the everyday rhetoric and look for something a little different, perhaps something with a more critical eye.

You see, the current state of sports journalism, in general, is to go with popular opinion. There are only a few who make bold statements, and even then, you have to question whether they’re doing so because they legitimately believe what they’re saying, whether they’re staying “on brand”, or they’re doing what they normally do to generate newspaper reads or website clicks. It’s a bit of a minefield, but once in a while, you get a real piece of gold from one of David King, Kane Cornes, or the like.

Of course, you have to sift through a fair bit to get it.

So, what you end up with is the people with loud voices making statements, people with big ears and not much going on between them adopting those opinions as their own, and soon enough you have blokes on message boards and facebook groups (big shout out the Mongrel Punt Footy Group – great people there) echoing the opinions of others rather than forming their own.

And so it is this season that we have one man thrust into the limelight as a potential All-Australian on the back of some brilliant form, whilst another, just as deserving – if not more so, has been relegated to the status of “really good player, but…”

He’s a really good player, but there are others ahead of him?

He’s a really good player, but his disposals don’t hurt?

He’s a really good player, but he is not the flavour of the month?

His name is Rory Laird, and his 2021 season is deserving of your All-Australian consideration – there are no buts about it.

If we are being serious about picking players who have a huge impact on their teams, then Laird is a shoo-in. Whilst many will point to the career renaissance of Taylor Walker – and it has been brilliant to watch – the full-time move of Rory Laird into the guts, commencing in 2020 is paying huge dividends for the Adelaide Crows, who are a far superior team with Laird controlling the action from the middle.

Sadly, with the plethora of midfielders populating every Rolling AA team currently in existence, it is easy to get lost in the shuffle. On a team that sits in 15th position after 19 Rounds of footy, the chances of Laird being recognised as one of the best players of the year seem a little remote, particularly with no one flying the flag to support his case.

Hell yes – someone should! They’re doing it for someone else, and his team has won the same amount of games!

Touk Miller has been at the forefront of footy news for the last month or so. After a performance in the Suns’ upset win over the Tigers in Round 16, it was as though the average footy supporter got a slap in the face and were forced to take notice of what Miller was doing on the Gold Coast.

Avid footy watchers rolled their eyes as people jumped all over each other to lavish praise on Miller, who was in the process of compiling 12-straight games of 30 or more touches (it continues, currently). I mean, he’d been fantastic all year – if they’d actually watched Gold Coast games instead of conjuring stories about relocating them to Tassie, they would have already been aware of his form. However, once they had it in a prime time slot, it became impossible to ignore.

And so it was, as the Suns knocked over the Tigers, Miller starred… and people started to come around.

I must stress, this is not an attempt to undermine the All-Australian chances, or the season of Miller as a whole – he has been absolutely incredible this year for Gold Coast, and has emerged as the leader the Suns have been crying out for in the midfield. He continues to provide the heart and soul of a footy club often accused of being devoid of both, and completely deserves every consideration when the powers that be sit around the table and name their team of the year.

But is he having a better season than Laird?

As a particularly well-dressed meerkat would say, let’s compare the pair.

They’re pretty close to even, huh? Miller has an advantage in tackles, but Laird is ahead of him in three major statistical categories. How can it be that one is at the forefront of AA discussions and the other is barely mentioned?

Is that this type of form is expected of Laird? He has a history of racking up huge numbers in his tenure as one of the premier small defenders in the game. His 2018 season saw him top 32 touches per game and gain his first AA selection as a result. People don’t realise how tough it is to completely change your game and move into another position. Laird has done it seamlessly and continues to perform at an incredibly high level. He has done in Adelaide what Carlton were hoping Zac Wiliams could do. It’s not easy!

Many will point to the consistency of Touk Miller as the reason he should be considered above Laird – he has had 13 games in 2021 where he has topped 30 touches.

We don’t have a huge voice here, but what we do have is a forum that footy fans look to as an alternative to the mainstream coverage. We tend to look for the stories within the stories, and whilst Rory Laird may not be the name on the lips of All-Australian selectors or footy pundits, to ignore what he is doing in Adelaide is borderline negligence.

We have four games left in the 2021 season and there are some names that will undoubtedly be named as part of the AFL team of the year – Bont will be a walk-up start, as will Ollie Wines. Clayton Oliver and Christian Petracca have their names in the team, as well. With the way the team is structured (poorly, usually), we will no doubt see mids pushed to the wings and the half forward flanks. Throw in the bench and you have a total of eight or nine spots for midfielders.

As of right now, Laird sits fourth in total disposals, second in contested possessions, sixth in effective disposals, fourth in total clearances and 11th in total tackles. If he’s not in your calculations, it might be time to check your maths and ask for a do-over.

Rory Laird is having a career-best season and deserves to be in the conversation around All-Australian selection. It may turn out that he makes the squad of forty but is bypassed when the final team is named. As a matter of fact, I genuinely think that will be the case.