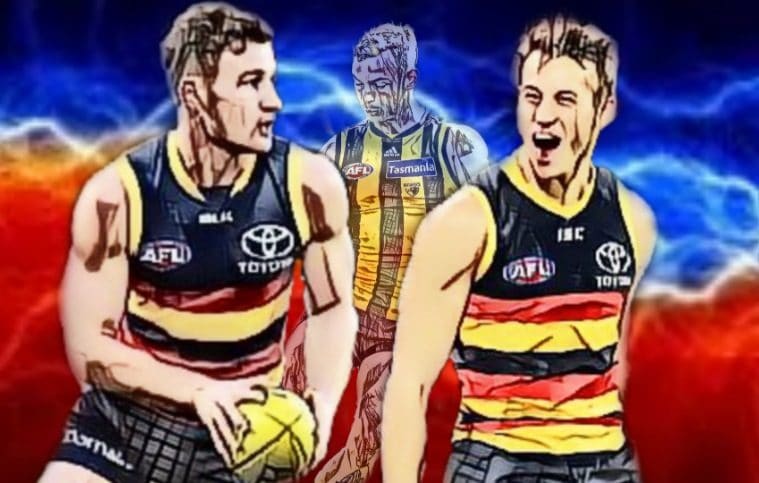 Ah, COVID times… a time where Adelaide plays a home game against Hawthorn at Marvel Stadium and it is completely normal and acceptable. What a time to be alive.

The previous time these two sides met during this season, it was a game of two halves and an absolute thrilling finish.

Adelaide came into this match with a streak of four losses and were keen to add some separation between themselves and the bottom few clubs to firmly rule themselves out of contention for the wooden spoon. Hawthorn came in off the back of a draw with the ladder topping Melbourne, so had every right to be feeling relatively good about themselves.

This match-up was a lot less anticipated than the one occurring across town at the MCG, but I had faith in these two teams to put on a good show under the roof at Docklands. Two young teams with not a lot to lose.

The first quarter quickly put to bed any notion of a boring game. Both sides left their defences at the door as they split ten goals between them including some strong marking, quick snaps, and long bombs from the centre square.

The game did slow in the second quarter as both teams ramped up their defensive pressure. I was surprised with how many strong hits and tackles were in this game. There were some serious defensive skills on display. I think Dwayne Russell made some “Brick Wall!” or similar reference about a dozen times. A late goal to Himmelberg saw the Crows take 14 point lead into the major break.

The third quarter picked up the pace again as the Crows extended their lead beyond 20 points before the Hawks made their move to get their noses in front for the first time since scoring the game’s opening point. However, Adelaide would respond and reclaim the lead and get the margin beyond 10 points going into the last quarter.

The Hawks would rally again and a nice captain’s goal from Ben McEvoy would see them close within a point, but the Crows never let them hit the front and eventually sealed the win with a clutch Taylor Walker set shot.

Let’s get into the stuff that mattered….

A fantastic performance from Laird in this match. A clear best-on-ground performance. It seemed everything coming out of the middle for Adelaide was coming from Laird. He looked like he was working really hard as well, as he collected 36 disposals and somehow continually found space through middle and proved to be a key link to some Adelaide scoring chains (ten score involvements will do that).

His gather and shot at goal late in the third quarter to steady the Crows as the Hawks were pushing was critical in helping them get over the line. I still don’t know how that ball went through the middle, though. He threw it on the outside of his boot with his momentum going the wrong way… talk about skilful. He delivered again in the last quarter to emphasise just how important he was in this match.

We get it Rory… you’re awesome. You already had 20 contested possessions and ten clearances to your name. Some would say your point was already made.

Speaking of points already being made… the resurgence of Walker this season has been great to watch and in this game, he was one of the key differences between the two sides. Walker finished with four goals and was a real presence out on the field. His battle with Hartigan was fantastic for those who love to see a genuine match-up.

My only real “what if” moment with Walker was late in the second quarter when he gathered the ball on the Crows attacking 50. He turned and had open space to take his couple steps and nail a relative chip-shot goal when thinking about how far he can kick the footy. Instead, he passed it to Himmelberg. A great show of faith in the young guy, but as one of the leaders of the club with a young playing group, surely Tex should be kicking those goals at half-post height.

Walker kicked the crucial goal in the last quarter to kill off the Hawks final effort to keep the match competitive. It seems to be the sort of goal Walker is becoming known for nailing this season, as he has done this numerous times. He did his ongoing push for an All-Australian nomination no harm in this match.

Another strong performance from Worpel in this match. He fought hard, sometimes trying to do a little bit too much, but can you really fault Worpel for that? A bit sloppy with a couple of his tackles, and also with some of his delivery inside 50.

Worpel worked tirelessly to keep the Hawks in this match, sometimes in spite of himself. He collected 28 disposals (11 contested), delivered the ball inside 50 nine times and had five score involvements (one of those being his own goal), which is an indication he didn’t quite nail some of his delivery. However, he did also have over 500 metres gained and combined quite well with Mitchell and Wingard to form a pretty decent midfield combination for the Hawks.

Geeze this kid looks good. A mature-age recruit out of the VFL and he is a testament to that league. He came into the Hawks team just over a month ago and I noticed him when I covered their game against Port Adelaide. He just seems to keep improving each week and really repaying the faith in the Hawks.

Playing on both the half back line and Wing positions, Brambles biggest assets are his run and dare and his kicking. Often collecting the footy and driving it long in the Hawks direction. There was no ill-fated bounce this week, but he sure can run himself into trouble sometimes. BUT, you can absolutely wear that as a fan for a player who breaks lines and looks to be creative and actually give your team a chance to score. Sure, it’s not quite paying off just yet in terms of the scores, but given a bit of time to develop and you can absolutely see Bramble becoming a reliable driving force for the Hawks.

Apparently, this guy gets plenty of the footy but doesn’t hurt you? I’d like to meet the people who continue to perpetuate this absolute myth. Gathering 29 disposals (11 contested), nine tackles, and five clearances, Mitchell was a bull in this game and seemed to feed off the energy that Wingard and Worpel were putting out.

I thought O’Brien comfortably won this ruck battle and was one of the dominant big men on the ground.  Reeves did match O’Brien with raw hit outs, and he was in no way disgraced or towelled up. It was clear that the more experienced ruckman was better, which is really not that surprising. O’Brien did the dirty work with 17 contested possession and five clearances to cap off his night.

A really strong marking display from Himmelberg. He also had some good moments with the ball around him on the deck. The five contested marks definitely stood out. The snap after the half-time siren was ambitious but also very good as well. He made his stats look a bit better with the last goal of the game, but I think he definitely could’ve ripped this game away from the Hawks much earlier in this game. Hopefully the experience will help develop that side of his game.

If you don’t mind umpire?

Really struggled with how Darcy Fogarty wasn’t paid the mark in the second quarter. Clearly had hands on it in the first instance and then got the second grab. I don’t care if the defender got a fingernail on it, Fogarty had the majority of control of the ball and that is paid eight times out of ten (I would have said nine, but there was another instance in this very game).

Points for effort to Schoenberg for complaining about being pinged for a clear throw. Everyone loves potting an umpire for an incorrect decision, but that is one that should be applauded.

I genuinely believe there is not a single Hawthorn supporter that doesn’t get nervous when Sam Frost has the footy in his hand, particularly when he goes to kick it. Gives me chills just thinking about it.

A very good game from Wingard. He did remonstrate with teammates, at times, but I thought he was probably justified. He is now an experienced player who had a good match-up, where he had an advantage. This was being wasted, as teammates dragged their opponents into his area to create more of a contest. Give the guy some space up forward to do his thing!

Ned McHenry lined up for a set shot in the last quarter with David King questioning if he had the leg and if he believed he could make the kick from 45 metres. He was then shown that McHenry knows exactly how far he can kick the footy as the little guy (who is actually taller than me) sunk his foot into it and just cleared the line to kick a crucial goal for the Crows.

I have to mention the effort of Kyle Hartigan. Matched up against one of the better key forwards this season and I thought he performed admirably. He also found time to assist his other defenders and finish with 11 intercepts to equally lead the statistic with Sam Frost and my next honourable mention in Tom Doedee.

Doedee and Hartigan pushed very close to a Mongrel Punt defensive double-double, and both performed as the lynchpin of their relative defences (Once the rest of their defensive teammates turned up).

Of course, there are other players for both teams they deserve a bit of a mention, but the Olympics are on and its after 2am.

The Crows secured the win and have given themselves some breathing space from the bottom three. The run home does not get any easier for the Crows, however, with the Bulldogs Port Adelaide and Melbourne awaiting them in the next three weeks.

While some could look at that as a bit of a doomed run to end the season, I’m sure a lot of Crows supporters are excited to see how their team measures up and if they can snatch an upset from a likely top four team.

Now, as a Cats supporter it gives me absolutely no pleasure…. wait a minute, it does give me pleasure to say that the Hawks are in equal last and holding off the Kangaroos by mere percentage. It’s the little things in life.

But seriously, the Hawks are in a bit of you-know-what-phase, but they definitely have plenty to work with moving forward, and they have shown just last week how they can lift to match their opponents’ level when they put it all together.

Hawks’ fans will likely be circling the Collingwood and Richmond games as chance to collect a couple more wins and also to hurt some of their fiercest rivals. Particularly the Tigers who may be playing for a spot in the September. Wouldn’t that be sweet, Hawks fans?