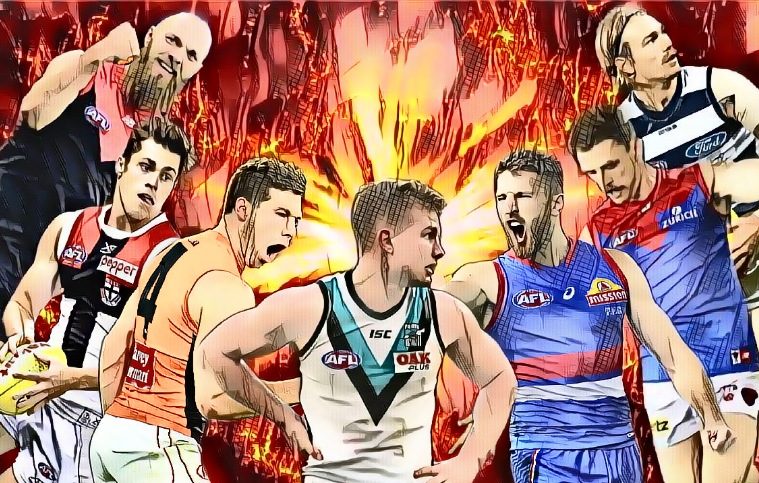 Well, that was fast. Here in South Australia, it was all going so well. Then in two short days, everything has completely fallen apart, and we’re now staring down a seven day lockdown that seemed so improbable this time last week. I finally understand what it’s been like for those of you in the eastern states, and you guys had to go through it far longer than I will be! Nevertheless, let’s not get bogged down in the negatives. Round 18 has come and gone, Adelaide and Port Adelaide have left the City of Churches after a whirlwind few hours, and we’re left with a Round 19 that has been stuck together with used chewing gum. Enough of that, let’s down to the real business at hand.

With two thirds of Geelong’s three-headed monster currently on the sidelines, Chris has once again pulled the trigger on Hawkins Island, and the results speak for themselves. This week’s performance against Fremantle sealed the return of Hawkins to our team, and Alex Pearce was simply destroyed in the one-on-one battle. Kicking four goals from 14 disposals, Hawkins monstered Pearce, and spent time in the ruck that was extremely valuable given Sean Darcy’s dominance. Hawkins has 41 goals in 2021; the tenth consecutive season he has kicked 40 goals or more.

The small forward positions are arguably the toughest to fill, with no player showing enough consistent form to warrant selection. This week it was time for Demon Bayley Fritsch to step up, and he did so very well. Kicking three important goals to take his season tally to 35, Fritsch is on track to double his season-high goal tally, and with Tom McDonald, Ben Brown and Sam Weideman all not troubling the goal umpires as much as they should (although each has their own reasons), Fritsch is vital to Melbourne’s quest for a premiership.

A week after being named in the squad of the Mongrel Rolling All Australian Team, Jack Steele took his season to new heights with another devastating performance, one that almost got the Saints across the line against the finals bound Port Adelaide. Gathering 37 disposals, including 15 contested possessions, eight marks, seven tackles, six score involvements, five inside 50’s and four clearances, Steele was utterly scintillating, and has been all season long.

Normally, I would specify which position each incoming player has taken over, but that would spoil this section. With a few players coming into and out of the side this week, I decided to blow up the team and basically start from scratch, with the 22 players I’ve got at my disposal.

Right out of the gate, the defence is set. Each player is rock solid in their position, and all will retain their exact place.

Next up, we look at our forward line. Full forward is naturally retained by Coleman Medal leader Harry McKay. Now 10 goals in front of his nearest challenger, the odds of McKay being shifted increase by the second. Centre half forward was a little trickier, given both Lance Franklin and new addition Tom Hawkins could conceivably occupy that spot. But remember what I said last week? Because we need to start viewing Buddy as a 199cm small forward, I have slotted Hawkins into the second big man spot. Franklin, therefore, retains his place in the pocket, as does Toby Greene. Despite being stuck in isolation, Greene has still contributed 35 goals from 14 games, and won’t be getting shifted anytime soon, given the drop in form of various other small forwards across the competition. We’ve also brought in Bailey Fritsch, who slots into the half forward flank position, left vacant by a midfielder we’ll get to momentarily. The other flank spot was occupied by Christian Petracca, but to find out about his fate, you’ll have to read on.

Now we come to by far the hardest job, the midfield. First up, the easy part. Max Gawn is the starting ruckman. Underneath him, we had to have Brownlow Medal favourite Marcus Bontempelli. Roving the packs like a little champion is Carlton’s best player, Sam Walsh. Ollie Wines also retains his place in the centre of the ground. Given these three are arguably the best midfielders of 2021, this wasn’t overly difficult. In our group of midfield maestros, we have two out-and-out true wingmen in Paul Seedsman and Hugh McCluggage, which is very handy, as these two take their place on the square.

We’re left with the half forward flank position, which as you may have guessed is retained by Christian Petracca, and our four players on the interchange. Under normal circumstances, different positions would be included, but this season, there has just been so many, almost too many players in the midfield that have been performing at an amazing level. Keep in mind that our incumbents were Clayton Oliver, Jack Macrae, Jarryd Lyons and Touk Miller, plus last week’s starter Darcy Parish and this week’s inclusion Jack Steele.

Six can’t go into four, so two of those players had to drop out. More on that later, but for now, who retained their place in the team? Jack Steele is clearly one of them, and I have also decided to retain Darcy Parish and Clayton Oliver. The other player that has retained his place is Touk Miller, who has been brilliant in Gold Coast’s rebirth. Now, onto those who have unfortunately dropped out.

Both midfielders who dropped out of the line-up this week would undoubtedly feel hard done by, considering their form across the season. Both Jack Macrae and Jarryd Lyons have been superb contributors for their respective clubs, and both are in arguably career best form. Macrae has only dipped under 30 possessions once this season, and is averaging 34 disposals, seven score involvements and six clearances. But it seems that the Bulldogs’ weight of midfielders is overshadowing Macrae, and he often competes with his teammates for the dominant performances. Marcus Bontempelli is the damager, Tom Liberatore is the contested footy winner, and Macrae falls into both categories. But he isn’t his team’s dominant player in either category, and thus his position has been filled by someone else. Harsh? Fair? Harsh but fair? Harsh and unfair? I’m sure you’ll let me know.

Lyons too, has stepped up this season, and has become the Lions’ best midfielder in Lachie Neale’s absence. Averaging 28 disposals, including 14 contested possessions, and six each of score involvements, clearances and tackles, Lyons has also found himself the main target of taggers, even when Neale has been by his side. With this new aspect to tackle, Lyons’ form has just ever so slightly dipped, and every other midfielder is steeping up around him. Lyons has still been very good, verging on great, but with other midfielders around the competition nipping at his heels, it had to be Lyons that fell this week.

The other player to lose his position is Crow Taylor Walker. Despite sitting second on the Coleman Medal race with 42 goals, Walker’s last three weeks haven’t been his best. Granted, this is due to Walker’s date with Daniel Rich’s hip, but nevertheless, Tom Hawkins has elevated his game in those same three weeks, so the decision had to be made to swap the two players around.

So with 18 rounds in the books, here is where we stand:

Before you come for my neck, I am aware that I have once again left Zach Merrett out of the line-up. It is just so difficult for our players in the waiting room, because all of our incumbents have put together such strong seasons that makes it so tight in the race. That is quite clearly the case here, as Merrett is battling with teammate Darcy Parish for a spot, and the race could not be any tighter coming out of Round 18. At the end of the day, with so many midfielders enjoying seasons of excellence, I will eventually have to choose between them. So, I have made an executive decision. This is it. Whichever of Parish and Merrett has a better performance this week against GWS, will be included in next week’s team. You have my word.

Merrett is probably the most obvious name missing from the team, and after naming 18 players on the verge of breaking down the door last week, I thought I’d strip it back and give you some names that are in my “emergencies” list, even though I hate to use that phrase. Some will be double-ups from last week, others are the three players omitted from this week’s team, and I of course will miss a player that you will lynch me for, but please do so kindly.

We’ve made it through 18 rounds, but the AFL really is starting to hang by a thread. COVID has now unfortunately made its way into four major cities, and is threatening to derail the entire season. I’m now stuck inside for at least a week, and possibly longer if things don’t improve. But it’s not all bad. At least I’ve got plenty of Zak Butters highlights to get me through the tough times.

See you next week. I hope.