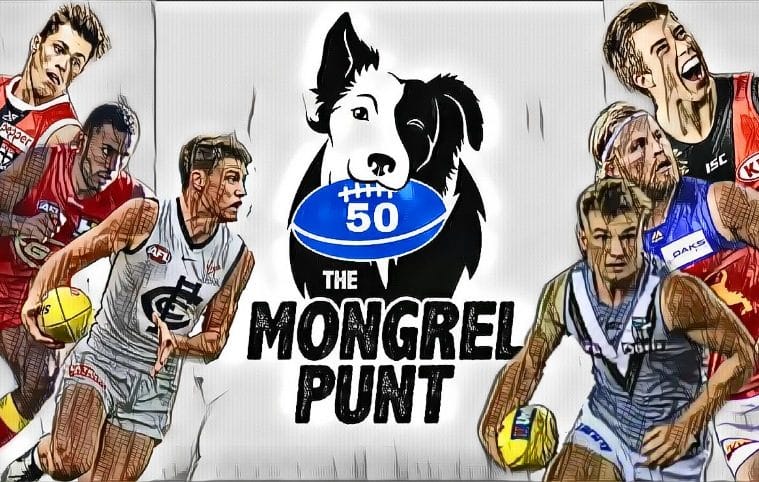 Two weeks is a long time in footy, and that statement can be applied to our Mongrel 50 more often than not.

Another two weeks of form has seen some players rise, some fall and others… well, they have such a strong body of work behind them this season that they’re going anywhere in a rush. Our new number one has had a monster season, and continues to produce massive results for his team. To quote Colin Hay and his Men at Work… who can it be, now?

Look it up, ffs, whippersnappers.

What makes The Mongrel 50 different from every other set of player ratings is that it is fluent in nature, placing a strong emphasis on the last four weeks of footy to capture those in the best form currently.

So, let’s have an example – Taylor Walker.

A blistering start to the season saw Tex occupying top spot. He was a beast, and he had not been outside the top 20 for the entire year. Until now. He has built a base of excellent form to build on and it has withstood a decrease in form, as well as missed games due to injury.

It hasn’t been enough to keep him in the top twenty this fortnight, and with just 12 points scored over the past four weeks, Tex is heavily reliant on his early-season form to save his bacon. The issue is that everyone continues to build their overall scores around him, and with basically all Tex’s scores running at 50%, anyone who has a stellar four-week stretch could leap past him. I expected him to drop into the thirties by the time we published this Mongrel 50 (post R18) but that early-season form is good enough to keep him in the twenties.

Round 16 ranks in parenthesis

THE NEW KID IN TOWN

This is the first stint at the top for Merrett, who has been in stellar form all season, working in tandem with our number-six man, Darcy Parish to put this Essendon midfield back on the map, and aid the Bombers as they quest for a finals berth, and perhaps that elusive September win.

As some of you are aware, I am not really a betting man, and we take an active stance against having betting ads on our site. Thanks for the offers, boys, but we’re happy to take the hit and walk the walk, not just talk the talk. Anyway, even with that rule in place, if you like a bet… so be it – I was tempted to throw fifty on Merrett for the Brownlow.

He is in the top ten for votes over the last five years in what was a pretty ordinary side. I understand that he’ll have Parish pinching votes and vice versa, but Merrett is a proven commodity in terms of catching the umpire’s eye.

Anyway, a well-deserved first place, with a great body of work across the season, and a massive 132 points over the last four weeks to edge him ahead of Bont. Great work, Zach.

IF THIS SYSTEM REWARDS GOOD FORM, WHERE IS JAKE STRINGER?

The funny thing about the Bomber fans – you can give them the number one player, and another in the top six and they’ll still wanna know why another bloke didn’t make the cut.

Stringer has a season total of 181 points, and of those points, 72 have come in the last four weeks. Get your calculators out… that means that 109 of his accrued score is hit with a 50% penalty.

So, 44.5 + 72 = 126.5 points. That puts him in 53rd, just four points behind the 50th man, Jack Riewoldt. If there is a positive here, it is that 38 of those points for Stringer came this week just past, so they will not incur a penalty for the next ranking period either. In reality, he needs a good week in the next two weeks to jump back in.

So, nine of the top 11 are midfielders… damn it, we’re just like every other ranking system!!!

Not quite. I saw someone post a top however-many on Reddit a week or two ago and the top 18 were all mids, so at least we’re throwing a few other positions in along the way.

Overall, our top 20 has four defenders, three rucks and just one forward. That means 12 of the top 20 are mids. I can live with that.

BUT WHY THE LACK OF FORWARDS?

Well, have you noticed the scoring drying right up?

The criteria a forward is assessed on is based largely on offence (aside from tackles inside 50), so the slow down in scoring is really impacting the way the forwards are scoring in this system. Hawkins is in there, but that’s it, but if you go back to the start of the season before the coaches worked out ways to manipulate the “stand” rule, you’ll find that in the first Mongrel 50, Tex Walker was number one, Harry McKay was fifth and Josh Bruce was ninth.

The next period, following Round Six, saw in second, McKay in at seventh and Toby Greene at eighth, so it can definitely be done, but the style of the game has reverted to the one that sees forwards struggle.

As my four-year-old daughter would say… not my fault.

This time round, the top of the ladder Dees have six representatives, whilst the Dogs have five. 11 of the top 50, which, if my third-grade mathematics are corrects, ends up with 22% of the top fifty coming from the top two teams.

Trav Boak is at 75, which is his lowest rank of the season, amazingly. He was at 58

Harris Andrews is at 63 after appearing as though he was making a run. He was at 54

Patrick Dangerfield is at 87 now, and climbing. He was at 121

Tim Kelly continues to fall, down to 95 from 83. He was eighth after Round 10

Charlie Dixon fell slightly, at 82 from 65

Jeremy McGovern had a slight rise, and really, at 170 from 200 last time, it is nothing to write home about

Patrick Cripps continues to disappoint, down to 140 from 128

And, Dusty, with his season cooked, is at 88, but will end up in the three digits.

I get asked this a bit. How would it look if you removed the weighting to benefit players performing in the last week? Well, once you start providing it, you can’t stop, right? So, here’s the top ten if we removed the 50% reduction on anything outside the last four weeks.

New Mongrel 50 will be out after R20, and for our Inner Circle Members, the Weekly Player Ratings that feed our Mongrel 50 are listed below for you to peruse.