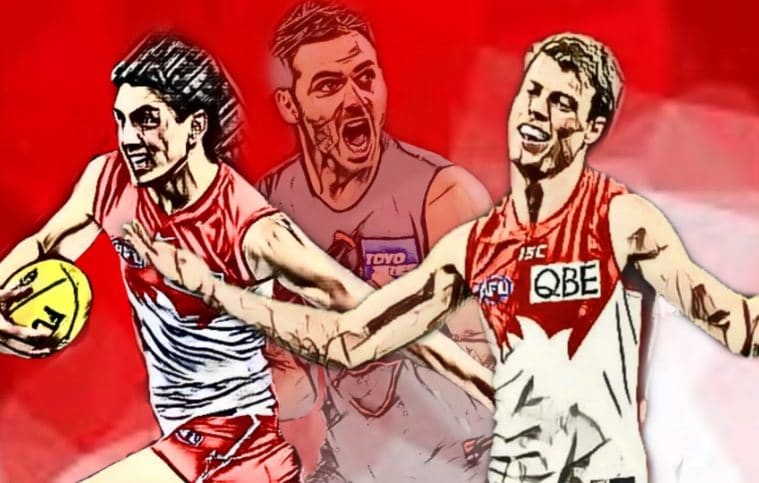 The last match of a somewhat eventful round of football saw GWS and Sydney do battle at Giants Stadium, Ballarat, their traditional venue – Metricon Stadium on the Gold Coast, with stars like Toby Greene, Callum Mills, Zach Sproule doing battle. It was a match that fans of both teams had been eagerly awaiting, and not just because the original starting time of early Saturday afternoon had been moved to Sunday twilight. No, this match was eagerly awaited because of the implications for both winner and loser. A win would continue to solidify Sydney’s credentials as a finals threat, while a loss would extend the gap between them and the top sides at the same time as bringing them back towards the pack of teams in the middle section of the ladder. For the Giants, a win would see them back in the eight while a loss would continue to consign a team that should be vying for a top six position to the also-rans of 2021.

Their match-up earlier in the season – the Giants won a thriller by two points – suggested that this would be a match that would go the distance. By the time that Jesse Hogan kicked his second goal deep into the second quarter, putting the Giants up by 34 points nigh on half time, any betting man would have agreed that this iteration of the Sydney Derby had run its race. If you know any of these people, I suggest taking them up on any bet they choose. A sport like AFL can be almost impossible for any betting man/woman to try and impose their will upon. The second you think you have figured this game out; it has a funny way of surprising you. As the second half of this match proved, the Swans are one team that any intelligent person would not bet against. The Swans would kick the next nine goals of the game, and ultimately run out 26-point winners, and in the process almost guarantee a spot in September.

For almost 18 months, football has had to deal with a crisis it had never seen before. By the end of round one 2020, we football fans recognised that the plight of the AFL was no longer the most important thing in life. We needed to shut down the league in order to stop the movement of people across borders that we had for so long taken as our birthright to cross. By the time football resumed, its heartland, Victoria, would be rendered obsolete as the effects of a six month COVID lockdown brought the football-mad state to a standstill. The grand final, having been locked up as an MCG event until 2057 following a rigorous vetting process (by this I of course mean what could charitably be described as a bribe by the MCC and Victorian State Government), was relocated to Brisbane, a sign of how dire the predicament of coordinating a season had become.

I don’t reckon that I was the only football fan that believed the pandemic was beyond us heading into 2021. By January of this year the federal government were telling us that they would have all willing and able Australians vaccinated (at least with their first jabs) by March. Of course, by March, this timetable got blown out to May, and by May, this became October. Now our vaccination timetable has become an indeterminate time in late 2021, or maybe 2022, but of course the roll-out is on target. Whoever cared about public health, right?

Certainly not our federal government who decided not to deal directly with the chief manufacturers of the COVID vaccine (Pfizer) in mid-2020, instead allowing junior bureaucrats to try and secure the future health of the country. Don’t believe me? How many phone calls do you think Scott Morrison (presumably known by his nom-de-plume- ‘ScoMo’ because he cannot remember anything beyond five letters) made to the OECD to secure his friend Matthias Corman a job? 57. How many did he make to secure the 50 million additional doses of the Pfizer vaccine that were on the table in the middle of last year? 0. That’s not a misprint of an ‘o’, by the way, that’s a big, fat zero.

The federal government, like the state NSW liberal government, are led by economic rationalists. This is fine, except for when it comes to people’s lives. An economic rationalist believes that every life has a finite value, and if growth of the economy outstrips this value, the life should be sacrificed. This is a rational argument in theory, but in practice you quickly understand that they are not talking about numbers and figures, but rather, human beings. Four people so far have perished in New South Wales’ quasi-lockdown. Each of these people had family and friends, all of whom will be affected dramatically by their loss. The movement of people from NSW to Victoria has forced them into their fifth lockdown, while states throughout Australia have rightfully shut borders to stop the spread of the virus.

I know I am supposed to be talking about the football, but when our country is being led so ineptly I must admit that I find it tough. This was a match that I was really looking forward to, but because of the laziness of our federal government, I didn’t get to watch Toby Greene at his best. Nor indeed did I get to watch Callum Mills continue to become one of the best mid’s in the comp, or Harry Cunningham shut down one of the Giants best forwards. The tears shed by John Longmire on the ground after the game, as he recognised the enormous obstacles overcome by his group of players to win, was a moment that will live long in my memory, but the truth of it is that it shouldn’t have been necessary. Don’t get me wrong, I still enjoyed what I watched, and the Swans more than deserved their victory, but the game definitely missed something.

The season now appears to be sitting on a knife’s edge and we will probably face more situations like tonight’s over the next few weeks.

Alright, enough with the negativity, let’s focus on the positives. Being able to watch Buddy play now is kind of like being able to watch The Beatles perform Get Back live in 1969. They were beyond their peak, had broken from the structure that had originally made them great, but showed unequivocally that when they wanted to be, they were still the best.

I must admit, every time I get to watch Buddy play now, I have to pinch myself. Without a doubt, he is the last player that any of us will see kick 1000 goals (his current tally sits at 981) and the way that he can weave inside and around opponents before putting the ball on his left boot, and then see his kick slide the opposite way that one would expect, is nothing short of magical.

In tonight’s game, Buddy was matched up by one of the best young defenders the game has to offer – Sam Taylor – but he still took him to the cleaners. Even though he has played more than 300 games, and even though every defender he plays against should have seen the best he has, Buddy always seems to produce something they could never have expected. He’d finish the game with 11 disposals, six marks and four goals, proving (as if it needed to be proven) that he is still the best forward in the game. As it stands, he sits seventh in the running for the Coleman Medal, 15 goals off the pace. While it’s highly unlikely that he will make up the ground between himself and the current leader, Harry McKay, if anyone could do it, it’d be Buddy.

With the number of attacks that GWS and Sydney create out of their backlines, the lethality of Dawson and Cumming’s respective boots promised to be important. Though both would have two score involvements each, I don’t think it would be ridiculous to say that Dawson had more impact. He would finish with 21 disposals, four marks and seven tackles, compared to Cumming’s 19 disposals, one mark and three tackles.

However, if we were to line up both team’s respective half-back lines, and rank them by importance, I reckon we would comfortably settle upon Nick Blakey as the most impactful. At times over the last two seasons, Blakey has looked lost, struggling to impose himself on any position and nail down a spot in the side. However, since being recalled to the team a few weeks ago, Blakey’s form seems to have turned 180 degrees. Using him out of the back half has allowed him to channel his speed and attack on the ball in a way that being forward of the play seemed to stymie him. He would contribute 18 disposals, six marks and five score involvements today, featuring in the votes as one of the more damaging players on the field.

By quarter time of today’s game, I thought that the Giants had done an extremely good job to almost distract the Swans ruckman, Tom Hickey. Even by the most stringent of judges, Hickey’s efforts in season 2021 would see him in the best three or four ruckmen in the competition, an enormous improvement on previous seasons when he was consistently described as one of the worst things a ruckman can be – a journeyman. Once you have been hit with this label, it can be very hard to shake it off. It’s the ruck equivalent of a midfielder who’s slow or doesn’t hurt you with the ball, regardless of its relationship to reality.

If this were an American sport, I reckon we’d have commentators the country over calling this season Hickey’s ‘revenge tour’. He has left many doubters with egg on their face as he has embarked on a career-best season, with a spot in the All-Australian 40-man squad almost assured (a selection in the team is probably a step too far). Journeyman rucks at their fourth club (in their fourth state too) shouldn’t be doing this, and it’s a testament to Hickey’s character and work ethic that he is.

Despite all of this, at the end of the first quarter, and with the Giants holding a 29-point lead, I thought that Hickey’s time in the sun was over. The Giants looked like they were attacking Hickey physically, jumping into him at any opportunity and despite the absence of Mumford, I thought Flynn was beginning to work Hickey over.

But Hickey, like any good player, proved that it takes more than one good quarter to beat him. He would finish with 17 disposals, 36 hit outs and a goal, showing that, at least for 2021, he is one of the best ruckman in the game.

That’s about all I have for today. The Swans victory all but assures them of a spot in the finals, while the Giants loss makes their claim for September action that little bit more difficult.

With what has occurred this round, I think it’s only appropriate to say that both teams will play different opponents at some point in the future.