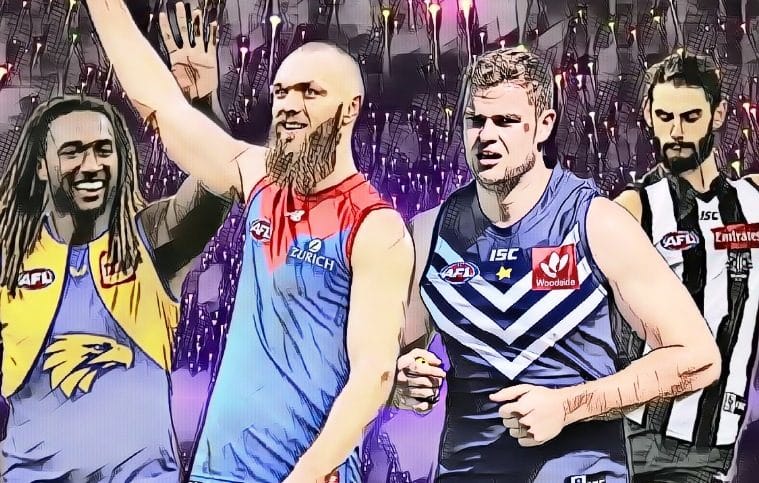 What The Ruck?!?! Ruckman Rankings after Round 16

Welcome back to the ninth edition of the ruck rankings as we take another look at how your club’s behemoths fared over the last fortnight. Things are getting seriously heated at the top, while some forgotten, yet familiar, names make a late charge. Let’s get stuck into it.

RUCKMAN OF THE FORTNIGHT

You can put the term ‘breakout’ to bed, as this man is arguably in All-Australian form and nothing but injuries can stand in his way. Sean Darcy gets the nod for the top gong as he closes the gap between third and fourth on the leader board. In the previous article, I touched on Darcy’s upcoming challenge against premier ruckman Brodie Grundy, and the two locked horns in an even battle across the board. While Grundy trumped Darcy in hitouts (27-19) and disposals (22-18), Darcy was a brute force in the middle, regularly sending the ball towards Freo’s scoring end. He was all over Grundy in the clearances, finishing with a game-high nine clearances (vs Grundy’s two) and had four inside 50s, five score involvements, and 12 contested possessions.

He was arguably Freo’s best against the Blues, as well, dominating their duo of de Koning and Casboult, amassing 40 hitouts (22 to advantage), 20 disposals (13 contested, an equal game-high), a goal, and an equal game-high nine score involvements, eight marks (three contested) and six clearances. Simply outstanding.

Showing no signs of his neck injury and sporting a slick new haircut, Brodie Grundy returned in fine fashion, and supporters in his camp have the right to claim that he won the battle against up-and-comer Sean Darcy. With 27 hitouts and 22 disposals, he was also able to impact offensively with two goals and seven score involvements, to go with seven marks (three contested) and seven pressure acts. While less dominant against the Saints and surprisingly benched in the dying moments of Collingwood’s late resurgence, he kept the statisticians busy, collecting 33 hitouts (15 to advantage), 19 disposals (10 contested), five tackles, four intercept possessions, and 18 pressure acts.

Nic Naitanui is a shining light in a spluttering Eagles outfit. He was his usual dominant self against Tim English, gathering 39 hitouts (11 to advantage), 20 disposals (16 contested), eight clearances, five inside 50s and five score involvements. He was subdued by former teammate Tom Hickey in the following round but managed to finish with 25 hitouts (12 to advantage), 15 disposals, five tackles (including a game-high three tackles inside 50). Nathan Vardy was impactful with 13 hitouts (seven to advantage) from 26 ruck contests.

Finding himself in the votes for another week is veteran Todd Goldstein who is basking in some amazing form, currently. He made light work of Zac Smith, racking up 44 hitouts (13 to advantage), 21 disposals (12 contested), an equal game-high nine score involvements, and six clearances. Against the unlikely duo of Tim English and Lewis Young, Goldy also performed strongly, kicking two goals to go with 30 hitouts (11 to advantage), 14 disposals, seven marks (three contested), and six score involvements. Tristan Xerri has displaced Tom Campbell as North’s backup ruckman and key forward of late, averaging 10 hitouts and 8.5 disposals in the last two weeks.

The man who claims the final vote is a first-time vote-getter, and that is big Scott Lycett. He has accumulated some yearly high hitouts numbers in recent weeks, with 38 against the Swans, and topped this with 39 against the Hawks. Lycett was the unlikely match-winner against the Swans, coolly slotting a goal off one step to seal the game for the Power, while also collecting 14 disposals (six contested), five tackles, and five intercept possessions. 15 of his hitouts were advantageous against the Hawks, and made his presence felt with 23 pressure acts and eight tackles to go with eight disposals.

So, the leader board now sits at:

Well, how about that? Gawn could’ve made a case to poll a vote or two this week, but nonetheless, the two kings are tied at the top of the table, which sets up an enthralling battle to see who takes out the ruckman of the year.

Like I’ve said, a little stiff not to poll this week. He put together a standard Gawn performance against young Sam Draper, finishing with 32 hitouts (10 to advantage), 16 disposals (13 contested), four marks (two contested) and four score involvements. In this game, Luke Jackson attended 13 ruck contests (Gawn 57) and had seven hitouts (six to advantage). Interestingly, their ruck split was the most even it had been for the entire season, with Gawn attending a year low 36 contests, and Jackson attending a year high 35 contests. Gawn was often utilised as a deep target but to no avail, finishing with five score involvements and no goals. The Demons have brought in Ben Brown to fix this scoring issue, so expect the Gawn/Jackson split to shift into Gawn’s favour once more. Gawn was still influential in this game, gathering 17 hitouts (seven to advantage), 18 disposals, nine marks (two contested), and five clearances, including an equal game high three centre clearances. Jackson himself had 12 hitouts but just two to advantage.

ROB has regained his consistency, last seen in 2020, with some solid performances in recent weeks. Against the Blues, he had the best of de Koning, finishing with 27 hitouts (10 to advantage), 13 disposals, five intercept possessions, six score involvements, five clearances, and five tackles. He was equally impactful against the Lions, collecting 36 hitouts (eight to advantage), 16 disposals (13 contested), two marks (both contested), and five clearances.

Rowan Marshall returned to help Paddy Ryder in the ruck and Ben King in the forward line, providing another dominant target forward of centre and chopping out in the ruck, to help the Saints cruise to two wins on the trot, one against the reigning premiers. With an almost 50-50 ruck split across the two games, they exposed the inexperienced Tigers ruck department of Chol and Coleman Jones, combining for 40 hitouts (16 to advantage) and 23 disposals. They were able to limit Grundy’s influence in the following fixture, with Ryder kicking two goals to go with 23 hitouts (seven to advantage), while Marshall clunked a game high three contested marks from seven marks, and had six score involvements, a goal himself, 15 hitouts and 14 touches.

Also unlucky not to poll is the Big O, who was supreme against the Cats and had one of the best performances of his career. Oscar did it all against the Cats trio of Blicavs, Ratugolea and Hawkins, racking up 35 hitouts (seven to advantage), 18 disposals (11 contested), four tackles, six marks (two contested), and had a game high nine clearances. He had an even duel against ROB the week later, finishing with the same number of disposals (16), had less hitouts (30, 12 to advantage), but more clearances (eight), along with three marks (one contested) and four inside 50s.

Perhaps the complete antithesis of Lycett’s match-winning antics, Hickey was wasteful on the scoreboard in the Swans clash with the Power, finishing with three behinds. He was, however, his usual self elsewhere, collecting 21 hitouts, 14 disposals (seven contested), five score involvements, and four clearances, assisted by Amartey’s 11 hitouts and five tackles. In an upset no one saw coming, Hickey was a pivotal driver in the Swans’ demolition of the Eagles, finishing with 22 disposals (13 contested), six clearances, four marks (one contested), and winning the territory battle with 212 metres gained to NicNat’s 10, despite losing the hitout battle 21 to 25.

The Hawk’s behemoths have played together consecutively for four games in a row, with mixed success in the win/loss department although arguably successful in the middle. One thing for sure is that they are in some fine marking form, providing some much-needed height forward of centre, combining for 24 marks (nine contested) in the last two games. They had the better of young GWS duo Matt Flynn and Kieran Briggs in round 15, with Ceglar doing most of the ruck work, gathering 29 hitouts (eight to advantage), 15 disposals (10 contested), five clearances, and six score involvements, while McEvoy impacted the scoreboard with one goal, eight score involvements, an equal game high two goal assists, 9 hitouts, and 19 disposals. The ruck split was more even in the Burgoyne’s 400th game, with Ceglar continuing his fine form, finishing with 17 hitouts, 19 disposals, four tackles, and five intercept possessions, while McEvoy had another equal game high two goal assists, eight tackles (including an equal game high two tackles inside 50), 20 pressure acts, and 13 hitouts.

As previously stated, Flynn and Briggs struggled against the more experienced Ceglar and McEvoy, combining for just the 24 hitouts (nine to advantage), but worked hard around the ground to collect 14 disposals a piece, with Flynn clunking a game high four contested marks from six marks and Briggs kicking a goal. Veteran Shane Mumford returned to provide a much-needed bigger body against premier ruckman Max Gawn and was his usual bustling self, finishing with 26 hitouts (nine to advantage), 10 disposals, five tackles, four clearances and four rebound 50s, while Flynn took the backseat and had just the six hitouts.

Coming up against the premier ruckman of the competition is no easy task, and young Draper found out the hard way as he was easily restricted by Gawn, who limited Draper to just 10 hitouts. Astonishingly, Peter Wright, who attended 28 less ruck contests than Draper, managed 11 hitouts and the same number to advantage as Draper. But the young bull was back against the Cats, recording 34 hitouts (12 to advantage) and seven touches, while Wright had eight himself.

For the first time in 2021, we saw TDK take over the main ruck mantle at the Blues as Pittonet is sidelined with an ankle injury. He proved he was more than handy in this period, coming up against the established O’Brien and Darcy in consecutive weeks, averaging 23.5 hitouts (5.5 to advantage), six touches, and four tackles. He also kicked a goal against Freo and was supported by Levi Casboult, who attended 31 ruck contests and recorded nine hitouts.

The Tigers desperately need main man Toby Nankervis back as their makeshift ruck duo are slowly spluttering, perhaps coinciding with Richmond’s on field woes. They clearly struggled against the dominant Ryder and Marshall, combining for 20 hitouts (eight to advantage), 23 disposals and seven marks, with CCJ having an equal game-high six score involvements. Chol did most of the ruck work against the Swans with CCJ subbed out at half time with a calf injury, cumulating a modest 25 hitouts, 14 disposals, and five marks (three contested)

The triple threat of Blicavs, Stanley, and Ratugolea were serviceable against Oscar McInerney, with the main man Blicavs recording 24 hitouts (nine to advantage), 15 disposals (11 contested) and seven clearances. Ratugolea also had an equal game-high three centre clearances and four inside 50s, while Hawkins had six hitouts from 14 ruck contests. However, this combination failed the Cats, and consequently, Stanley was brought back into the fold at the expense of Ratugolea against the Bombers, and it paid dividends for the Cats, with Stanley and Blicavs combining for 39 hitouts (eight to advantage) and 19 disposals. Blicavs continued to work hard around the ground despite being the second ruckman, collecting six tackles, 20 pressure acts, and three marks (one contested).

Smith was reasonably beaten by Goldstein, who limited him to just 14 hitouts, but worked hard around the ground to finish with 13 disposals (nine contested), four clearances, four tackles, three marks, and a goal. Ruled out with concussion the following round, Chris Burgess returned to the line-up and did a terrific job against the spluttering Tigers ruckman, racking up 24 hitouts, 12 disposals (nine contested), seven score involvements, commanded the airways with five marks (two contested), and had five clearances, in a performance that finally elevates Gold Coast off the bottom of the rankings. Hats off to you, Burgess!

A very quiet fortnight for the Dogs’ colossus, coming up against the inform NicNat and Goldstein. In this period, English averaged 20 hitouts (nine to advantage), 11 disposals and 5.5 marks, including three contested marks and four tackles against the Eagles. Defender Lewis Young lent a hand against the Eagles and was surprisingly strong, with seven hitouts (four to advantage) from 16 ruck contests.