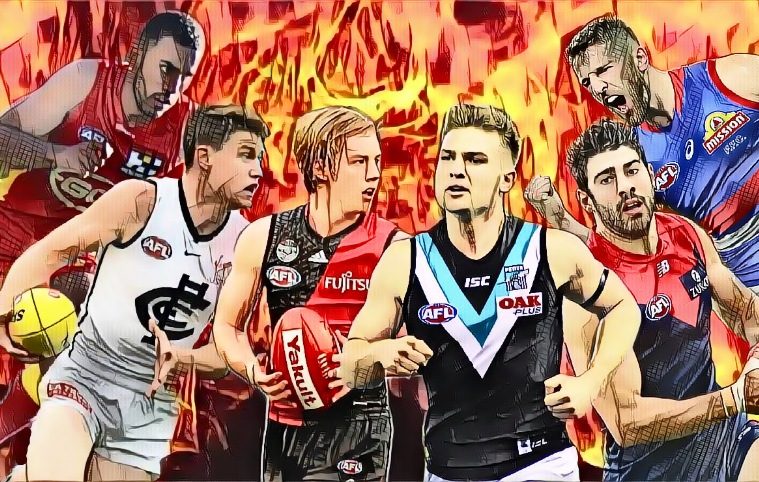 COVID can try, but it will never kill the AFL. Even with Steve Hocking leaving his post as Head of Football (much to every football fan’s delight), Gill and his team just keep on keeping on, and somehow, through all the twists and turns, we’ve made it to Round 17 unscathed. So who are the best 22 up to this point in the 2021 season? Let’s find out.

From being a fringe player his whole career, Paul Seedsman has finally realised the potential Collingwood saw in him when he was 18 years old. This is the first season in which Seedsman has played every game, and he is currently rated the best wingman in the competition by the good people at the Mongrel Punt. Seedsman is averaging career highs across the board (kicks, handballs, marks, inside 50’s, defensive rebounds and metres gained), and at 29 years old, still has plenty of excellent football left in him.

Well, that didn’t take long did it! After being the unluckiest player omitted from last week’s team, Touk Miller clearly read my piece and took it to heart. Miller was undoubtedly best on ground in Gold Coast’s miracle victory over the freefalling Tigers, and has been described by many as the heart and soul of the Suns. Collecting 36 disposals (15 contested), nine clearances, seven tackles, seven marks, six score involvements, and five inside 50’s, Miller is the Suns best, and almost their most important player, and should become their next captain when Swallow and Witts are ready to hand the baton over.

It was a tough week for positional changes, as I needed to make room for Seedsman, whilst moving the magnets to make the other players fit. In order for McCluggage to retain his place, as he doesn’t deserve to be omitted (yet), I had to move him to half forward. This also meant moving Toby Greene from half forward to the forward pocket. Finally, one of the forward pocket players had to be omitted, but more on that later.

The other changes to position is the merry go round of midfielders. It seems that every week, anther midfielder elevates himself above his peers, and this week was recently re-signed Bomber Darcy Parish. Even though Essendon lost by nearly seven goals, Parish was clearly best on ground, and his re-signing is vital to the Bombers resurgence. In order for Parish to move back onto the field, one of our incumbents had to make way, and that player is Demon Clayton Oliver, who has just ever so slightly slipped, just as his team has done the same.

Cam Guthrie picked the wrong game to put in a mediocre performance. Opposed to Parish and Zach Merrett, Guthrie had his worst game of the season, and despite collecting 16 disposals, was nowhere to be found. Now, the Cats won by 41 points, and other players stepped up in Guthrie’s “absence”, but Touk Miller played out of his skin, and someone needed to make way. Guthrie is still one of Geelong’s best midfielders, and no doubt he will be back to his best in no time, but hopefully it’s not too late.

The other player to lose his place is Bomber Anthony McDonald-Tipungwuti. Perhaps the most maligned player in our team, Tippa is staying above the two goal per game average that is you realistically expect from a small forward, but his impact on games is like Essendon’s season. Brilliant one week, ordinary the next. Yes, Tippa has kicked 31 goals in 15 games, but he really needs to do more than just kick two goals a game.

Here’s how we look with all that information plugged into the system:

There’s five players I’d like to highlight this week. Let’s start in the engine room. Max Gawn has been the dominant ruckman all year, and every challenger to his throne has had their ups and downs. There really is only one man that could usurp the Demons’ skipper and that’s Docker Sean Darcy. In his fifth season, Darcy is enjoying a career best season, and is competing with Tim English for the title of best young ruckman in the AFL. The very fact that Darcy’s dominant performance against the Blues is only in the conversation for the title of Darcy’s best game of the season is testament to the rise of Aaron Sandilands’ successor, and shows how Fremantle got it right in the drafting of their biggest asset.

In the middle, there are two players in particular that have been killing it on a regular basis. Hawthorn’s Tom Mitchell, for all his perceived faults, is back to his very best. The competition’s second best player for total disposals, Mitchell is once again tearing the midfield apart, and once again being criticised for the way he impacts matches. I have always argued in Mitchell’s favour, and the suggestion that Mitchell isn’t damaging is nonsense. Mitchell was recruited to be the extractor, and his job has always been to get the ball out of stoppages and into the arms of those who are more capable of doing the damage.

Then there’s Saint Jack Steele. Like Mitchell, Steele is a beast around stoppages, but unlike Mitchell, Steele is a tackling machine. Steele doesn’t get the ball as often as his Hawthorn counterpart, but what he does do is stop his opponents from moving the ball up the ground. Steele is second only to Hugh Greenwood for tackles, and Steele’s disposal average of 28 is clearly a career high.

Finally, let’s talk about two Zacks that have been brilliant for differing reasons; Lion Zac Bailey, Bomber Zach Merrett. Merrett has teamed with Darcy Parish to form a devastating midfield partnership, combining to touch the ball a staggering 958 times. When Dylan Shiel returns to Essendon’s line-up, Ben Rutten will have a very tough job on his hands to try and fit everyone into the middle, and with Merrett and Parish both taking their careers to new heights, it might be wise to move Shiel into the back half, just like the Bombers did with captain Dyson Heppell.

Now let’s talk about Zac Bailey. This season, Bailey has exploded, and has turned into a vital cog in Brisbane’s premiership tilt. Kicking 21 goals from his 15 games, Bailey is also averaging 19 disposals as a midfielder/half forward, and from the outside looking in, looms as the perfect long term replacement for teammate Dayne Zorko. I will go on record in saying that Zac Bailey is the second best Zac/Zach/Zack/Zak in the AFL, and I will only give you one guess as to who the best one is.

Before you jump down my throat with a player that I haven’t mentioned, I get it. Every team has someone that is having an excellent season, and no one is questioning their place in the game. But I can only fit 22 players into this team, and it is a completely subjective exercise.

Given the two changes made this week, only one player is left that is vulnerable. After a scintillating start to the season, Lion Hugh McCluggage has plateaued, and is struggling to have the same impact he once did. That being said, McCluggage also doesn’t deserve to be dropped. Not yet anyway. But it won’t take many more weeks. McCluggage is lucky that the magnets were able to be moved around, but if he can’t manage to earn his way back onto the wing, and a small forward has a big impact in the next few rounds, McCluggage’s early season brilliance will all be in vain.

To conclude this week, I thought I’d share some stats from these teams. Only one player has maintained their place in the team in every instalment of the team, and that’s Sam Walsh. This team has also only been the same from week to week just once, and the week later, six changes were made. Every team has had at least one player over the course of the year, although North Melbourne’s only inclusion was Jaidyn Stephenson in Round 1.

That’s all for now, see you next week.