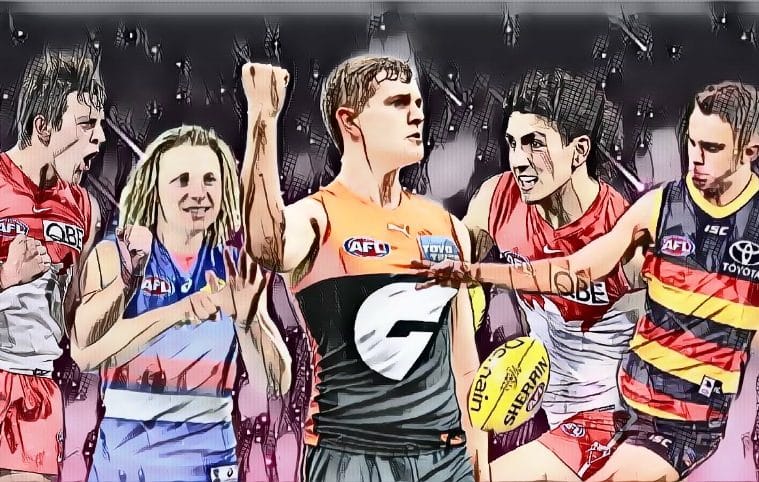 This article called it back in Round Nine when Justin McInerney received the five votes that it wouldn’t be long before he became just the 16th player to receive two nominations since 1993. A curiosity, five of those players have received their second nomination this year, which may be a result the shortened season in 2020 with five less rounds than normal that may have in ordinary times seen Sholl (8 games before 2021), Green (6), Jackson (6), Georgiades (7) and McInerney (10 across 2020 and 2019) ineligible.

This was probably the most fiercely contested week of the season with the five vote-getters for Round 16 all with legitimate claims for the maximum, Melbourne’s Trent Rivers in particular also desperately unlucky to miss out for a superb game on Saturday against the Giants. While these eye-catching performances are captured below, a few other outstanding statistical returns that should be acknowledged include the rising key forward duo of Jacob Koschitzke and Riley Thilthorpe ruling the airways with five and four contested marks respectively, and Harry Shoenberg’s stunning five tackles inside his forward fifty.

The third round of golf tournaments is called ‘moving day’ and three-quarters of the way through the AFL season we saw the most likely Mongrel Rising Stars ‘moving’ up the leader board. Green has put some distance between himself and the chasing pack with his fourth 5-vote game (no other players has more than 1 to date),  Sholl polled his first votes since round 7 and has moved into outright fourth, while McInerney jumped into the top 5 on the back of his rich vein of form.

Leon Cameron’s coaching at times can be described as head-scratching and no decision further illustrates that than his decision to send midfield bull Tom Green back to the reserves last weekend. A belligerent 41-disposal game saw him instantly recalled and he starred against the mighty Melbourne midfield outperforming high profile opponents Oliver and Petracca on the way to collecting four coaches votes in the stunning upset.

25 disposals (3rd most for his side), six marks, four inside 50s and three clearances was the near-perfect response to the strange at best decision not to include him in the Giants best 22 against the Hawks.

Bursting on to the scene last year with a goal for the ages Weightman took some time to establish himself in the front-running Dogs side in 2021, but he has well and truly entrenched himself in Beveridge’s best team and is eyeing off September. A small forward who is equally strong in the air and on the ground are worth their weight in gold, and so Weightman has proven once again slotting four goals against a hapless North defence and was rewarded with five votes from an impressed coaching panel.

His goals were certainly the headline, but ten score involvements from just 13 disposals, seven marks, five inside forward fifty and two direct goal assists were the prose that kept viewers spellbound from start to finish.

The rebounding Swans defender has hit a rich vein of form that has seen him sky-rocket into the Mongrel Rising Star top 5 and was recognised with an official AFL nomination for round 16. His assured attack on the contest was too much for a flailing West Coast side and he helped himself to 22 disposals at a remarkable 87% efficiency that resulted in two coaches votes in a stunning performance by the reinvigorated Sydney side.

The busy Crow was back to his best after a few quiet games and weeks outside the selected twenty-two with 28 disposals (the second most in his career to date) working tirelessly to suppress a rampant Brisbane outfit. Ultimately unsuccessful in that pursuit, Sholl was nonetheless impressive gaining 465m on 11 intercepts, two clearances and a goal assist as he looks to end the season in the same form in which he started polling votes in four of the first seven weeks.

The clever Sydney half-forward made his mark early in the season, prominent in each of the Swans four successive wins but tailed off and was left to heal up after injury from Rounds 9-14. However, once he was again ready to contribute again, and after a quiet start in the thriller against Port, he returned to a starring role in the demolition of the Eagles. Nineteen disposals, five marks, six inside 50s, two goals and a boundless energy drove his team to their largest victory over their fierce rivals since the Eagles first season in 1987.

Ryan Byrnes, has been an extremely strong contributor in the past fortnight for his Saints, his 21 disposals and four clearances providing great support to Steele and Dunstan through the middle of the ground.

Trent Rivers, again desperately unlucky to be overlooked for a spot in the votes, however, will console himself with yet another sterling performance in Melbourne’s stingy defence. 22 touches at the elite 82% disposal efficiency, seven intercepts, six rebounds and four tackles had him as one of his sides very best in the shock loss to the Giants.

Miles Bergman, the young Port player is slowly moving across the field, impressing against Geelong in defence, claiming Mongrel votes against the Suns running through the midfield, and standing out as a deep forward against the Hawks which resulted in two crucial early goals from his 13 possessions.