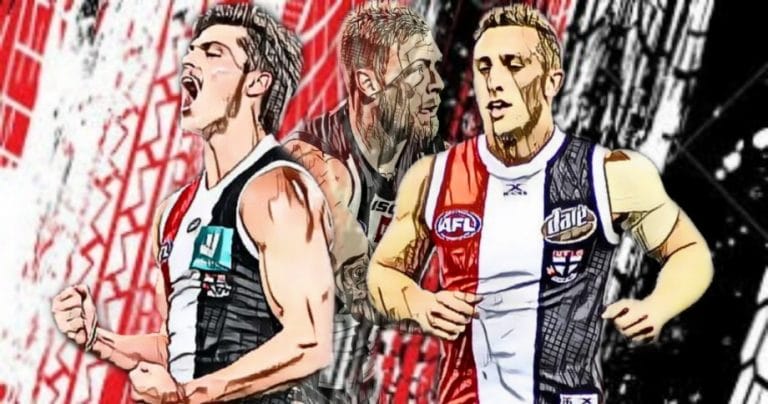 On a grey, dreary, cold Melbourne day, what better way to warm the soul than with a huge Sunday arvo blockbuster? Well, I wouldn’t know, because on paper this game screamed ‘do something else with your day’. I may be being a little harsh.

In truth, this game was intriguing in terms of its possibilities, if not its impact on the final makeup of the top eight. Were St Kilda that good last week, or have Richmond really just fallen off the cliff? Were Collingwood thinking that sacking Buckley would really turn things around, or is it just as much a personnel issue? Given their side was the fourth oldest of the weekend, that question may answer itself. Who was going to kick the goals? How would Brodie Grundy compete against the exceptional tandem of Paddy Ryder and Rowan Marshall? Would Max King remember which sticks to kick the ball through? Can I pump up St Kilda a little bit, as my long-suffering brother-in-law has requested? The answer to the last question is probably not, but the rest remains to be seen.

These clubs, who faced off in some classic games around the turn of the last decade, may not be at their respective peaks. In fact, that may be an understatement. I tend to write these introductions before the first bounce on account of time, but after the game finished I really don’t think I was scathing enough in these assessments. In any event, in a decidedly average game with a solid if unspectacular finish, here’s what happened:

I feel like I use basically the same pun every time I write about the Saints but frankly it’s just too obvious not to use. Jack Steele is the heart and soul of his football side. For a player they got for a price far too low for a player of his quality from the Giants, Steele has become one of the stars of the competition over the last few seasons. Today he was typically bullocking. His efforts early in the first quarter, including two crunching tackles inside his side’s forward half inside the first ten minutes, really set the tone for his side in a win that put them, somehow, just half a game outside the top eight.

Steele’s efforts without ball in hand are perhaps his most notable, and most valuable to his side. In the first half, when the game was really on the line and Collingwood seemed to actually be trying, the Saints’ skipper laid 11 tackles. He finished the game with 14, in addition to a game high 36 touches. In a game that featured a number of genuine midfield stars, Steele shone brightest, with 14 contested touches, six inside 50s, eight clearances and seven score involvements. It’s not inaccurate to suggest the Saints would be rooted without their skipper, and they most likely would have lost without the best player on the ground leading from the front.

It was, perhaps, the score involvements from Steele that were most impressive. His hands out of the pack to set the ball into space for Membrey for the game’s opener contrasted heavily with the rest of the first quarter, when the Saints managed to lock the ball inside forward 50 for little reward. After just one mark inside forward 50 in the first half, Steele put that hoodoo to bed, too, by hitting up Max King close to goal. Ratten’s side may well lack polish, although Brad Hill, as will be discussed later, was very solid in this one, but they could not be accused of lacking grit.

I swear to god these puns just get worse and worse. Anyway, Steele’s game may have been all for naught without the more than capable support he got from Crouch and Dunstan in midfield. Dunstan was the only player on the field to register more clearances than his skipper, with ten, to go with 27 touches and 13 contested. For a player who hasn’t been a first choice mid at times this year, Dunstan’s ability and desire to crack in has made the Saints a better side.

On the other hand, Brad Crouch is a known quantity. St Kilda knew what they were getting when they traded for the former Crow, and again, while grit may not necessarily be a requirement for the Saints, it’s certainly not a quality likely to go out of fashion anytime soon. His 28 touches included five clearances and six score involvements, and his efforts went a long way to earning his side the win.

SHOULD HE STAY (FORWARD) OR SHOULD HE DE GOEY (INTO THE MIDDLE)?

There are a number of players in the league whose best position remains known, presumably, to just the most senior of the football Gods. Players like Mark Blicavs, Isaac Heeney, and potentially even Nat Fyfe have the capacity to shift themselves around the ground and still impact the contest. However, to my mind, the biggest question mark over any player in the league at the moment in regards to position has to be whether the Pies are best served with Jordan de Goey inside forward 50 or inside the centre square.

The Pies are one of two clubs this year to have two different players kick six or more goals in a game this year. De Goey is one of them. The catch-22, however, is that when he has the ball in hand sending the ball forward he almost always looks dangerous. Almost like Buddy Franklin, you just wish he could kick the ball to himself.

That may sound like praise but in all honesty, the Pies look pretty deficient wherever de Goey isn’t. In the first half, when de Goey had 17 of his 32 touches, Robert Harvey’s side looked like they’d struggle to hit a target forward of centre if their nan’s life was on the line. While remaining in the midfield in the second half, the Pies’ number 2 managed to have an impact in the forward half, kicking a goal in the third and having nine touches in the last when the Pies managed to get their run on. Overall, his 32 touches were beaten only by Steele and the excellent Taylor Adams, but no player beat his 10 score involvements and only Brad Hill gained more than his 486 metres.

It may well be that I’m being too harsh on de Goey, and the fact I haven’t criticised Mihocek, Cox, Elliott and the rest of the Collingwood forward line yet is that I actually didn’t realise they were playing until they decided to turn up for the last quarter. Mihocek had six of his eight touches and his entire score of 2.1 in the last, Cox kicked a goal to really give the Pies hope and Josh Thomas’ goal prior to that really sparked the game to life. Well, for me at least, because I thought the game was done and dusted until the Pies lifted with way too little time left. It does seem that even with Buckley gone, Collingwood still seem too reticent to take the game on until they know they can’t lose too badly, rather than trying to win.

I don’t even know what that pun is? I think it’s a play on the tandem bicycle. One of the more intriguing storylines heading into this game was whether Brodie Grundy, whose season has not lived up to his remarkable standards, could outpoint the pair of Ryder and Marshall, who may well be the best ruck pair in the league as it currently stands. It was a fascinating battle. Grundy, with the support of Darcy Cameron, managed 37 hitouts, outmatched by one to the Saints’ pair. The Saints won the clearances 40-33, including 13-8 out of the centre, and while they struggled to attune their midfield ascendancy to scoreboard output, this facet of the game was ultimately where the Saints earned their four points.

Around the ground, the points go to Ryder and Marshall too. Grundy had 19 touches and laid five tackles, while Cameron kicked two behinds playing largely as a forward. Grundy only had the one clearance though, to Ryder’s three, and struggled to really impact the game despite his touches. Meanwhile, the Saints’ pairing kicked three goals between them, out of their side’s 10 for the day, and on this basis the chocolates go to them too. Ryder, in particular, really lifted in the third when the Saints needed it. Having managed just one mark inside forward 50 from 28 entries which is, frankly, abysmal, Ryder stood tall and booted his two to effectively put the game beyond reach.

I’m not sure there’s much left to say about this one. I’m hoping my lack of enthusiasm for this contest hasn’t shone through too much, but neither side really looked too desperate to actually win this game. It was a match saved by its relatively frantic finish, though I’m not too sure why the Pies don’t take the game on throughout the way they did in the last five minutes when time was their enemy. Robert Harvey will look for his first win as coach against the reigning premiers Richmond at the MCG in what looms as a very interesting matchup, while the Saints ostensibly head north to take on the Lions in a game in which they’ll start as rank outsiders but where a win could see them inside the top eight come the end of round 17.