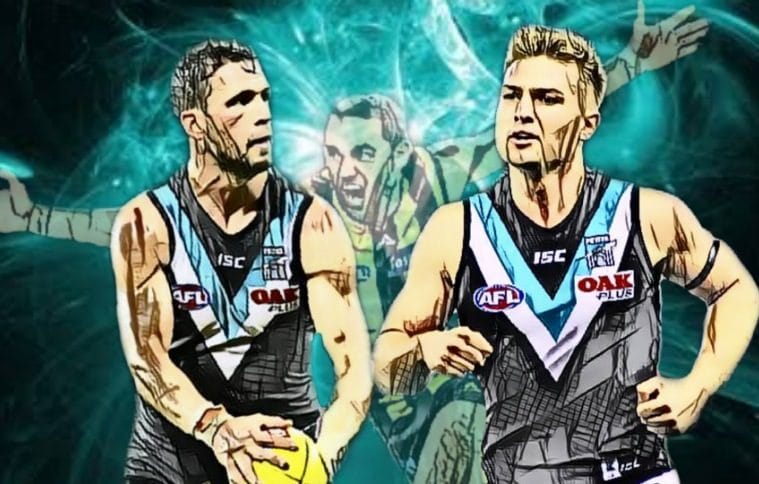 Coming into this game there was only one storyline that mattered. In case you hadn’t heard, it was Shaun Burgoyne’s 400th AFL game. He became only the fifth player in history to achieve the feat, and the first indigenous person, and it was rightly celebrated as the theme of the game. It was a nic move by the AFL, fixturing the game against his former club (They’re quite good at that).

The Hawks started the game hot but could not make any sort of decent impact on the scoreboard. Once Port settled into the game, it was within their keeping. They controlled the midfield and defence and dictated the flow of the game. From playing their own game style to forcing the Hawks into a long kick down the line style of play, everything was clicking for the Power for large sections of gameplay.

There was a period of the game, from the last ten minutes of the third quarter, to the first ten minutes of the last quarter, where Hawthorn got on a run and threatened to potentially reel the Power in and make them sweat, but they just couldn’t find that last goal to really grab the momentum. A notable miss by Jacob Koshcitzke really hurt, particularly when the Power took the ball down the field and Charlie Dixon would convert to effectively end the contest.

Clarkson threw Burgoyne forward in the final minutes, but I feel that it could’ve been done a bit earlier. Although, Clarkson is not known for being very sentimental.

Well, let’s get into the stuff that mattered…

AFL just does a great job with recognising player milestones. It is something that the whole sport is really good at. It’s something we all love. The respect between players has never been higher and with relationships often forming off the field between opponents its always great to see when supporters from multiple clubs can celebrate a true champion of the game.

The game didn’t go to script for Burgoyne, but I’m sure he’s fine with that. He’s enjoyed plenty of success over his career (Some of it at my own team’s expense). The dual guard of honour and being chaired off by players from both teams is the perfect symbolism of everything that is great about our game, and also Shaun Burgoyne.

Crowds at the footy

Maybe Tigers fans could learn a thing or two from Hawks fans about sticking by their club at any venue in Victoria. Understandably, it was an important game for the club, but Hawks fans showed up, and gee it was so good to have a parochial crowd in the house. The by-play of cheers every time Burgoyne touched the footy, and the boos for Connor Rozee after a few questionable actions trying to draw free kicks was wonderful. I’m sure I’m not alone when I say I hate footy without crowds and the noise from the crowd can sometimes be the most enjoyable part of the game. Who doesn’t love watching their team play in an opposition heavy environment and hear the crowd go nuts when one of your players gets an iffy free kick, or the call of “BALL!” orchestrally reverberating around the stadium every time a player is grabbed, regardless of prior opportunity? Mmmm… satisfaction.

Wines is just an absolute bull. He heads into the contest just looking for contact. Wines seems to want you to try and tackle him, so he can have the satisfaction of fighting through it. He wants to show you he is the stronger player. Hawks players constantly bounced off Wines as he hit the contest at pace and ferociously won the footy for the Power. Sure, he had a few turnovers, but I’ll take a few extra turnovers from someone fighting through two-to-three tacklers each time he gets the footy. In a year with so many new midfielders staking their claim for recognition in the All Australian side, Wines is absolutely leading that pack.

I did have some concerns about him replacing Touk Miller in the Mongrel Punt’s rolling AA team, but he put those to bed with this performance. I believe, in this game, he equalled his career highs in disposals (43) and clearances (13), had over 600 metres gained, and also laid a lazy seven tackles.

Dixon received a gift from the free kick to Rozee in the second quarter. He drifted out of the game in patches but was the forward who stood tall and sealed the win for the Power in a very professional manner. Probably unlucky not to have ended this game with five or six goals. He got plenty of one-on-one looks in this game which is a dangerous gamble to be taking with Dixon, but I thought Hartigan and Frost held their own in the contest. There’s only so much they could do before Dixon wore them down. Dixon finished with four goals and a game high nine score involvements, as he proved to be one of the key differences between the two teams.

This was one his better games this year. Fellow Mongrel writers have made mention that Worpel has been a bit quieter this season and hasn’t really been the same since his breakout year. However, I really liked his intensity. He was one of the few Hawks that was still lively during the Power’s period of dominance during the middle part of this game. He had over 20 disposals and kicked a goal and laid eight tackles.

Amon is a smuggler. He just keeps delivering while being very much under the radar. I do not hear enough about Amon. I’ve noticed him every time I watch a Port Adelaide game, but I seriously doubt he gets much traction outside of South Australia. He should be getting a lot more attention for the numbers he is putting out. Just check out his start to the second quarter. Just a couple lazy blind turns to spin out of trouble to get the centre clearance and then send the ball deep inside attacking 50. That’s the other thing about Amon. He kicks the ball, like a lot. Very direct and very long, which is a big reason why he led this game in metres gained, with 619.

Looked like another midfielder out there. His ability to follow up his ruck work is sublime. I was staggered to see he had so little of the footy considering how much I’d seen of him in the game. Lycett had multiple plays of charging through numerous players and looking closer to a 5’11” midfielder than a 6’5” ruckman. He is going to play a key part in any sort of push by Port Adelaide for this year’s premiership, and if he keeps having 8 tackles a game, streaming through contests like a midfielder and being a physical presence on the field, it will go a long way.

A solid game from Mitchell. I felt it was very efficient. It was always going to be hard matched up against Ollie Wines and Travis Boak on the other side. He did his usual thing and lead the Hawks in disposals (29), centre clearances (3), contested possessions (13) and inside-50’s (6).

Stood tall and (mostly) dominated the Hawks forwards. Ports defence looked absolutely rock solid in this game. The combination of Aliir, McKenzie, Jonas and Byrne-Jones looked impenetrable at times. Particularly for almost 60 minutes between the late part of the first and early part of the third quarter. Those four look set in stone as the key pillars, and I believe will match-up well on any forward line in the competition. They have a big test next week.

What a set of hands on Jacob Koshcitzke. He definitely needs to work on his kicking for goal though. Almost could’ve dragged the Hawks back into the contest on his own.

Tom Mitchell… stupid. His decisions to bump into Rozee and give away a free kick on the goal line was unacceptable for a player of his ilk.  It would’ve had Hawk’s supporters pulling their hair out in frustration.

Really tough luck for Kane Farrell. Always horrible for a player to go down with what looks like a long-term injury.

Some great play by Georgiades in this game to set-up a couple goals. Provides some really good forward pressure for the Power, despite being a big man.

Can someone check Travis Boak’s birth certificate? He just doesn’t look like a 32 year old on the field. Maybe it’s a bit like that case with that Button guy? He just seems to not be ageing. Very curious.

Really liked the look of Lachie Bramble on the wing. Looks to have a plenty of “go” about him.

Sam Mayes also deserved a mention for his efforts in this game. Very close to tearing it apart at stages.

A disappointing night for the Hawks who came into the match with some good form and didn’t give much of a yelp outside of two bursts. There was a question put forward that perhaps Burgoyne hangs up the boots at 400 even? Maybe. I think the idea has merit. It was a great send-off other than the actual game and the league celebrated him as the legend he is. It will be interesting to see how the Hawks treat his end of season as I don’t know if he’s confirmed if this is his last? But I digress.

The Hawks now move on to next week and a match-up against Fremantle in Tasmania. I’m actually looking forward to that game. The Hawks play the ground well and Fremantle will be smarting after a disappointing loss of their own to the Blues. Hawthorn may relish a chance to seriously hurt Freo’s chances of featuring in any September action.

Will the Power regret letting the Hawks slow them down for just over a quarter? With the top five teams so close and jostling for those top four positions percentage just may be a huge factor later in the year and the Power could’ve blown a big chance to add a few extra points to theirs a 42pt halftime lead and 48pts early int eh third before the Hawks got going. A final margin of 34 is solid, but it could’ve been so much more. Otherwise, everything went perfectly for the power.

They now shift their focus to a huge Thursday night clash against Melbourne in Adelaide. Melbourne have slightly dropped off their early season form which could provide an opening for Port who are looking for a big scalp to stake their claim as legitimate premiership contender.