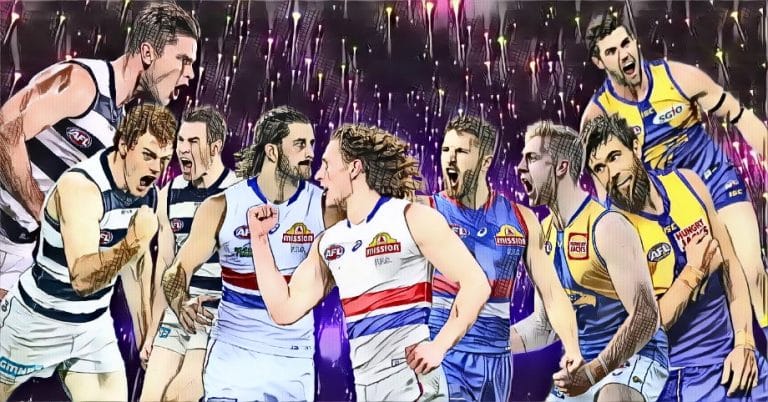 Forward Thinking – The Top Forward Trios In The AFL

The Balancing Act – How the top sides share the sugar.

The days of 100 goal seasons and big bags are becoming a distant memory for AFL fans. The sad truth is that it’s already been 13 years since Buddy Franklin kicked 102 goals in a home and away season back in 2008.

I miss Fev, Buddy, Lloyd and Gehrig challenging to kick 100 any given year. But the truth is, the game is now rooted in defence, in creating turnover, and attacking on the rebound. We are in a new era of footy. The modern game is centred around balancing the attack and having more than just one weapon inside forward 50.

This year, the addition of Jeremy Cameron to the Geelong forward line has sparked chatter around the water coolers that come September, they will have the firepower to win it all. With Tom Hawkins and Gary Rohan rounding out the three-headed monster, they have become a matchup nightmare for opposition backlines.

This sparked my interest, and with a bit of research, I have compiled a list to see how the top forward lines are able to spread the wealth. I focused on Geelong to start, but after comparing their forward line to the rest of the competition, there are a few sides that can boast a legitimate argument as to who is the top trio in the comp.

I looked at the top three goalkickers for every AFL team. I then listed them from 1-10 as a unit. To qualify for the list, a team had to have three players inside the top 50 goal kickers in the comp. This is how the list shakes out, with the total goals the three players have kicked being in bold.

By far the most goals kicked from any trio in the AFL. One obvious advantage is having the Bont be so dangerous delivering the footy on a sizzling silver platter inside forward 50 and being able to hit the scoreboard himself. With Naughton and Bruce, you have two key forwards who are legitimate aerial threats. A ten-goal haul for Bruce to start the year was always going to boost his numbers, and as the year progresses, many expect Naughton will sit atop the Dogs’ goal kicking list. Regardless, they’ve kicked the most goals in 2021 as a group and sit second on the ladder, proving balance is a key to success.

The timeless duo of Kennedy and Darling have been joined by Allen. Many, including myself, didn’t know how a third tall would be able to find a path to success with two dominant forwards who demand the footy. I think it’s fair to say that Kennedy has probably relinquished a little bit of his dominance over the forward line, which has paved the way for Allen to find more footy. Allen’s versatility means that between him, Darling and Kennedy, there’s a mismatch somewhere. However, the Eagles aren’t exactly flying in 2021 but are always dangerous come finals time. Their place on the trio list proves that they still are a matchup nightmare for opposition backlines and had Allen not spent several games in defence, we may have seen them sit atop the list.

The surprise of the bunch. There’s no doubt the Bombers have firepower upfront. A team that always seems to be flirting with success, their best looks good enough, but they seem to struggle to find it consistently. Their place in this list feels more like an outlier than a reason to think they will still be there in the business end of the season. The point of this list was to see who the best trios in the game are and Essendon proves that their forward line can compete with the best in the competition.

The noise around Geelong’s forward line is what started me on this quest. I was surprised to see them at fourth. From the chatter around AFL circles, you wouldn’t think there are three forward lines more potent than Geelong’s. However, I did highlight that Jeremy Cameron has kicked 25 goals in just 9 games. Much like Kennedy in the West, Tom Hawkins will continue to complement Cameron and Rohan, rather than smother them. The inclusion of Cameron also seems to have paved the way for Gary Rohan to get back to his best. The eye test tells you that they’ve got it figured out and have struck a real balance at the Cattery. For mine, they are the premier forward line in the comp.

Wanna support the work we do? Grab a Bumper Sticker and spread the Mongrel word

The inclusion of Joe Daniher to the Lions forward line has brought a much-needed knockout punch. In finals in the last two years, Charlie Cameron received a lot of attention and it often resulted in shutting down the Lions attack altogether. Now with Big Joe and his dirty Mo settling in, attention can’t be directed all at one player. Eric Hipwood is now on pace to kick a career-high in goals, and it’s no coincidence that success has come alongside Brisbane’s most balanced attack in years.

When teams are as hot as the Demons, there’s always a few that miss out on their share of praise. Fritsch and McDonald fit that bill. Bayley Fritsch is just one of those players that when I watch, I marvel at his feel for the game. He is a versatile forward who perfectly fits the modern game. He isn’t going to overpower anyone, but he can sniff out a goal and I love that about him. He has only failed to hit the scoreboard twice in 2021 and that sort of consistency is key to a successful forward line. Tom McDonald looked like the obvious player to miss out on the Demons top 22 when Ben Brown signed with the team. Not only has he held his spot but has contributed week in and week out. It’s no surprise that when Pickett is around the footy, maybe McDonald doesn’t get his fair share of attention, but he’s a close 2nd in the goal kicking race in the team that’s poised to finish the season as minor premiers.

A team that came out of the gate flying. It’s amazing how different the forward line looks with Buddy back. Three goals per game and his name alone demand attention. Add in Papley who has valiantly carried the Swans’ forward line in Buddy’s absence, and that’s an exciting combination. Heeney has also been able to hit the scoreboard and is on pace to set a career-high for goals this season. The Bloods feel like a true Smokey heading into the back end of the season and one of those teams that can knock off a favourite.

Getting to the bottom of the list and there feels like a real drop off from Sydney to the rest. Toby Greene is still one of only a handful of true individuals that can single-handedly win a match. This doesn’t have the feel of a Giants team that can really contend, and a forward line placed equal eighth would attest to that.

Looking at the data, it’s apparent that Richmond have fallen away in the balance of their forward line, and in the win’s column. Tom Lynch, after coming fifth in the Coleman Medal last year, has 39 players in the competition who have kicked more goals than him in 2021 (prior to round 16). The Tigers don’t need him to contend for the Coleman necessarily, but closing the gap between Riewoldt and the rest may restore some potency to a forward line that has been inconsistent.

Port Adelaide at tenth raises some alarms for me. When Charlie is contained, the Port forward line looks less dangerous. Mitch Georgiades is undoubtedly a talent, but time will tell if he offers enough of a one-two punch to Port Adelaide’s forward line to compete with the top teams. One thing Port Adelaide do have is plenty of contributors, Gray and Rozee offer plenty of spark in the forward line. Tenth place would suggest they are a step off the pace in 2021.

So, what does this tell us?

Immediately, you can see which sides have a balanced attack, and which sides are dependent on one player. Furthermore, teams such as Carlton, Adelaide and Gold Coast don’t feature, and that’s because they rely heavily on Harry McKay, Tex Walker and Ben King but get little contribution from anyone else. Many of the bottom sides have huge gaps between their top goal kicker, and the rest of the forward line.

The three players mentioned above are currently sitting first, second and fourth, respectively, in the Coleman Medal race. This tells us that although being the lone target up forward may be good for your Coleman chances, it doesn’t translate to winning. What is apparent is the direct correlation between the ladder position, and position on this list. 9 out of the 10 teams are the same, with the one difference being Fremantle not featuring in the goal kicking list, being replaced by Essendon.

AFL LADDER PRIOR TO ROUND 16

GOAL KICKING TRIO RANKINGS PRIOR TO ROUND 16