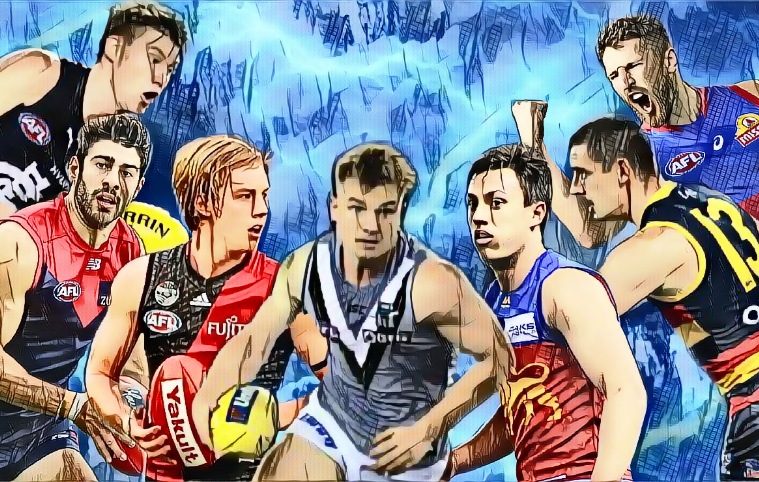 Well, here we go again. Five major cities are in lockdown, the hubs are back, and the season is starting to hang by thread. Gil and his team have moved quickly, and as I type these words, all 18 clubs are in Melbourne to save the season from completely falling over. But let’s focus on the here and now.

We successfully made it through the bye rounds, and that means our All-Australian team is like the Looney Tunes movie. It’s Back in Action.

After 11 rounds, this is how we stood going into the bye rounds:

CENTRE HALF BACK: JACOB WEITERING (CARLTON)

The last time Jacob Weitering’s name was in the conversation for a defensive spot, it was mentioned that both he and teammate Liam Jones have had to do far more than the average defender, such is the amount of ball sailing into Carlton’s defence. Against the Crows on Sunday, Weitering was at his absolute best, patrolling the Blues’ backline with brilliant ease, finishing with 22 disposals (eight contested), eight defensive rebounds, four score involvements, and an astonishing 16 marks.

It’s fair to say that I copped a bit of flak for keeping Power beast, Ollie Wines out of the team. Surging into Brownlow Medal consideration after another run of sustained excellence, Wines has finally become the player Port Adelaide knew he’d be. That’s not to say that Wines’ career hasn’t been excellent, because it most certainly has. It’s only now he fully cemented himself as one of the premier midfielders in the competition, and will undoubtedly return to the No.1 guernsey when Tom Jonas is ready to hand the baton over.

Yes, Buddy has only played 10 of the 14 games thus far this season. However, no one can argue that in the games he’s played, Bud has made the Swans walk 10 feet taller. Kicking 29 goals from his 10 matches, Buddy is hurtling towards the magical 1,000 goal marker, a feat that I predicted he would get to, just a year later than he is now projecting.

The question on the Swans minds now, is that should Buddy make it to the massive milestone before 2022, will he see out the remainder of his contract?

In order to accommodate the inclusion of Jacob Weitering, it meant one of the other defenders had to make way. We will get to who that is shortly, but suffice to say Jake Lever also had to be moved from centre half back. Where he landed will become apparent momentarily.

The only other change to positions are in the midfield. With Ollie Wines, coming in, Darcy Parish had to move back to the interchange bench. Bulldogs Jack Macrae and Marcus Bontempelli also swap places, just like they did in the last instalment.

It’s fair to say the bye rounds weren’t especially kind to Brandon Starcevich. He has taken some huge scalps this season, but Starcevich was also a very effective defensive rebounder, and these two aspects combined to make a player worthy of a place in the back six of our team. In the last four weeks, however, Starcevich has slowed, and although he is still playing well in the defensive side, his attacking flair has slowly deserted him, culminating in just nine disposals against Geelong. With Jacob Weitering forcing his way into the team, someone had to make way, and unfortunately, this time, we needed to see more from Starcevich to continue to warrant selection. Don’t worry, Lions fans, it’s an easy fix. Starcevich is still defending brilliantly, we just need to see more attack.

Let’s talk about those Suns on the Gold Coast. Every week it just seems to get a little worse, and it seems that every year provides us with plenty of déjà vu, with horrible losses, and discussions of relocations and their demise following the Suns at every turn. These losses make it very hard for their players to dominate, and it’s unfortunate that the two Gold Coast players that were in this team both find themselves out of the line-up.

The first is Ben King, who has no one around him to help carry the forward line load. Since Gold Coast’s victory over Hawthorn, King has regressed terribly, crushed under the weight of expectation and having to deal with the opposition’s best defender. In his last three games, King has only touched the ball 15 times, taken five marks, and kicked just two goals. At this level, this is simply not good enough.

Then there’s Touk Miller. Described as the heart and soul of this club, Miller has been the Suns’ best player by a country mile. Over the bye rounds, Miller averaged 31 disposals, 12 contested possessions, seven tackles, and four score involvements. With all these numbers factored in, you might be wondering why exactly Miller now finds himself on the outside looking in. Ollie Wines’ form has been spectacular, and it meant that one of our interchange incumbents had to make way. When glancing over the four players sitting on the pine, three of the players were currently in a team occupying the top 4, and the other playing for a team plummeting down the ladder.

So with all of that said, here is how we stand after Round 15:

Before the bye rounds came and went, I named one player from each club that had put together consistent brilliance worthy of inclusion in this team. For those unaware, these were the 18 players.

So who of those has elevated themselves? Who has fallen out of favour?

Of the 18 above players, Seedsman, Zorko, Mitchell and Boak are the most unlucky of the bunch not to be included in the team. All have been excellent, and it is only the very good form of the incumbents that excludes them. Darcy Moore will miss the rest of the season through injury, and Sam Docherty, Jack Riewoldt and Josh Rotham have hit a form slump. The rest of the bunch are still tracking along nicely, and I also need to mention Crow Ben Keays, who has quietly put together a career-best season, and is arguably in the conversation with Boak and Mitchell for elevation to the All Australian 22.

Anthony McDonald-Tipungwuti. It’s very hard to pinpoint Essendon’s small forward maestro. He’s kicked 29 goals this season, and has arguably been the pick of the small forwards all year. So why is he in danger? It’s not like there’s anyone else really banging the door down, and even when Tippa has a performance of mediocrity, his position is always safe. Having said that, Tippa needs to start dominating games more often, because if other small forwards start to pick up steam, Tippa’s position in this team will surely come under threat.

The only other player that is slightly in danger is Lion Hugh McCluggage. Don’t get me wrong, McCluggage has enjoyed a career-best season. But the sharks are circling. Paul Seedsman, in particular, has taken the wing position by storm, and McCluggage has just started to fade. Since the last edition of our team, McCluggage has averaged 23 disposals, a low for the season, and teams are starting to put the clamps on him, stifling his influence. Should this trend continue, Seedsman is the next in line to take McCluggage’s place, and it will happen quicker than any of us can blink.

To those of you that are currently locked down, please know that we are all in your corner. I for one thought we’d beaten this thing, but it seems like 2020 is the gift that keeps on giving, whether we wanted the gift or not. With all 18 clubs now in Melbourne, the season will thankfully continue, and another frenzy of fast, fantastic, free flowing football is hopefully upon us.

Let’s just all keep our fingers crossed, shall we!