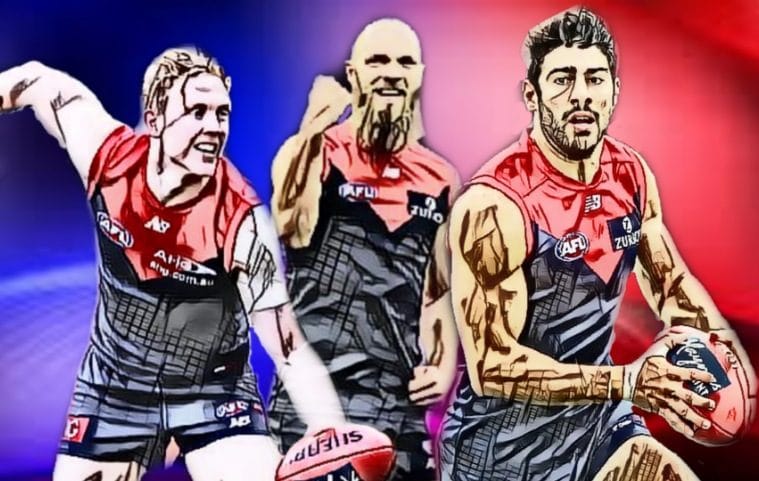 Fingers have been burnt and lessons have been learnt over the years for Demon supporters.

The Melbourne Football Club, have treated their supporters like an unloved pet at times. Yes, they have offered you the basics to keep you alive, but there has been no neck rubs, no cuddles. There has been no love. They know your heart belongs to them – it beats true for the red and the blue – and they have not worried too much about your loyalty. You ae a Demon, like it, love it, or not.

Oh, the club has toyed with you. They have held a bone out there and dangled it right under your nose, only to snatch it away and put it back in the fridge. And like a loyal puppy, you’re still there, still hoping that one day they’ll hand you that bone. Then, all will be forgiven, right?

I cannot blame Melbourne fans for being more than a little reluctant to allow the lid to come off just yet. Things are bubbling away nicely in 2021. The club sits atop the ladder with a game separating them from the Western Bulldogs – a team they handled with ease around a month ago. Players are performing well all over the field, and the Dees have something that other teams would kill for in the form of structure and depth.

Yes, that pot on the cooktop is really bubbling now, but Demon fans are standing there with a tea-towel, clamping down on that lid, hesitant to believe that this year may just be a little different.

I remember the last time they allowed the lid to come off. It was a little premature back then.

I recall the 2018 season well. It was our first full year at The Mongrel Punt and we were humming along nicely. Not to the level we are now, but nice enough that we were attracting an audience after a lot of work through the season. Around this time, so too were the Demons bubbling along nicely. As we reached September, you started to hear something in the voices of Melbourne supporters that had not been there for so long. There was belief. There was relief. And there was hope – a genuine hope that this could be the year they finally broke through.

The Dees dangled the bone ever so close to your noses that season. You could smell it – almost taste it, and in one fell swoop, on a trip to Perth, they not only pulled that bone away, but they threw it in the bin and took the rubbish to the kerb. They dared you to come along for the ride, and you did. You embraced what the club was selling. You hoped that 2018 would be your year, and the club was close to allowing you to dream big.

However, it turned into a nightmare in Western Australia.

Matched up against a rampant West Coast Eagles, the Dees were demolished by the eventual premier in such a manner that supporters felt like unloved and unwanted pets once again – not just any pets… like dogs that had been kicked in the guts by those they loved most.

The team was belted by the Eagles to such an extent that the thought of Melbourne as genuine contenders was erased from memory. 2018 would be both a beacon of hope at one stage, and the harbinger of doom at the end. It was almost the highest of highs.

It turned into the lowest of lows.

For two solid seasons, the club oscillated between looking like it could rally from that whipping in WA, to seeming as though the loss had completely eroded their confidence. The supporters, still stinging from the kick in the guts the club delivered, became less trusting, more cynical, and in some cases, bitingly bitter about where the club was heading. They didn’t want to believe anything the club was selling them, just in case this team lied to them again.

They were jaded and rightfully so.

56 years without any silverware will do that.

The coach was under the pump – after signing an extension, many questioned the coaching acumen of Simon Goodwin. Many thought he was a dead man walking in his role following poor showings in 2019 and 2020. Many were speculating as to who the next Melbourne coach would be.

Many are now quiet on those three fronts.

In 2021, this Melbourne team is unlike the collective that turned heads in 2018 – they seem a more relaxed bunch; more at ease with their place in the league. They seem as though they belong. Led by the dominant big man, Max Gawn, the Dees have found lifts from players who had juries deliberating on their place in the game.

First and foremost, the ascension of Christian Petracca into the upper echelon of AFL stars over the last couple of seasons has given the Dees a second commanding presence on-ball. His bullocking work, increased fitness and power off the mark have combined to provide an almost-perfect one-two combination with their young star, Clayton Oliver.

A few years ago, in the early days of The Mongrel Punt, I made a statement that Clayton Oliver, when all is said and done, would be hailed as an all-time Melbourne great. At just 23 years old (yes, soon to be 24), he has taken his game to career-high levels in 2021, averaging 31.14 disposals and 7.21 clearances per game. Many have earmarked him as a Brownlow Medal chance, and he is one of just three men to top 400 contested possessions in a season – he did it at 21 years of age. The other two are Josh Kennedy and Patrick Dangerfield. That’s some esteemed company.

With 234 contested touches to his name already in 2021, he looks as though he may just do it again.

And then you have the defence, which has been built to withstand the modern footy form of attack. It took Steven May 12 months and some harsh truths about his physical shape to get with the program, whilst Jake Lever’s return to form is now complete after a knee reconstruction and its lingering effects. With those two controlling the air and Christian Salem on clean up duties, they have managed to construct one of the best defences in the game.

They’ve also added run, with Ed Langdon doing just that. Every. Single. Week. Langdon is a constant outlet source for the defence and runs so hard that you often see him bob up in the forward line as part of the same piece of play. Some at Fremantle were critical of his skills by foot, but his ability to break lines far exceeds any perceived weakness in that area.

The Dees have also had career renaissances to coincide with their rise back to the top. Tom McDonald is playing like a carnivore again, gobbling up marks in a fashion that made him a feared player in 2018, whilst James Harmes has started to run-with players when there is a job to be done. When you add in the work of the selfless Angus Brayshaw, the dangerous Bayley Fritsch, and the young talent such as Luke Jackson, Kysaiah Pickett and James Jordon, you can see how this Melbourne side has managed to slay dragons in 2021.

But is that enough to sway those who have been burnt?

Do those long-term supporters look at the scars inflicted by this team over the years and refuse to buy into what is possible? Do they preserve their sanity by not engaging to the level they could? And if that is the case, at what point do they embrace what is, and let go of what was?

The Melbourne Football Club have done everything right in 2021, and as we begin to turn the corner and head toward September, it is the Dees leading the way on the AFL Ladder. They are now the yardstick, the hunted, and the best team in the game on form.

I hark back to the aftermath of the 2018 Preliminary Final loss and I can still hear the pain and anguish of Melbourne supporters on talkback radio, who were fooled by their team. They had that bone ripped away just as they were about to get a taste, and now, the club is whistling to them again.

The supporters are trying not to hear that whistle. They’re wary, keeping an arm’s length from the club that has been so cruel so often. Yet they’re being drawn back again. Slowly, but surely.

How long until they break down and accept that this club, win, lose or draw in the 2021 finals is giving its all to make things right?

The Dees will play September football. They will go into finals as one of the genuine contenders for the flag. They have passed every major test in 2021 and their playing list is in great shape. They’re calling you back. They’re asking you to stick with them and come out in your numbers.

They’re asking you for another chance, and there is only one thing you need to do to jump on board.