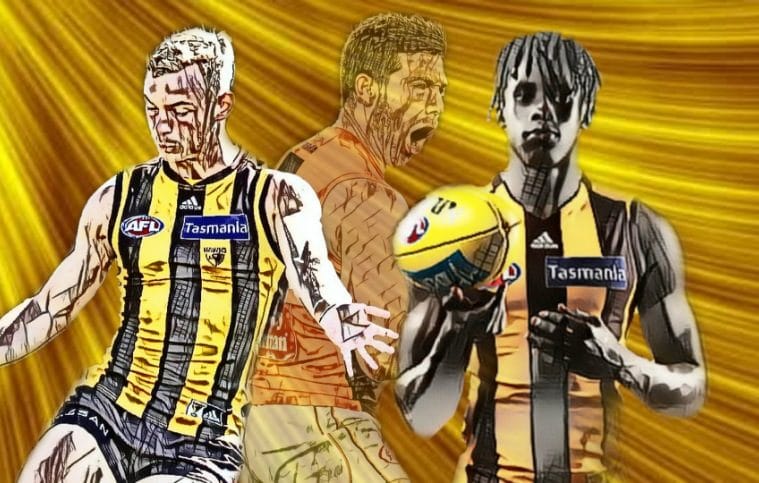 Lovely to be here. Sunday found us focusing on GWS vs. Hawthorn, a game that the Giants chose to be rescheduled to the MCG due to COVID concerns in Sydney.

This was only GWS’ second match at the MCG since their historic two at the end of 2019: the Preliminary Final defeat of Collingwood that I call one of the greatest defensive resistances of a siege in AFL history, and the Grand Final, which wasn’t. With an all-time record of 5-16 at the MCG (now 5-17, spoiler alert), they figured they could use the practice there.

Jason Dunstall, wearing his curious maroon jacket, discussed some pre-match wonderings. The main one was that GWS may well have to get used to a 2021 season away from home for a considerable time, but that young teams like GWS perhaps might enjoy that for camaraderie reasons, which has never been GWS’ forte. It was also mentioned that GWS are the number one clearance team in the AFL at the moment. Meanwhile, they said Hawthorn were the number two handball team in the league.

Hawthorn, who started third-gamer Jai Newcombe at the centre bounce in a why not, what-the-hell sort of move, took about 20 minutes to show up to this one. In the meantime, Harry Perryman, Bobby Hill and GWS had the run of things.

Blake Hardwick started on Toby Greene. Greene, who you pretty much expect to do something winning and precise every time he has ball in hand at this point, was a good focal point early on but misplaced two passes. GWS ruckmen Flynn and Briggs were on top for the time being.

Phil Davis won a 1 v 2 and handpassed off for Harry Perryman to drill a running shot from 50, part of Perryman’s repertoire of generally doing it all in the first quarter. Besides this, he took some spectacular grabs, and later showed “I’m watching a guy’s last play in AFL footy” courage running back into a marking pack. He had ten touches for the quarter.

Bobby Hill was particularly giving Changkuoth Jiath a bath in the first quarter. He snapped two goals out of scrambles, which showed the level of instinctive skill he possesses. He provided an assist for a third as well. Hill also rubbed in the vibe by immediately out-bodying Jiath near the boundary line after his second goal, which should be mechanically impossible given their statures.

Hawthorn’s pressure gauge read as 149 (rated poor onscreen), and even GWS’ was only 174 (average), despite strolling it. The commentary team was critical of some of these goals from the Hawk end. Perryman could have set up a picnic blanket for all the space he had, and Hill’s first came when Tom Mitchell hesitated to grab the ball surrounded by Hawks. GWS were getting good spread from their runners in the first quarter and their defence were blanketing any Hawk entries. They scored the first four goals.

At that point, this report would have required a fair bit of padding, but suddenly all was not yet lost for Hawthorn, whose kicking had begun at 58% efficiency. James Worpel, who intermittently popped up for great plays rather than being a consistent player, bullocked through for a magnificent first Hawk goal. Phillips provided an immediate second, and Will Day was already finding acres of space to run into.

However, Bobby Hill goaled and then shrugged off Jiath as mentioned before to reset the vibe, and Koschitzke had a bad miss for the Hawks, which could have shifted that vibe. He barely got a touch today.

Phil Davis showed up with stitches on a cheek, then McEvoy and then Ward both went off with bleeding faces early in the second quarter. “McEvoy will end up a human scar,” they quipped on TV.

A first-up GWS clearance suggested business as usual, but I could feel Hawthorn brake and shift momentum as the quarter wore on, if not yet on the scoreboard. Suddenly, they were winning centre clearances and locking the ball forward, though without forward method.

The first quarter and a bit was Denver Grainger-Barras watch. He is a Hawk debutant from WA who flew for intercept screamers all over – in defence and also pressing up in the front Hawk 50. We were briefly watching an aerial star being born. He also got into a scrag which led to Callan Ward’s bleeding face, which will warm the heart of Hawk fans (his spirit, I mean). His weakness was that he had careless turnovers from these great plays. He faded and later got booted from the game due to concussion.

Eventually, Dylan Moore snapped out of nowhere, and immediately numbers to the contests led to McEvoy scoring another. Will Day’s run allowed Tim O’Brien’s speccie in the goalsquare, which in my quiet opinion was bettered by Grainger-Barrass’ disallowed pack mark a few minutes earlier. O’Brien put Hawthorn in front and got off the leash (only) in this quarter.

There was barely a single GWS attack in the second quarter and they had no transition into their forward line. In GWS tradition they looked like they were losing it a tad. Greene gave away a stupid barrelling free kick in a marking contest and Hawthorn were winning all the 50/50s as GWS’ midfield, such as Kelly, vanished and Greene had no possibility of getting a touch with the ball downfield. He had only five touches towards half-time.

I can’t say I trusted Hawthorn’s disposal coming out of defence, including a couple of hospital handpasses from Mitchell, who should have known better. But there was more pressure and more general energy from Hawthorn, as well as better defensive zoning.  Jiath was doing much better, showing verve with a vigorous spoil over the boundary line, a real “up-yours” moment to the ball.

Will Day danced past his marker one last time but was intercepted by Lachie Whitfield on the siren, who handballed the ball away in fury. There was much head-shaking and ‘WTF is going on?’ conferences among the GWS players as they walked off.

The very first play was a Hawk clearance, a clever scoop off the ground from Wingard to Breust and a clever snap for goal. “It continues,” Anthony Hudson eloquently added.

This provoked a sequence where McEvoy immediately had a bad miss that might have buried GWS. From the kickout, Sam Frost took a great high intercept mark and simultaneously crunched Harry Himmelberg in the process. Frost was referred to as a “stop sign”, altering GWS long kicks. TV reported that that opening stanza produced a 262 pressure rating for the Hawks, off the charts. Eventually, Wingard took a high mark and converted.

Finlayson belting the ball over the boundary line unattended seemed to sum up the malaise GWS had sunk into. But this was the sequence that put them back into the match. Jiath fumbled a simple pass from the free; goal GWS. A universal in sport: When a team is sleeping, don’t wake them up! In the coach’s room Clarkson backhanded a water bottle with disgust, a clean contact by all accounts.

Lachie Whitfield had been one of the few Giants who stood up to Hawthorn’s heat throughout the last three quarters. A slick handball chain brought Greene an immediate second goal, before Whitfield further developed the GWS weapon: THE TORP!!

Torpedo punts have been coached out of the game, to the extent that anyone attempting 60-metre shots after the siren always produce wretched shanks. But not Greene, and now in midfield, Lachie Whitfield looked up and saw only Greene in front of his 60 metres away. So he unleashed the beast, a midfield torp. A backtracking Mitchell barrelled Greene for the free kick, who had been expertly held before these moments.

McEvoy, for the second time, badly missed a game-changer after the siren.

It was logical to expect the Giants to go on and win this one. Shaun Burgoyne was given game 399, on for Wingard’s hamstring injury.

Hawthorn, however, retained good run, particularly from the amazing Will Day, always sprinting forward with the ball, dodging to the left of his markers, delivering the ball well, accumulating 29 touches.

Third-gamer Jai Newcombe, who had not seen much of it, drilled a 50-metre set shot for his first AFL goal, a crucial one to pin to his wall. Burgoyne then defeated Toby Greene with a crunch tackle in midfield, another crucial moment as Greene was about to stream onto the attack. And then Dylan Moore had the final quarter of his dreams, scoring three final-stanza goals and was a “snicko” review from a fourth.

GWS made it interesting, but the last couple minutes, sealed by Moore, was one for the oldies. Luke Breust sharked a ruck clearance that looked like a carbon copy of his last-quarter goal against Fremantle in the 2013 Grand Final, leading to O’Meara’s goal. Burgoyne then provoked howls of appreciation in the dying seconds with a lovely pass. He then appeared to have a puncher’s chance of a 50-metre ping with three seconds left, à la Dusty vs. West Coast, but as usual, life stepped in the way.

I’ll tell you, if you really hate a team, you could really do worse than reviewing a stirring win involving inspiring performances from youngsters such as Day’s run, Moore’s goals, Grainger-Barrass’ energetic cameo. It left me with a warm feeling for a team I generally want to see in the gutter.

The match was a microcosm of GWS’ history. They look great, with run, good spread and strong defence when things are strolling, but the pressure increased and they couldn’t rise to meet it.