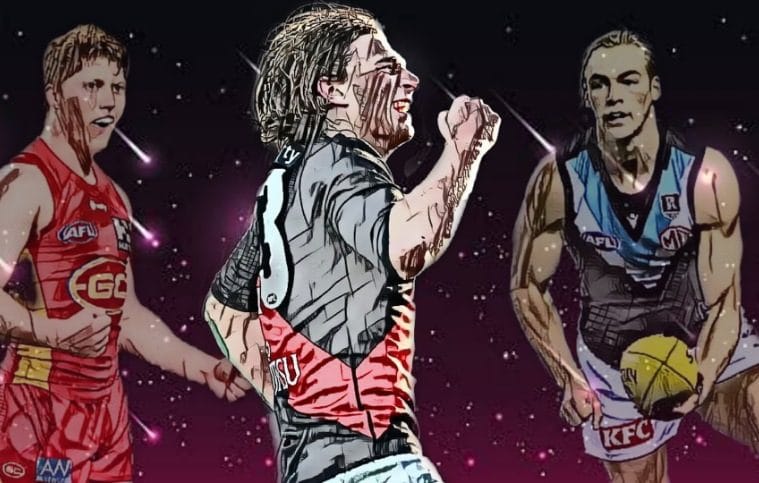 The Mongrel Rising Star – Round 14

Once again it was a little disconcerting to hear the media exclaim that young Bomber Jones was “finally” recognised with an official nomination. This is lazy reporting as it implies at best the incompetence of those awarding the nomination and at worst it disrespects those to have already received a nod. As we at the Mongrel have advertised that we do things a little better, now would seem as good a time as any to justify that claim.

Firstly, let me outline that Jones’ nomination was very much deserved this week as his five vote performance implies, however I take umbrage at the reporting which suggests this acknowledgement is somehow overdue. The current top 10 in the Mongrel Rising Star voting have all received a nomination, which of them could have been overlooked for Jones in the first thirteen rounds? Trent Rivers, Cody Weightman and Braeden Campbell are the others presently outside the top ten, the first two of which are permanent fixtures of two of the top sides, while Campbell had a stunning start to the year curtailed by injury.

Just celebrate the player in the spotlight this round, that is the purpose of this award after all, don’t use it as an opportunity to sleight someone else.

That brings us to the next point of business, who is in the mix to receive a nomination in the remaining rounds. From the Mongrel leader board those next in line include Caleb Poulter, Deven Robertson and Tom Powell who must all be in the thoughts of the selectors and would be worthy recipients based on consistent form throughout the year. Thereafter the following players have received weekly votes on multiple occasions and would be right in the mix with perhaps one or two more promising performances; Conor Idun, Lachlan Jones, Archie Perkins and Harry Schoenberg who is a regular just outside the top five most weeks.

No movement in the leader board this week as Nik Cox was well held by a Dan Howe tag, Tom Green missed a gilt-edged opportunity to extend his lead against the hapless Blues, and Jackson, Sholl and Jordan had byes. Thirty-six players have now received votes this season as impressive Power small Bergman and pre-season favourite for the award, Sun Rowell added their names to the growing list.

The key forward star in the making enjoyed a break out performance in perfect conditions at UTAS Stadium on Sunday. He set the tone early with a towering mark, following it up with an even better one which was sadly given to his teammate Hooker for an infringement. Karma was promptly applied with the Bomber big man launching the ball into his Hawk counterparts face.

The umpiring discrepancy didn’t seem to faze the number 23, and while I personally don’t like long sleeve jumpers, I give him a pass mark based on him rolling the sleeves up and his rock star hair, but back to his game play. A stunning five contested marks, including three inside forward 50 from a total of nine on the day made Jones a constant aerial threat. His two goals one could’ve been far more and alongside Stringer inspired his team to victory.

I don’t want to spend all my time in this article pointing out errors from other scribes but while I’m at it, Essendon’s recent recruiting and list management has been the envy of the competition but just to right a common wrong, Jones was drafted at #30 in the 2019 draft, not as one of the three top ten picks last season as is often quoted. Zac Reid is the unfairly forgotten member of that exciting triumvirate.

Last week we made mention Bergman had entered our radar, and this week he dropped the cloaking device and was a stand out for the Power in their demolition of a listless Suns. Bergman’s exquisite skills came to the fore as he delivered his 23 disposals with pinpoint accuracy registering 96% efficiency, however, his gritty edge for which he’s renowned was also on display with six tackles.

He added seven marks, four intercepts and a goal assist to a very handy performance that has helped to breath new life back onto the Power as they seek to overturn their curse against top four teams.

Speaking of chameleons, not the lovable fluffy lizards, but rather footballers who escape acclaim for a job well done, may I re-introduce Connor Idun. Luke Darcy declared Idun had not been beaten in a one-on-one contest this season, I haven’t been able to confirm that claim, mildly exasperated Darcy would’ve trawled through statistical data when I’m pretty sure all he ever reads is his own autobiography, however true this is a stunning achievement.

13 disposals at 93% efficiency, ten marks, four tackles, three one percenters, two entries inside fifty and two rebounds from defence make Idun the anti-Toby Greene in ever measurement apart from effectiveness.

The Hawk tall has gone from prospective delistee last season to his side’s primary key forward and is performing admirably in the role. While not racking up big numbers, his competitiveness and ability to hit the scoreboard would have his coach less punching walls as nodding along quietly.

His seven disposals generated three goals two behinds with three marks inside forward fifty, one goal a majestic banana kick after a strong contested mark deep in the forward pocket, the three tackles inside fifty would’ve been looked upon very favourably by team mates desperate for the Hawks to keep the ball in their attacking zone for longer than has been the norm as well this year.

After five rounds in 2020 Rowell was leading the Brownlow and had the world at his feet, two serious injuries since however has limited his ability to even get on the ground let alone continue his meteoric trajectory.

In his first game back on the expanses of Optus Stadium he looked a step behind the pace, however this week at Metricon he showed some familiar signs that he would soon be back in contention for the major rookie awards. 21 disposals and seven clearances were a bright spot on a dark day for his club, however only 88m gained point to the fact he has still yet to regain his line breaking and burst abilities so apparent from his stunning debut last year.

Liam Stocker. The Blues finally gain a mention in this article on the back of some consistent performances from Stocker upon his return to the senior team. Despite being matched up on the irrepressible Greene for periods Stocker was a good performer for his side collecting 18 touches with four assists and a goal assist and showing his workrate with six rebounds and three entries into the forward fifty.

Tom Powell. The highly-rated ex-South Australian showed some special signs in tough conditions against the ferocious Lions, some deft tap-ons and positioning more instructive than pure statistics in progressing his team to a competitive outing. Seven tackles and four clearances belied his wiry frame and would impress David Noble as a player he can build around for the Kangaroos ongoing development.

Deven Robertson. The tough as nails Lion midfielders pure numbers have suffered with the return of Brownlow Medallist Lachie Neale, but his endeavour is becoming a valuable component of the premiership fancy’s run towards September. While the five turnovers and efficiency below 50% probably kept him out of vote contention this week, a superb gather in the greasy conditions and bullocking run through several tackles before goaling on the run was a game-breaker.