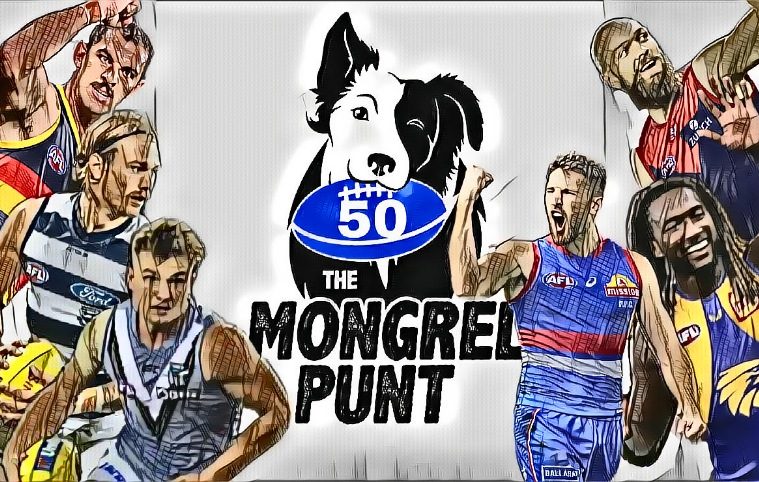 It’s been four weeks since we last visited the Mongrel 50, and with good reason.

As much as I would like to do this every fortnight, the bye rounds really seem to cock things up, so given that, I opted to wait until they were finished before compiling the fifth version of the season…

… and like teenagers in most unrealistic movies I watched growing up, I am so glad I waited.

Defenders often get a raw deal in player ratings. Looking at the current AFL player ratings via supercoach or dreamteam points, you find it flooded with midfielders. Same goes for every media award out there – mids, mids, mids.

I’m rapt this has turned out to be the point of difference, even if it ends up being a fleeting point. I’ll dive deeper into how we came to this situation below, but as of this period, having a defender as the number one man in the game feels… satisfying.

The first four weeks of 2021 saw Ridley on absolute fire. He racked up 120 points in that period and found himself slotting in at number four overall – a wonderful start for the reigning Essendon B&F. However, with a head knock and subsequent week off, Ridley’s form fell away. The next two weeks saw him notch two goose eggs, and in that period, his scores from the first two weeks took a 50% hit.

Fast forward another two weeks, all of his initial 120 points took a 50% hit, and he added just ten points in that period – down the list he went, all the way to 69 (dude!) a fortnight ago. Leading up to the previous rating period (up until R10), he has started to find form again, collecting 31 points. As such, his climb back into the 50 began, and now he finds himself nestled back in the 40s.

His first four rounds still count, but half as much as his most recent four weeks. This allows plenty of movement in the rankings, capturing those who are surging in form, but also those who have a solid body of work underneath to support them.

Round Ten ranks in parenthesis

For the first time in forever… thanks Elsa.

Seriously though, for the first time, a defender leads our Mongrel 50, and really, I cannot see anyone who has watched Tom Stewart play make the argument that he is not having one of the best seasons in the league.

A lock for an AA selection (it’ll be his third) and coming off a very nice last three games to bolster his previous work in 2021, Stewart displaces Bont at the top by a very slim margin.

It may not happen again for a while, so celebrate it while you can. Highlight plays get you on Instagram clips, but defence wins flags, and Tom Stewart is the number one player for this version of The Mongrel 50.

A 10-4-4-2 split when we look at mids/forwards/defenders/rucks in the top 20. Not ideal, but given the overall number one, I am feeling pretty content. When you factor in we have one from each category in the top four, that is sitting pretty well with me

YOU EVER HEARD OF TRAVIS BOAK?

Look, Boak is a star, but his last four weeks have not helped him at all. Everyone has copped a bye, but Boak has managed just 21 points over the last month. Compare that to, say… Bont, who has 73 points in that period, and perhaps you can see why he has faded?

Or perhaps you don’t want to see? That’s okay as well.

The good news is that Ollie Wines has been playing out of his skin, and picked up 110 points over the last four weeks to solidify a spot in the top ten… and maybe put himself in the box seat fro a Brownlow?

Monster fall from TK. He currently sits in 67th after scoring goose eggs over the last month due to injury. The same reason is attributed to the decline of Brodie Grundy (all zeroes), whilst Jack Darling… well, that is more due to average form.

Guthrie, at 58, is also packing a fistful of zeroes over the last month of footy.

13 of the top 50 come from the top three sides, with the Dees having six, the Dogs having four, and the Cats notching just the two, so I reckon this has balanced out a lot better now, after the last period saw 12 players from the top two sides.

Still, even if things blow out and we end up with 12 of the top fifty from the top two sides again, I don’t think I’ll mind too much.

The best players on the best teams… I like that.

Shai Bolton is down at 61

Harris Andrews is at 76

Lance Franklin is at 85

And the big recruit, who Jonathon Brown called the laziest footballer in the league, Zac Williams slots in at 131… money well spent!

I get asked this a but. How would it look if you removed the weighting to benefit players performing in the last four weeks? Ok, just this once…

Which version do you like better? I’m guessing Cats fans like the weighted version and Dogs fans like this one? Cats and Dogs… can’t you just all get along?

New Mongrel 50 will be out after R16, and for our Inner Circle Members, the Weekly Player Ratings that feed our Mongrel 50 are listed below for you to peruse.