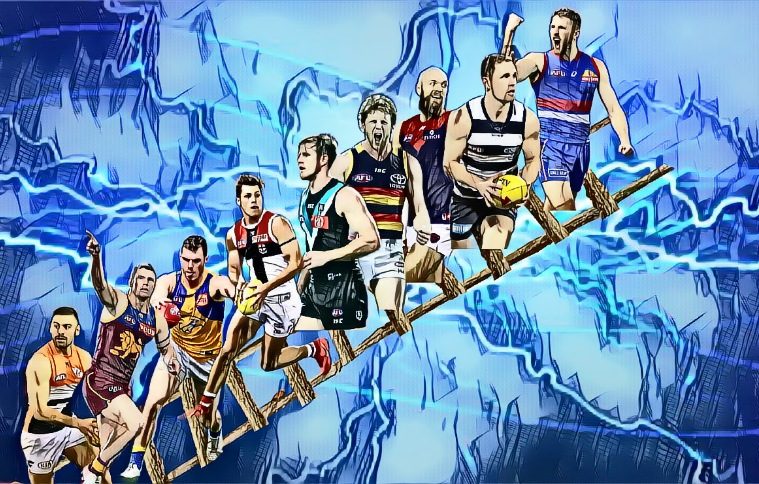 Okey-doke… time seems about right to cop a blast. That’s how these things end up, normally.

We’re 13 rounds down in the AFL season and the time is right to have a reflective view on what kind of job the leaders of the league are doing in 2021. No… not the AFL leaders – they’re attempting to remove all forms of physical contact from the game, apparently.

They are ranked 19th, behind every leader on every other team. Maybe 20th.

I’m talking more about the designated leaders of each club – those who inspire those around them to greater heights. That’s the theory, right? The captains in the league are there to provide leadership and inspiration when the team needs it.

Well, how are they doing? And how do they rate when compared to their peers? And HB, what criteria are you using?

Hmmm, okay – the criteria is based on their performances in 2021 only. No legacy votes in play. The rank pertains to their impact on their teams, as well as their own personal play. It encompasses their on-field behaviour and demeanour, as well as how they have stepped up, or down when it has counted.

So really,… what you’re saying is that you have a really loose set of guiding principles and are ranking them on opinion?

… yeah, in a nutshell. Also, I am often highly susceptible to the influence of recency bias, so there’s that to factor in as well.

Has led from the front all season and has made yet another step up in terms of his production. If not the best player in the game this season, he is certainly at the front of the line for consideration.

Kicks the big goals, takes the big marks and explodes from the middle with the footy. Inspirational.

With the Cats midfield down and in need of a lift, Selwood offered a reminder in Round 10, with the lazy 39 touches as he slotted into a team devoid of Dangerfield and Duncan, to lead his team.

Selwood has continued to commit his body to cause, and at 33 years old, may not be the bloke that steps up to the plate every week, but he retains an awareness of his team and where they’re at. When a lift is required, it is still Selwood that gets the Cats moving.

Hasn’t done much wrong as skipper this season and continues to put his body on the line by dropping into the hold either a kick behind the play, or as the “get out of jail” option for defenders.

Gawn is looking as though he will pick up his fourth All-Australian nod this season as he leads the league in contested marks and sets the powerful Dees midfield off and running with deft centre bounce tap work.

A welcome return to form from Sloane, after a 2020 season riddled with injury.

The Crows leader has accepted the role of third midfielder this year, but his pressure at the contest and desperation when it comes to giving a second effort are second to none. It was not mentioned much, but check out the smother from Sloane leading the to the game-winning Thilthorpe goal against the Saints. Thrilling stuff from the skipper!

Just keeps on keeping on and could be the best of the Magpies midfielders this season.

Consistent., hard-working and always classy, Pendles leads the Collingwood team with a mix of outside finesse and contested work when the situation calls for it. Led all players for contested touches in Round 13 as he put his head over the footy in Nathan Buckley’s last game, and won 20 touches in the contest.

That’s the way I look at the game of Tom Jonas. Whether back into a pack or leaving his man to aid his fellow defenders, Jonas’ unsung heroism for the Power has left no doubt that they made the right decision when they opted for a single captain, and bestowed that honour on him.

Really impressed with the way Dyson Heppell has grown as a leader at the Essendon Football Club.

Truth be told, I was a bit of a non-believer in him at one stage, but his move to half back has given the Bombers a steady presence there, and whilst I know there is another captain that has been deployed in a similar role, the work of Heppell in allowing his teammates to own their positions and roles, and adapting his game to fit them elevates him above the other.

Might rub a couple the wrong way, but Cotchin is now a “moments” player, drifting into the game and making an impact with one or two actions, rather than being the consistent ball winner he once was.

Under 20 touches per game for the third year in a row backs that up, but you just know that at some stage, when the Tigers need him, there will be a moment where he makes a huge difference. Been doing it for years.

I’ll start with Steele – this poor bloke… it’s like he is pushing a wheelbarrow filled with dung up a steep hill. No matter how hard he tries, some of that dung is going to fall back and get on him.

Steele has been great for the Saints, but they have not reciprocated by being great for Steele, and he tends to end up fighting a losing battle as those around him raise the white flag too easily.

As for Geary… his latest injury is just another kick in the pants he didn’t need. Has been a warrior for this club, but all warriors have a use-by date, and I reckon Jarryn’s is fast approaching, sadly.

A bit of an up and down season for Fyfe.

You never question the bloke’s efforts, and there have been occasions where he has dug in, said “enough” and compelled his teammates to follow his lead, however, he has also dropped the ball at times when the Dockers needed scoreboard impact, and that knocks him down a notch or two.

Like Heppell, went back into defence, but seemed to try to be everything to everyone back there. Maybe he had to?

Ziebell is having an excellent season despite North’s poor form, but he seemed to take on too much of the responsibility in a season where delegating some to others would have really benefited their development. Things have shifted in recent weeks, with Ziebell seemingly more prepared to defer to his teammates. Good signs.

We’ll skip Witts and concentrate on Swallow, given the big man’s absence.

Swallow is probably one of the more underrated number one picks of all time. As hard as nails and loyal as a labrador, his leadership at Gold Coast, whilst one of the few shining lights of the last few seasons, is yet to compel the kids to “come with me!”.

Hopefully, his example sees a few more follow along shortly.

Just haven’t been able to manufacture what you’d call a great leadership act, have they?

Cripps is all heart, but he is not really doing it for me defensively at all. If he isn’t running hard back to help, why should the others?

Docherty’s feel-good return in 2020 has now had a bit of the sheen removed and I listened with interest when a few people had a whack at him for not stepping in and taking some of the heat when the Blues were struggling… which is basically all the time, seemingly.

Right now, they have two blokes doing one role, and neither are doing a particularly good job of it. Still, they’re better than Marc Murphy…

Too many chiefs, not enough Indians.

Are you still allowed to say that?

Anyway, I am not the greatest fan of splitting the captaincy in two – even less of splitting it in three, but it’s difficult to fault the performance of any of the three. Kennedy is the elder statesman in the middle, Parker the current star, and Rampe has been unfairly labelled as a bit of a nut after the goal post thing a couple of year ago – he is a wonderful player.

However, taking three men to do the job of one cheapens the role of captain. Hence the low position. Apologies, Swans fans – pick a captain.

Seen as an interim skipper by most, the Hawks’ big man was elevated to the role this year and has had his highs and lows.

He is coming off probably his best game as Hawthorn skipper, but he is a far cry form the ruckman who could hold his own with any big man in the league, playing second fiddle to players like Jon Ceglar and Ned Reeves.

Hasn’t had a great run of it as West Coast captain, with repeated hamstring injuries rendering him unable to impact on the field.

His one game of 2021 saw Shuey play top-level football, only to push hard when the game was close to being in the bag, re-injuring himself in the process. There is a strong argument that the medicos should have helped him take the foot off the gas, but that wasn’t the case, and now the Eagles have been without their leader for 12 of 13 games.

Every time you start to see glimpses of the leader you’d love Dayne Zorko to be, he does something that makes you wonder whether he is the leader of the club, or one of their little league trapped in the body of an adult.

Swinging wildly between passionate, inspirational leader and juvenile, childish jackass, Zorko undoes any of his good work with his behaviour on the field, which ranges from adolescent baiting, to mock horror at a decision when he has clearly been in the wrong.

Frustrating player to watch, particularly when you realise he is now in his 30s. Youth is not the reason for his silly actions – genuine silliness is.

There were doubts over the leadership of Coniglio in 2020 as he struggled with the burden of captaincy, and he was even dropped from the senior team.

Sadly, Cogs has had very little opportunity to lead this team, injured for the majority of the season and handballing control of the side over to Toby Greene… who would rank much higher on this list should he be the actual captain of the Giants.

Who knows – maybe Cogs turns it around once he’s back, or maybe it becomes painfully apparent that being named captain and being a leader are two different things.