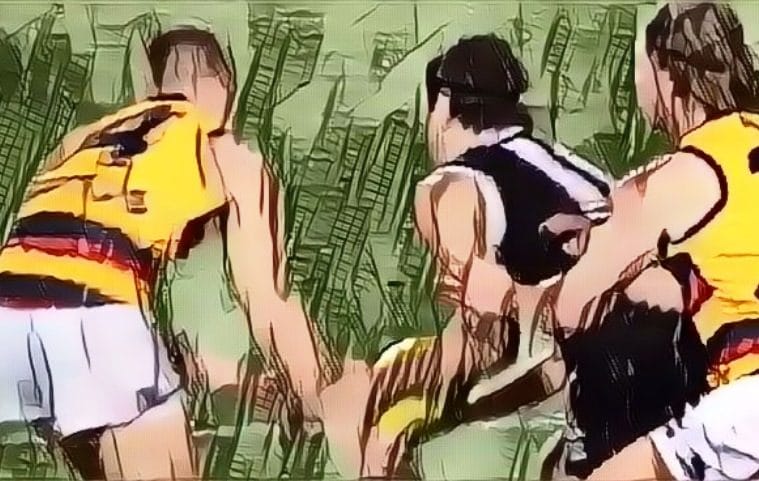 The Mackay-Clark Clash and what it means for the game

On Saturday evening, David Mackay of the Adelaide Crows and Hunter Clark of St Kilda collided whilst contesting the footy during their thrilling Round 13 clash.

A good, hard attack on the ball by both men saw Clark suffer a broken jaw on impact, and despite copious amounts of television replays showing both men arriving at the same time, arms outstretched with their intent being to win the football, the AFL, in a half-arsed response, sent the incident directly to the tribunal without grading it… because they couldn’t.

By not grading the incident, the AFL and its match review officer, Michael Christian, are basically stating they don’t know what Mackay did wrong.

They’ll leave that up to the tribunal to decide, as Christian and AFL Footy Boss, Steve Hocking seemingly don’t have the brains or the guts to do what they want to do. The way this is being handled, it makes you wonder whether they have any real idea what the organisation want to achieve, or how they want to achieve it.

Yes, it was disappointing that Clark sustained an injury in the contest, and one that will see him miss several weeks of action, but to refer the clash directly to the tribunal demonstrates not just an ineptitude in the Match Review system, but a demonstrated cluelessness in terms of whether there was anything untoward about it.

It was as though the AFL, Steve Hocking, and Micael Christian simply looked at the incident, put it in the “too hard basket” and shipped it off to the tribunal with a note attached – good luck with this one!

According to wikipedia (yep, that’s how I research… good old wikipedia), the current AFL Tribunal consists of David Jones (the person, not the department store), John Hassett, Will Houghton (has the fancy QC next to his name so you know he’s important), Andrew Tinney, Emmett Dunne, Michael Sexton, Wayne Schimmelbusch (my childhood hero), Richard Loveridge and David Pittman (remember when Blight called his effort “pathetic”?).

Some combination of the above people will determine whatever the case against Mackay is, and in the process, perhaps change the way the game is played.

A bit over the top there, Mongrel? A slight overreaction?

Allow me to take you on a trip down memory lane.

There was a time when a hip and shoulder bump was permitted in the top level of footy, irrespective of where it connected. Your shoulder hits a guy in the chin and knocks him out? As long as you don’t raise the elbow, all is well.

And then it wasn’t.

Next up, we had the bump further outlawed, with the AFL stating you cannot leave your feet to bump someone. That’d fix things, right?

So, they took it a step further. The AFL needed to make no bones about the fact that the head needed to be protected. Andrew Demetriou and his nerdy offsider, Adrian Anderson made the word “sacrosanct” part of the normal footy fan’s vocabulary as they related it to contact with the head. Come on… that’s how you all learnt what it meant – be honest!

Still, that wasn’t enough, either. Players soon found themselves in strife for doing something they’d been trained to do for a hundred years – tackling an opponent to the ground. This has become such a regular part of the game right now that we have free kicks awarded for holding the ball and two weeks suspension stemming from the same tackling incident. Don’t even get me started on the pathetic dangerous tackle decision against Marlion Pickett in the West Coast v Richmond game on Sunday – what a farce!

And so, we come to the moment of the Mackay/Clark collision being referred straight to the tribunal.

We are at a crossroads here. There is either an acceptance that that contact is a part of the game, or we go further down the futile road of eradicating every single possibility of sustaining head knocks. In the media, we have people championing either side, realising what this means for our game.

David King, former North Melbourne Premiership player, has been calling for Mackay to receive a three to four week suspension for the incident. His theory is that you either get serious about protecting the head, or you stop posturing and forget about it.

I like Kingy – he is one of the very few AFL media personalities who actually engages with his audience outside making a tweet and turning off his notifications. It’s good to see someone making the effort. I don’t agree with his stance here – not at all, but I respect the fact he has not wavered on this from incident to incident. He is attempting to hold the AFL to account. Do you want to protect the head? Then how me how much you want to protect it.

That said, his view that we should be getting people like Daniel Venables or Koby Stevens to sit in judgment of incidents like this is way off base. You don’t ask a guy whose hand his leg bitten off by a shark to assess how safe it is to swim at the beach.

On the flipside, we have Kane Cornes, as one of many who see the Mackay/Clark incident as a pure football clash, albeit with a terrible outcome for Clark.

Cornes, like myself, worries about where all this ends in the name of “safety”. He has cited jumping for a high mark as the next step to be looked at. We’ve seen some head injuries emanate from marking contests over the journey, with Curtis Taylor having his marbles scrambled earlier this season against Port Adelaide as a good example. Cornes argues that there is no more dangerous act in the game than flying for a mark. He may have a really good point.

I know, I know… many of you believe good points and Kane Cornes simply don’t go together…

My concern is for an area of the game not touched on recently in this discussion, but I can see this coming on the horizon like a storm.

Running with the flight of the ball.

It has been used as the example of the utmost courage in our game and highlight reels are littered with acts of this nature – running back into traffic, eyes on the footy, knowing that there is a big chance you’re in trouble, but committing to the contest anyway. That is what footy is all about, but in the name of safety, if that the next thing to be scrutinised? The next thing to be targeted as “unsafe”?

Imagine a game with Nick Riewoldt’s amazing running mark being disallowed, and worse, penalised? Jonathon Brown, Jimmy Bartel, hell… Ken F’n Hunter! Those blokes put their body on the line and displayed ridiculous courage on the field. Are we ready to kiss those acts that made the game so great goodbye?

What can the league do here?

What is their preferred outcome, and how do they get it?

The referral of the David Mackay hit on Hunter Clark directly to the tribunal smacks of an organisation that wants to do something, but has no idea what that something is. They want you take the situation seriously, but they’re not sure whether they can hold a straight face whilst telling you.

And so, that serial bruiser known as David Mackay will sit before the AFL Tribunal to answer the case of… attacking the ball?

If that’s the case, find him guilty and give him four weeks. Because that’s all he is guilty of.

My hope here is that common sense will prevail. The AFL, and Aussie Rules football is a sport unlike any other due to the nature of the game that invites pressure from all angles. It is a war of attrition at times, and when there are 36 bodies running around with a ball in dispute, there is bound to be collisions here and there.

You jump out of an aeroplane knowing the parachute may not open. You ride a bike knowing you may fall off at some stage. And you play Aussie Rules knowing that at some point, you are going to have to put your head over the footy or run back with the flight. It is part of the game. It’s common sense.

It’s just a pity that common sense is not as common as we’d like.

Let’s hope David Mackay is right to play in the next game and that Hunter Clark has a speedy recovery.