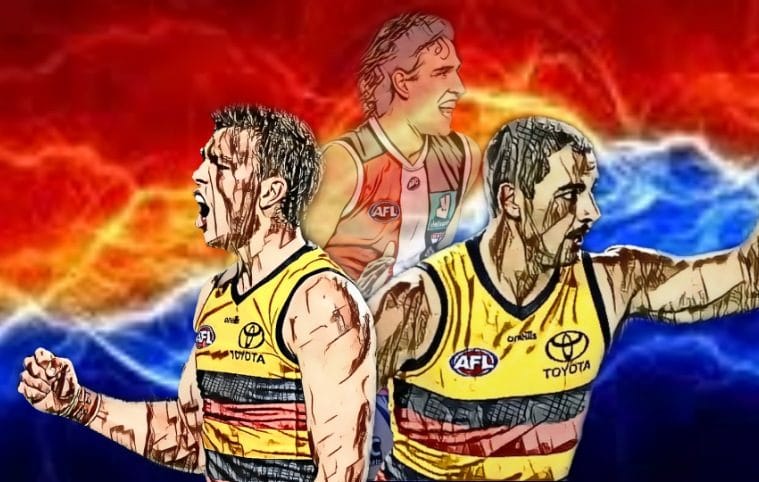 All I can say is “WOW”. I was not expecting that.

In a game played in Cairns, the weather was less than ideal. It was slippery but the rain held off for most of the game. It definitely wasn’t pretty football, with the turnovers finishing around 100-90 (I believe league average is somewhere in the 60’s per team?).

Only one team showed up to start this game. St Kilda. They dominated the opening quarter. They not only kept the Crows scoreless, they only had six inside 50’s for the quarter.  The Saint dominated the contest and starved the Crows forwards of opportunity and even when the ball did come their way, it was long and high and not to advantage, so the St. Kilda defenders were marking everything. The only issue for the “home” side was they weren’t putting enough of this dominance on the scoreboard. A late goal to Jack Sinclair helped the scoreboard look a bit more realistic.

The Saints’ dominance continued into second quarter. This was shaping up as a comfortable win for them. They were in complete control… until they weren’t. The Crows eventually managed to wrestle control of the game away from them around the midway point of the second. They’d finally turned up and got themselves going. They then had a eight minutes period that yielded only two goals and six behinds on the scoreboard. But it was enough. They’d locked the Saints in a vice in their defensive fifty and shown that when they got going, the Saints seriously struggled. The 20-point lead at the end of that period suddenly looked very vulnerable. The Saints would steady with the final two goals of the quarter, including one to Max King to boost his confidence and go into half time with a 30-point lead.

The third quarter was a genuine contest. However, once again, the Saints would come to rue their inaccuracy later in the game. They would kick the first goal of the quarter, to extend the margin to 36 points, and have plenty of the play, but would go on to kick only a further three behinds. Meanwhile, the Crows would begin to convert their chances and kick four straight goals to leave the margin at 15 points at three quarter time. Nervous times for St Kilda.

The heavens opened up for the last quarter. The ball became wet, and a game of territory ensued. Clearance became critical as getting the ball in your half became, essentially, the entire battle.

Now, Saints fans know what I’m about to say. It will be a week of reflecting on missed opportunities. You can think about an umpiring decision here or there that might have been a 50/50 or potentially not even there. However, the main focus should be your sides accuracy when kicking for goal. St. Kilda kicked no goals and three behinds in the last quarter. Two of those behinds were rushed, but Jack Higgins shot midway through the last quarter will surely be haunting the Saints this week, again. They can complain all they want but he has certainly earned the nickname “Missy”.

As the old saying goes, fast players slow down as the game goes on, but big players don’t get any smaller. This absolutely rang true for Thilthorpe who turned matchwinner for the Crows and effectively became the most dangerous player on the ground at either end in the last quarter. And even more credit to the young kid, he missed a tough opportunity late to try and put the team in front, after getting the within a goal, but didn’t let it get to him and was straight back into the thick of it at the next contest. Speaking of that contest, the smarts of Thilthorpe to throw the footy on his boot and have a shot over his head and then turn and run to be a part of shepherding it over the line. Glorious imagery.

This guy slipped some iron into the football pregame than ran around with magnets in his hands. That’s the only way I could explain it. The footy was just drawn to him early. Honestly, he came out of the gates like he was Corey Enright, just controlling this game from half-back. He did suffer from the worsening conditions late in the game and was quieter in the second half, but his impact was still substantial. Highmore finished with a game-high 15 intercept possessions (in just his 7th game).

Was a driving force from stoppages for the Crows. Keays was very noticeable in the way he broke forward out of stoppages and sent the ball long. He may not have had as many clearances as some others, but his really counted with the way he operated. Keays was in everything in this match with 31 disposals, five clearances, 600+ metres gained & 10 tackles.

This guy is just about the perfect footballer. There is nothing more that he could be doing for this team. Just check these numbers. 34 disposals (19 contested), 12 tackles, nine clearances, 12 inside 50’s and 600+ metres gained! Herculean. I have this inkling that training this week will be like the elevator scene in Captain America: The Winter Soldier, with Steele asking his teammates if they’re sure they want to be there before they start. He must genuinely wonder what more he has to do to get his team a win.

Arguably the Crows best player. I thought he looked a lot cleaner than most of his teammates. He was there on the last line of defence helping the ball across the line and then worked up the field to be the player sending it inside 50. His fist half wasn’t spectacular, but you could say that about most of his teammates, but his ability to lift in the second half was crazy. It was a huge effort. Speaking of huge. How about Lairds last quarter? 11 disposals (nine contested), five clearances, four tackles and four inside 50’s. Talk about lifting your team over the line.

Would be happy with his performance against his old side, but I think that would be outweighed by his disappointment in losing the match. Crouch played his usual game and got a lot of the footy and farmed it out to teammates. 36 disposals (19 contested), five clearances and six tackles is a solid night, but in a loss and with only three of those disposals being part of scoring chains, Crouch couldn’t break into the top players of this game.

One of the few Crows’ forwards that looked dangerous inside their attacking 50. The passage of play to demonstrate this war with about seven minutes left int eh last quarter. McAdam fought on ground level in the forward pocket with multiple Saints defenders to win the footy. It was a scrap, but the ball came out and got skied to the opposite pocket, and who was here first to pressure the Saints and push the ball over the boundary? McAdam.

Sinclair was huge early and was matching Highmore for level of impact on this game. The difference between the two ended up being that Sam Berry switched onto Sinclair and paid some close attention to him as a defensive forward and ended up nullifying Sinclair in the second half. The Saint would still finish with 24 disposals and 11 intercept possessions, but when you have 18 and nine in those categories at half time you’re really aiming for more.

Wasted the footy early in the night, but actually got better as the conditions worsened. He ended up being a major part of the push for the Crows to get back into the contest. The disposal efficiency is probably symptomatic of the conditions. Seedsman is arguably the best wingman in the competition (not an argument for our fearless leader here at the Mongrel, it’s fact). A true testament to his character, that despite the poor start and the dire situation on the scoreboard, his effort didn’t drop one iota. His numbers really justify a place in “The Best Stuff” but I can’t put everyone in there. 31 disposals, 700+ metres gained, seven inside 50’s and seven rebound 50’s, indicate a really balanced and strong performance on the wing for Seedsman in this game.

Valiant display in defence when under siege in the first half. Upon reflection, he is a very large reason as to why the Crows were still within striking distance when they finally got their game going. Doedee was a steadying force for the Crows down back. Doedee came pretty close to a defensive double-double with 10 intercepts and seven one percenters. Almost touching greatness Tom.

THE NOT SO GOOD STUFF

Was under the spotlight this week and really needed to stand up. What happened? Only six disposals for the entire match? In a game where St. Kilda could have revitalised their finals aspirations Battle failed to turn up and contribute. It is a poor reflection on a player of his ilk.

It was a very big hit by David Mackay. My judgement was that he was winning the footy and there is nothing wrong with going hard. It was simply unfortunate the Clark ended up with a broken jaw, but a suspension would only serve as a warning that going hard at the footy is becoming outlawed. You have to judge the action and not the outcome. This was a football action that had an unfortunate outcome.

Part of the reason why Seedsman’s efficiency was down, he was under a fair bit of pressure early form the likes of Webster. In a chain of possessions out of defence, he had multiple touches, but over 70m Webster kept chasing him and eventually got a hand on his jumper and severely affected the quality of his disposal.

Really good start to this game from Wood. Two goals in the first quarter that showed quite a bit of skill. He did fade out of the game at times but had some good moments in the second half that should help keep his head higher than some of his teammates. He had a fantastic diving tackle late in the third quarter was huge. He also took some solid marks in the last quarter as the outlet option, particularly in wet conditions. I’ve had a fair crack or two at Wood in the past, but I’ glad to see him out there.

Gee, it must be hard being a Saints fan. I do not envy you. Another game where you have legitimate claim to being the better team and simply haven’t taken your opportunities. Look at the bright side, you get the week off next week.  Such a fluctuating season so far, and it does not get any easier post-bye. With games looming against Richmond, Brisbane, Port and the Eagles in Perth. Ouch. They would need to play some serious football to turn this around.

Talk about a tale of two halves. But that also encapsulates the Crows season as well. This is a team that has beaten both Geelong and Melbourne in Adelaide, but also lost to Fremantle and Collingwood there…  go figure. However, coming back form 18th last season, the Crows would be very happy with their season so far. With a young team that can give up eight of the first 10 goals of a game, but then kick the last seven goals straight to win, you’re going to have be patient. The important thing is that they are fa more competitive.