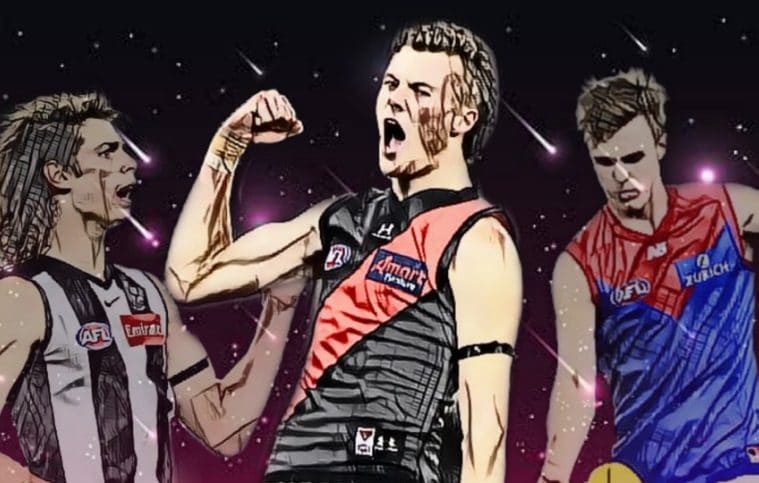 Of course, this doesn’t ensure our methodology is foolproof, but without being arrogant, we think we can do it a little better than the AFL. So without further adieu (we’re also cultured speaking French, Gil would love that), here is the next instalment of vote-getters in the remarkably catchily named ‘Mongrel Rising Star’ award for 2021:

There was certainly internal debate about the top vote scorer this week, the silky smooth marking capacity of Cox (in what became a heavy defeat), or the magnificent output from Poulter (in a backs against the wall victory). Ultimately it was the Bomber who won out narrowly this time, backed externally by a wave of public opinion. The myriad of exasperated media claiming finally in regards to the impressive Bomber’s nomination clearly illustrates what is wrong with the current process and why the old mongrel had the foresight to try a different method. While not claiming this system as foolproof, what it does allow is recognition of consistent high performers, not just a single stand out match.

There is also always the farcical situation using the official process where later in the year players are nominated based on a ‘body of work’ or to fill the quota rather than an exceptional performance that round. The allocation of votes each week makes that redundant and as you can clearly see by the leader board those high achievers are receiving due acknowledgement, while 31 individuals have been recognised in total for the season to date.

Speaking of the leader board, some significant movement after a few static weeks, Nik Cox swoops up to claim a share of third place with his eye-catching five-vote game, while Melbourne hard-nut James Jordan slides into the top 5 and within striking distance of the lead. More than halfway through the year and still no representation from the Cats, Eagles or shamefully the Blues – that may be about to change as two young Eagles sharing the same surname, Luke & Harry Edwards put forward encouraging performances on the weekend. Harry in particular was prominent with an 87% disposal efficiency, seven intercepts, six one-percenters and two contested marks, among nine for the day. Luke returned an identical 15 touches and added four score involvements as well as inside 50s which would have put a smile on coach Simpson’s face.

You’d be forgiven for thinking Nik Cox was Dusty Martin the way Luke Darcy salivated every time he was near the ball on Saturday night in the Dreamtime at the ‘O’ match, but to focus on that walking mannequin would be a disservice to Cox who is putting together a fine season to be one of the leading contenders for the inaugural Mongrel Rising Star award. The quality of the opposition was absolutely factored into the rankings this week, and Cox gathered 23 disposals, eight marks, seven score involvements, five intercepts, four clearances and a goal against the two-time reigning premiers who are building nicely for another assault on the cup.

Essendon’s strategy to load up on high draft picks at the expense of underperforming wantaway stars is proving a masterstroke if Cox and his fellow alumni Perkins, Jones and Reid are anything to go by.

Hard to miss with his luscious flowing locks, Poulter has so far bucked the trend of AFL players either sporting the charismatic mullet or the dour schoolboy cut, and it’s not only his choice of unique hairstyle that stands out, this kid can play. In a hot game against an overwhelming favourite the young Magpie utility in just his sixth senior match was one of his sides best collecting 20 possessions launching his side 482m in the process, ten marks, six score involvements and three tackles.

Collingwood’s “reset” last off-season which ultimately led to the loss of Treloar, Stephenson, Phillips and demise of McGuire and Buckley has at least netted some very talented kids who the new coach will be able to mould into the next stars of this proud club.

Can you be unassuming and a human battering ram at the same time? I vote yes if James Jordon is the example, the first-year Demon would comfortably have the highest winning percentage in the club’s history to date, and with contributions spanning twenty disposals at an elite 80% driving his side forward over 400m you wouldn’t bet on it diluting any time soon.

The former Oakleigh Charger proved his standout debut was no fluke backing up with another outstanding match in game two. 16 disposals, six marks, five score involvements, four tackles and an ice-cold finish from a set shot in the third quarter helped his side to a rare 2021 victory in the unfriendly confines of the Adelaide Oval.

In a tough week at the Holden Centre, both Bianco and Poulter brought some positivity to their club.

It was always going to be intriguing as to how the Lions would restructure with their returning Brownlow medallist claiming his rightful throne in the centre, pushing out Zorko, Lyons, Robertson and others to less starring roles. While Robertson’s disposal tally may have suffered his workrate seemingly doubled in an effort that would surely have pleased Chris Fagan.

12 disposals at a whopping 92% was a great return but more impressively the midfielder made eight tackles, two of these within his attacking fifty, drove the ball into the forward zone five times and retrieved it from the defensive 50 three times in a complete game.

Josh Treacy, the 19 year old Docker key position player has taken his chances created by injury and showed huge promise in a hard fought match against the finals-bound Dogs, snaring three goals and two contested marks from his ten disposals.

Harry Schoenberg, the Crow winger consistently turns up week after week, but his disposal has let him down in recent rounds otherwise he’d be sure to feature in the votes again. 19 disposals gaining 392m, nine inside 50s, six score involvements and three clearances were tempered by eight turnovers and a disappointing 58% disposal efficiency.