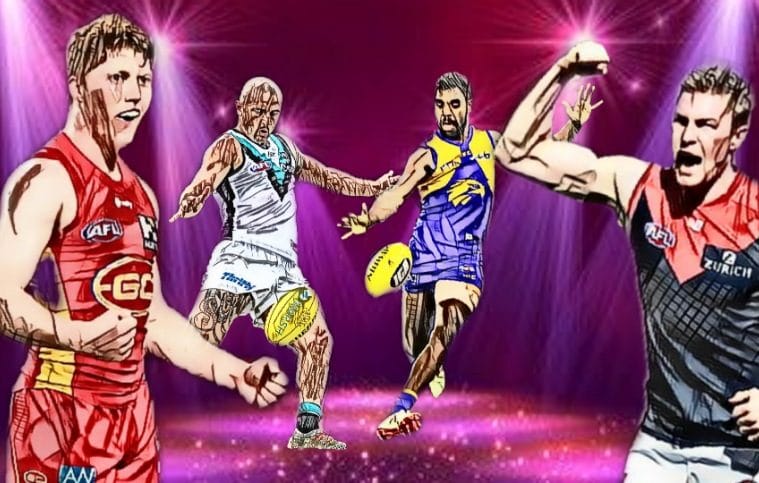 In The Spotlight – Round 13

After the first week of the scheduled byes have come and gone, and as we continue with Round 13, some more teams get a well-deserved break. Round 12 was an interesting one, to say the least.

Let’s take a look back at the players in last week’s spotlight to see how they went, then jump into this week, and see what players I’ll be keeping an eye on

James Harmes: 23 Disposals, two marks, three tackles
Pretty efficient (running at 87%) and had seven clearances for the game. His tag of Neale in the third quarter changed the momentum of the game significantly.

Riley Tilthorpe: Nine disposals, four marks, 1.2
Had Darcy Moore for company, and although he was overshadowed by Walker and Fogarty, his work rate to create room was a factor for the rest of his forwards.

Jack Darling: 12 disposals, four marks, three tackles, 1.0
Had his hands full as the only legitimate tall forward for the Eagles, but forced a contest often, as the small forward group decimated the Blues backline.

David Mundy: 30 Disposals, seven marks, four tackles
The leading possession winner for Fremantle and had game-highs with seven clearances and 14 contested possessions. Mundy lifted when the injury curse hit, however, it was too little, too late as the floodgates opened.

Port Adelaide vs Geelong: Sam Powell-Pepper
The big-bodied midfielder kicked 3 goals in his last game in round 11, drifting forward, but he could find his way back into the midfield especially with Geelong loading up on firepower. His bustling clearance work and strength will have to be a factor, as Port likely do not have the pure pace to match Geelong, so they will need to counter speed with brute force.

With Mark O’Connor also slated to return, SPP may be tasked with “stopping the stopper” but he also could find himself on the ever-improving Brandan Parfitt.

Sydney vs Hawthorn: JOEL AMARTEY
Sydney really have something special here… IF he retains his place in the Sydney side, he can cause some damage against what could be said as an “uncertain” ruck division. With big Ned Reeves and captain Ben McEvoy to contend with, the athleticism and aerial skills of Amartey could be too much for the Hawks to contain if their big men are fatigued.

Tom Hickey will take the bulk of the work, however, Amartey gives a more athletic option especially when defensively positioned.

Fremantle vs Gold Coast: MATT ROWELL
Likely to return, the hope of the Gold Coast Suns comes back after a PCL injury sustained against the West Coast Eagles at the beginning of the season. Stewart Dew has indicated Rowell’s rehabilitation work was “spectacular” and claims the midifleder to be more physically prepared than in the preseason. While Fremantle have been decimated by injuries (none more damaging than Captain, Nathan Fyfe) Rowell, I would expect to play limited midfield minutes and to instead roam around half forward.

Expect Dew to use Izak Rankine and Sam Flanders primarily as first rotation midfielders, then work Rowell into the game later. Fingers crossed for the red-headed maestro.

St Kilda vs Adelaide: JOSH BATTLE
Josh seems to have been around forever, yet despite being in the system for five seasons, the 22-year-old has merely shown flashes of what he can do as a “hybrid player”. St Kilda are in 12th position, however, they will lose Seb Ross and Tim Membrey for this crucial game against Adelaide. With Membrey out, Battle could be used up forward to pair with the wayward Max King.

Battle really “battled” last weekend with ten touches and a goal, however, he will need to turn potential into production if St Kilda are a chance of winning this contest.

North Melbourne vs GWS: JEREMY FINLAYSON
Finlayson is one of the smoothest moving key forwards in the game, especially when the ball is in close. He has the feet of a ballet dancer, however, he always seems to have an aversion to contact, and IF he comes up against Ben McKay, that is exactly what he is going to get.

Now that he is well and truly out of the shadow of Jeremy Cameron, he must step up and lead the fledgling Giants forward line. Finlayson is one of the deadliest kicks for goal in the game, however, he quite often forgets he is a 195cm key forward, as he tries to be a little too clever with the ball in hand.

West Coast vs Richmond: LIAM RYAN
Flyin’ Ryan tore Carlton a new one last weekend. Whether in the air or the ground, he was absolutely brilliant. This weekend, however, Richmond will not be able to play Liam Stocker on him, and they will do whatever they can to curtail the star small forward, as he is one of the true game-breaking players in the league.

A matchup with fellow West Aussie Nathan Broad could definitely be on the cards. Broad has the acceleration and aerial defensive skills to keep up with the tricky Eagle, so perhaps he is the likely opponent.

Melbourne vs Collingwood: TOM MCDONALD
Arguably the AA Centre Half Forward at the midway point of the season, the converted defender has been brilliant as the linchpin of the Demons rise back to being a powerhouse. In this marquee timeslot, I would be disappointed to see anything other than Moore vs McDonald. For the love of god, I hope the incoming coach doesn’t use Brayden Maynard, as that would be an absolute massacre. Give the people what they want.