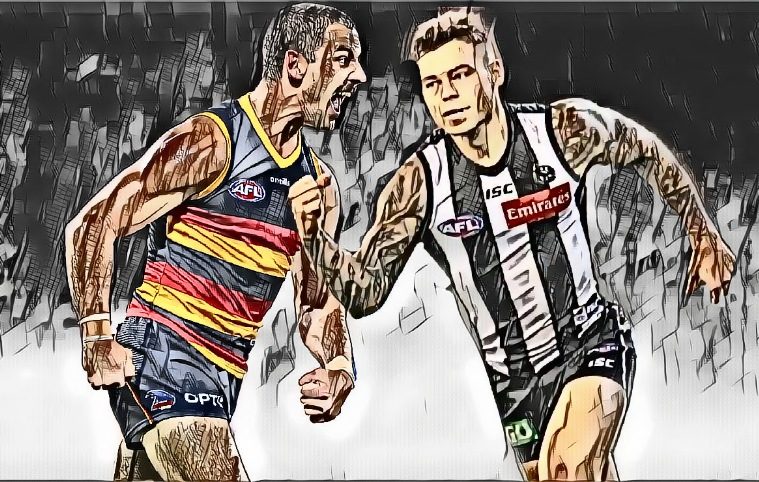 This would have made a great western.

At one end of the ground, you had the formidable, and effective Tex Walker. He’d been found guilty of gunning down multiple teams this season, and had the position in the Coleman Medal race to prove it. He was the aged gunman, the one with the big reputation and the notches on his well-weathered belt to prove it.

And at the other end of the ground, the upstart, Jamie Elliott, or as he’s better known, Billy. You know him? The Kid… With a knack for getting to the right place at the right time, these two would be on the end of a mountain of opportunities in front of goal for their teams. Their mids were putting the bullets in the gun, but it was up to these two to hit the target.

But only one did.

Jamie Elliott succeeded where Tex Walker uncharacteristically fell down in this game, kicking six goals straight to carry the, until recently, malfunctioning Collingwood forward line to a big road win over the Crows. At the other end, Tex Walker resembled more of an Imperial Stormtrooper than a gunslinger, spraying his shots to finish with two goals and six behinds.

You give Tex a pass on this one. He seemed to tweak a knee early in the game and whether that bothered him or not, we’re not completely aware, but his radar is not usually off like this, and like it or not, it was accuracy that decided this contest.

With many pointing to the performance of Nik Cox as the potential Rising Star nominee this week, there should be plenty of consideration given to Caleb Poulter. Given the same role as Cox has at the Bombers, Poulter collected 20 touches, snagged a goal and ran hard along the wing to collect 428 metres gained for his team. It was the most impressive performance of his young career to date.

Trent Bianco was solid again, with his 16 touches and a goal of his own, but the Pies managed to win this with not just two youngsters on the books, but four. Poulter, Bianco, Max Lynch and Jay Rantall combined for a total of 13 games before lining up for this one. When Bucks said he’d play kids, he meant it.

Manky finger and all, Scott Pendlebury spent most of the game deployed across half back, and was a calming presence with the ball in hand, applying his customary composure to distribute the ball to a teammate on the run. As always, he was an island of serenity in a sea of chaos.

Is this the natural progression for the ageing legs of Pendles? And if so, how long is his career prolonged in the process?

I am quite torn on this Magpie list – on paper, it looks very good, but in practice it just hasn’t been anywhere near it. In a rebuild, Pendles playing half back and distributing the footy is worth its weight in gold, but is it worth having him fill that role when there are players who can already do that in the age bracket that will see them be around for plenty of years? Maynard and Crisp can both fill the role and are substantially younger. If Pendles is moving to half back with the midfield depleted by the loss of Taylor Adams, does he move back there at all?

The Pies are starting to experiment and whilst Pendles isn’t a five-year option at half back, he could be wonderful for another couple of seasons working from defence. He may not be Mr Right, but he could definitely be Mr Right Now.

WINGMAN OF THE YEAR

Looks like another change at the top of the table in our Wingman of the Year Award this coming week. Paul Seedsman and Hugh McCluggage have traded top spot four times this season, and with Seed sitting in second place before this game, and Clug not having a big game on Friday night, it was all ahead of him.

And he grasped it with both hands.

Clocking up over 700 metres gained, slotting two goals and collecting 27 touches, Seedsman owned his wing, mainly against Josh Daicos and demonstrated just how hard he runs, each and every game.

Concerningly, his counterpart on the other side of the ground, Lachie Sholl, is displaying signs of fatigue and is looking as though the grind of the season is getting to him. This is the third week in a row he has failed to hit 20 disposals and the running power that was so evident in his game earlier in the season doesn’t not seem as apparent later in games. He was beaten by Caleb Poulter in this one, when a few rounds ago, many were flagging him as the potential Rising Star winner.

He will be one to keep an eye on in the second half of the year. He looks like the bye will do him the world of good.

How good is it to see a forward know exactly when to lead, and his teammates genuinely put the ball out in front of him to run straight at?

Jamie Elliott snagged six-straight, but the service he received should not be dismissed at all. It is something thr Pies have been lacking just about all season – good delivery inside 50. It was back in this one, with Elliott licking his chops in the first quarter to slot four goals and turn the game on its head. His hard leading, good timing and, more than anything else, ability to kick accurately, were a stark reminder of how simple the game can be when the skills of the game are executed properly.

It’s funny that, as good as he is, Jordan de Goey did not command the same level of service from his teammates over the weeks Elliott was on the sidelines. De Goey is a very good player, but he is a hybrid forward – Elliott is a full forward in a forward pocket’s body. His instincts as to when to feign a lead and when to change direction to receive the ball are first class. You just cannot teach it.

I love watching Rory Laird play footy. He has made the transition into the midfield seamlessly over the past 12 months and is the poster boy for what teams like Carlton want to do with players that usually play half back – he has become the team’s most consistent midfielder.

Laird is a hard worker, solid over the footy and has great hands at ground level. His seven clearances, seven inside fifties and nine score involvements yielded two direct goal assists and he would probably get my votes if a little fella hadn’t kicked six.

Laird provides a touch of class in a midfield full of grunt. Whilst you cannot fault the endeavour of Ben Keays and the hard-at-it style of Rory Sloane, Laird has provided the level-headed stability the Crows have cried out for this season.

My hope is that his efforts are recognised on Best and Fairest night, although it’ll be tough to top Tex at this stage.

It was fitting that it was Jamie Elliott’s best goal of the game that gave the Pies the lead for good. Bursting from half forward, Elliott didn’t look like missing once he took a bounce and hit the fifty metre arc.

With the Crows hitting the front through a scintillating piece of play culminating with Shane McAdam running into the open goal, the heat was on, and as he did in the first half, Elliott stepped up to the plate and knocked it out of the park.

Say what you want about the Pies this season – they have been ordinary, but down their number one ruckman (Reilly O’Brien had a party in the air as a result) and with a board in disarray, Jamie Elliott showed the type of killer instinct you’d love to see from every player out there. He was an assassin in this game, and unfortunately for the Crows, they were simply unable to find anyone to match his output.

Before I wrap up, a little shout out to Darcy Cameron, who really stepped up in the final couple of minutes as well, clunking two big contested grabs to help ice the contest. On a day where he was down, he certainly picked the right moment to stand up.

In the wash up, this was a great win on the road for the Pies. A gutsy win, and the type of win that you can build from. It was gratifying to see them play an attacking brand of football again, as opposed to whatever they had been playing up until this point.

For the Crows – close again, but in a season where finals are not on the cards, securing another good kid via the draft will go a long way toward re-establishing them as a power. They have several high quality pieces in place or developing – now, to complement them. A nice free agent wouldn’t go astray, either.

Note – Apologies for the shorter form review of this game. Unforeseen circumstances meant I had this game thrown at me unexpectedly.