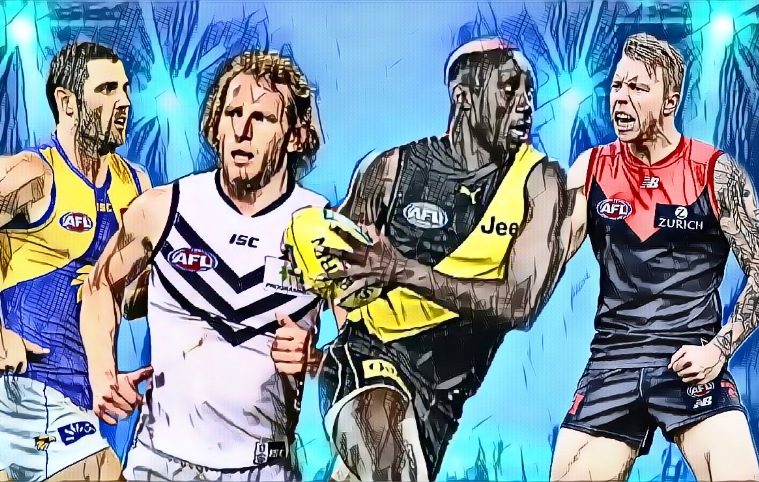 In The Spotlight – Round 12

Round 12, teams begin their bye weeks, recovering and rediscovering their prospects for 2021. That too, must be said for the players. Some have shined, some have faltered, some have not shown up whatsoever. All that’s certain is that the business end is fast approaching and players will have to make the most of their opportunity “In The Spotlight”

Let’s take a look back at the players we highlighted last week and see how they went, then we’ll get stuck into Round 12…

Josh Daicos: 15 Disposals, three marks, two tackles
14 of 15 disposals were uncontested, as he spent the majority of the game uncharacteristically running around half back.

Lachie Whitfield: 30 Disposals, 11 marks, 87% efficiency
One of Giants’ best players for the day. Combined his run with customary effectiveness with ball in hand.

Damon Greaves: Nine possessions, two marks, 1.0
Lost Rankine in the first quarter, however played him well until Rankine moved to midfield. Managed to kick his first goal after running off half back later in the game

Connor Rozee: 15 Disposals, six marks, one tackle.
Horrible, with 47% disposal efficiency. Worrying signs as he could not get amongst it, despite his side winning by 46 points. Looks like he needs a rest before he is fully broken.

MELBOURNE vs BRISBANE: James Harmes
After superbly shutting down Tom Liberatore last week, Harmes will likely get the assignment on the returning Lachie Neale in the midfield in this pivotal contest. Both midfielders work both ends of the ground and are more than capable of hitting the scoreboard. Harmes will have a physical advantage and despite lacking lateral quickness he may look to counter with his bodywork and defensive positioning.

This looms as an enthralling match-up between two ultimate competitors, and you can be guaranteed Harmes will go at Neale 100%, especially with barometer Rhys “Beast Mode” Mathieson dropped, Brisbane will need to protect their star midfielder from the physical style Harmes can play.

SYDNEY vs ST KILDA: Brad Crouch
The high-priced recruit has struggled with his efficiency in the past fortnight (65% and 57% in his last two games) but looks more comfortable with his role in the St Kilda midfield. He has always been criticised for his lack of two-way running, and a match-up with Luke Parker beckons. Crouch must make sure to work hard defensively, as Parker will take him to the contest and look to run him ragged around the field.

St Kilda have been a very average defensive team throughout 2021 so he might not get a chop out from the rest of the midfielders if Parker gets goal side.

ADELAIDE vs COLLINGWOOD: Riley Thilthorpe
In an exciting match-up, Thilthorpe looks likely to have Darcy Moore for company in this contest. Jordan Roughhead will likely play Taylor Walker, leaving Tilthorpe for Moore – one of the elite key defenders in the competition.

Moore likes to sag off and intercept, however, it will be up to Tilthorpe to make sure he is accountable. The young Crow possesses great hands in the air, and has a very quick release off the mark, which could be problematic, as Moore has been susceptible in 1-1 contests.

ESSENDON vs RICHMOND: Mabior Chol
With Toby Nankervis out, the onus will be on Chol to lead the ruck division for Richmond. Chol has been the recent subject of defection rumours, and this opportunity presents itself for Richmond to see what Chol provides, or to drive his asking price up further from competitors.

Essendon have had their own ruck issues, having lost the hitouts by 48 last weekend to the Eagles, despite still getting the win, so it will be interesting to see how they combat the big Tiger. Andrew Phillips will get first crack, and he must be wary of Chol roaming around the forward line, Phillips has been around a while and always gives maximum effort, so the Bombers fans know they will at least get a contest on the big expanses of Optus Stadium

CARLTON vs WEST COAST: Jack Darling
West Coast head into this danger clash with Carlton minus a ton of firepower. Along with gun midfielder Tim Kelly, two thirds of the Eagles tall forwards in Oscar Allen and Josh Kennedy come out, leaving Jack Darling to carry the load.

Like Jekyll and Hyde, Jack Darling has two forms. Darling has the ability to lead a forward line on his day, however, if he gets the yips, it could make for an ugly outing. He holds advantages over both key defenders for Carlton (Strength over Weitering, Speed over Jones) however if he is in congestion he will find it near impossible to make an impact as Carlton will be throwing everything at him. West Coast must prioritise quality forward 50 entries to give them a chance of holding on in this contest that David Teague will be desperate to win

FREMANTLE vs WESTERN BULLDOGS: David Mundy
The 35-year-old Mundy has been sensational for the Dockers midfield in 2021, currently averaging 26 possessions a game at 73% efficiency. With the slick Bulldogs midfield coming up, Mundy will likely try to stop clearance machine Tom Liberatore, however, should also be used on Bontempelli at times if Libba is given the defensive role on Dockers captain Nathan Fyfe.

Mundy lacks pace in his ageing legs, however, his disposal is as deadly as ever, as he never wastes a possession. He is still being one of the most dangerous midfielders in the game with ball in hand. For Fremantle to be any chance of causing a big upset, their eldest statesman must have a blinder.