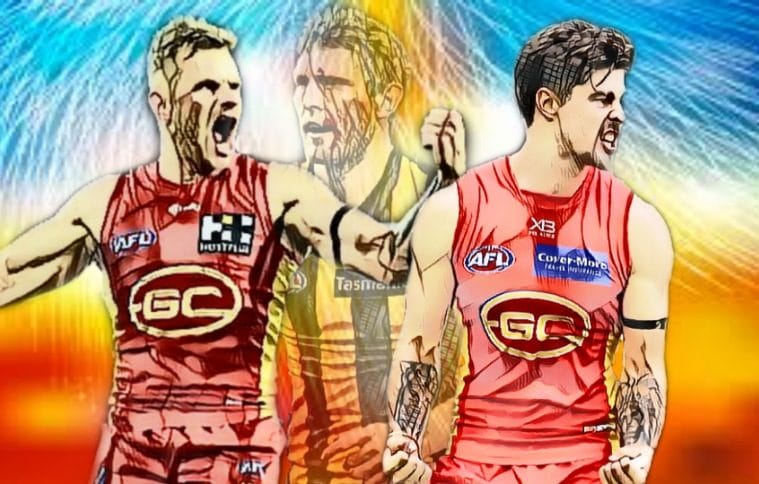 At the midway point of Round 11, the Gold Coast Suns did battle with Hawthorn at the SCG in this Covid-affected round. In this matchup we saw 15th vs 17th, but both sides still had plenty to play for.

In the end, it was Gold Coast and coach Stewart Dew taking the chocolates over his old premiership club by 37 points, with the Suns kicking their highest ever score under the tenure of their fourth-year coach. Let’s take a look at how this contest played out.

The Suns kicked away after increasing an 11pt margin at quarter time and maintaining a steady buffer that they would never relinquish, kicking the opening goal of the game and never trailing. Of note, Gold Coast kicked their highest half time score since Gary Ablett Jr was running around in their club colours, using a deft combination of defensive aerial prowess, hard two-way midfield running, and a more even forward line spread to get the win and keep Hawthorn to just two wins for the season.

THE NEXT BIG THREE

In their most well-rounded forward display, the big-name forwards for Gold Coast all managed to impact the scoreboard and make their mark on the game. The Suns were led by big forward Ben King who kicked 4.1 from 14 disposals while taking eight grabs, he was a constant menace to Sam Frost, who was missing his counterpart Kyle Hartigan due to suspension. Recently recalled half forward, Alex Sexton chipped in with 3.2 from 19 touches

Enigmatic forward Izak Rankine added a career-high 4 goals while also getting in some midfield time, which he made good use of. Damon Greaves actually played Rankine as well as he could have. With two goals coming over the back, Rankine’s third cashed in a downfield free kick and number four came against a different opponent after an umpire missed a blatant push. Greaves also managed to consolidate with a goal of his own. The part I want to focus on however is just how assured Rankine looked in midfield in the second half. His unpredictability and creativity around the contest meshed brilliantly with the inside grunt work of the Suns’ usual suspects – who I will touch on a little later.

RUCK BATTLE
It was an intriguing ruck battle to say the least. The Hawthorn tandem of Ben McEvoy and Ned Reeves had their biggest impacts around the ground, with Reeves kicking his first goal at AFL level after a grab in the goal square, and McEvoy looking dangerous when pushing forward. In the middle of the ground, despite winning the hit outs by 29, Gold Coast were able to gain five extra clearances.

While not being dominant by any means, Zac Smith was able to use his big body and make life tougher for the opposing rucks. His added pressure added a hand to the defensive edge the Suns needed to add. Chris Burgess, the right-hand man of Smith, combined with him well, adding a goal while resting forward as well as a few clean possession clearances. McEvoy was very handy when moving forward, however got caught out a few times trying to cover defensively, due to the Suns clearing kicking game and pace. Smith, to his credit was a presence in close, with 24 hitouts and four clearances from his nine disposals.

MILLER AND HIS MEN
The transformation of Touk Miller from stopper to all-around midfielder is complete. Miller was once again the catalyst for the Gold Coast midfield, accumulating a game-high 37 disposals, with nine marks, seven tackles and a goal. He started with James Worpel but Liam Shiels was given the assignment after the first quarter, however, was unable to curb the influence of Miller. He was the Hawks leading disposal winner with 26 touches, and stuck to his task, but he needed more help to stop the onslaught.

Miller was ably supported by captain David Swallow and Hugh Greenwood as usual in the clinches plus wingman Brandon Ellis, who had been down on form the past few weeks, however, reprised his superb link-up role on his wing. Tom Mitchell, coming off 44 touches last week, was unable to escape the pressure of the Suns midfield, led by the close attention and acceleration of Lachie Weller. Worpel and Chad Wingard were handy in patches however Stewart Dew pulled an unexpected change and added some X-Factor into the midfield with half forward Sam Flanders, who applied some great defensive pressure to Wingard, in particular, and managed to add another element in close with his quick reactions a factor.

FEED ME MOORE
Dylan Moore was superb for Hawthorn around half forward, while also pushing into the middle in open play. He was a constant threat throughout, with his bodywork and clean disposal a feature. He was one of a few Hawks who attacked the game from the very start.

Moore finished with 2.2 from 18 touches, eight marks and four tackles. On the odd occasion he was given an inch, he would take a metre, and made the Suns pay whenever he was able to get ball in hand.

CLEARANCES OF ANOTHER KIND
Jack Lukosius was sensational for Gold Coast in a return to his customary half back role. With some of the kicking attempts he takes on, I’m not sure I’ve seen a young player more confident in his own skills. While he is prone to biting off more then he can chew at times he can make kicks that not many players can or attempt to make.

Commentators ALWAYS use the phrase “Quarterback Role” when talking about half backs that distribute the ball by foot. I hate the term, however, I’m going to use it… in a different context.

The great quarterbacks such as Tom Brady and Drew Brees were known for being able to lead their pass catchers, and put the ball in a very tight window that only their receiver has a chance of making a play on. With this context of “quarterback role”, it firmly applies to Lukosius and maybe two other players in the whole competition. On a number of occasions, Lukosius was able to put the ball exactly where it had to go, but what makes him special is that he varies his heights, angles, and distances constantly.

In one passage of play he drove his foot into the ball and unleashed a 60m flat dart from half back to the attacking 50, then as he ran forward he received a handball from Nick Holman and lent back on a 55m chip shot that sailed through with ease. The surprising thing is that Alistair Clarkson was always well known for taking a team strength away, however very little time was put into Lukosius and he made Hawthorn pay with 27 touches, a career-high 14 marks, seven score involvements and eight rebound 50’s to compliment his goal.

BRETT’S BLAST: Sam Frost
Frost tried hard with Ben King, and was soundly beaten. He was unable to rebound efficiently, as King kept him on the move through the majority of the match, and a rib injury in the third quarter slowed him down significantly. He gets “the blast” purely from a very poor piece of play that he will not want to look at again. Body language is everything in this game, along with second efforts and never believing you are out of the contest.

If you want to see it for yourself, rewind to 16:00 remaining in the very first quarter.

Chad Wingard turned the ball over 65 metres out from goal with Rory Atkins pinpointing a pass to Ben King. Frost whiffed on the spoil, flying by King, who took the mark. Upon seeing Frost had over-committed, King immediately played on and waltzed into an open goal, BANG.

It was suddenly 3.1 to no score. The problem is that no sooner had King taken the mark, Frost’s eyes immediately darted up field, and never once does he even watch King kick the goal. He was already ripping his mouthgard out to give a spray to (probably) Wingard. Sure, let your mate know he made a mistake, but your first goal should be to limit the damage and have the back of your mate.

Malcolm Rosas Jr played a great defensive game on Changkouth Jiath. Jiath was troubled by the close attention and wasn’t able to get moving until the last quarter. I noticed particularly he only has two running patterns, he either runs in a straight line into space, or he will lead for a little, hook back around and expect a kick- even if he is only ten metres away. The young Gold Coast forward bought some much welcome defensive pressure to the forward line.

Shaun Burgoyne looked pretty rusty early in this game. With so much inexperience in this side, Burgoyne took a while to get going, however did some handy things later on.

Hawthorn look much more composed with Ben McEvoy behind the ball, especially as Reeves has shown he can go forward.

The Hawthorn key forwards had no chance against the Gold Coast defence, however, they battled extremely hard in this game, with Mitchell Lewis, in particular, having to fly against multiple opponents. He often forced a contest and kept the Suns back-line honest, having to spoil a lot of forward 50 entries, which limited the intercept marks.

Although not needed until a fourth quarter injury to Noah Anderson, I thought it was a very strange move by Stewart Dew to use centre half forward Josh Corbett as the medical sub. With his aerial strength and endurance as major weapons, it was a bit of an odd selection. Luckily, it had no bearing on the contest.

Blake Hardwick is one of the most underappreciated footballers outside of Hawthorn. He does whatever the team needs to, and would throw himself through a brick wall for the good of the team. Every squad needs a Blake Hardwick.

Solid game for Jack Scrimshaw against his former club, I just wish he had the same belief in his kicking as Lukosius does of his, he could be a very dangerous weapon.

I was surprised that James Cousins was not put on Touk Miller right from the word go. He battled valiantly against Sam Walsh last week, and deserved the first crack at the rapidly improving Miller.

Will Powell once again gave great drive off half back with a game-high nine intercept possessions. He is really thriving down back and his reading of the play was outstanding. He must be taking a lot in from having Sam Collins down back. Special mention to Collins who had only nine touches however seven intercepts