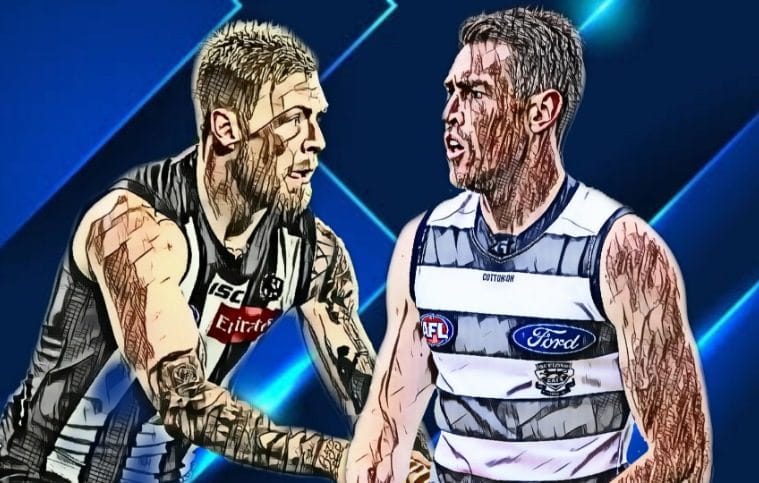 It was the Cats and Pies in a game that promised a bit and delivered a lot less.

The Pies made it close with a five-goal last quarter, almost making up for one-fifth of that output through the first three quarters, but it was not enough to reel in the Cats, who won their eighth game of the 2021 season.

Two Mongrels cast their eye over this game, with the Slugger drilling down on his beloved Cats, and JB Eddy donning the black and white of the Magpies.

It was a game that may be best-forgotten, yet here are these two blokes, providing not one, but two points of view. I really should give them a medal!

WHO WAS THE MATCH-WINNER?

Brandon Parfitt. Or as BT would say, ParFITT. In a game where the Cats went in without their two best midfielders in Mitch Duncan and Cam Guthrie, as well as arguably their best ruckman in Mark Blicavs, someone needed to step up in the middle in a big way and Parfitt did just that. At halftime Parfitt led the game in clearances (three), contested possessions (eight), disposals (18) and metres gained (418 metres). To top it off he also had two direct goal assists. Talk about being the difference…

The big step up in Parfitt’s game has been his ability to take the footy from inside to outside the contest. He’s always been a tough player and good in the clinches. But now he has acquired the ability to get the footy and break tackles and clear it to a teammate in space and even find that space himself. It is a great sign for the Cats as when they have a full team to choose from it will only add to their growing arsenal of midfielders who can do this. Parfitt would have a quieter second half but would still finish with 30 disposals and be one of the dominant factors for the Cats.

For my money, the match-winner was Parfitt. From the very first run from half back, he was involved in most of Geelong’s forward thrusts. He managed 30 touches, 4 marks and 5 clearances, but the stats alone don’t tell of the impact his run and carry had, especially when very few players were willing to take the game on for all but the last five minutes of the match. Hawkins was a close second.

WHERE DID WE WIN/LOSE THE GAME?

In defence. Yes, the Pies were inaccurate, but our defenders, led by the unflappable Tom Stewart, were so aggressive and assertive at simply attacking the footy and winning it, they left their opponents behind on multiple occasions. It got to the point that when the long ball was coming in, the Pies forwards were marking their defenders, and not the other way around. To sum it up, when Scott Pendlebury is having his kicks intercepted by defenders, the Pies are having a bad day.

There were some big games in the middle for us, but you only have to speak to people about the “unwatchability” of Geelong games and it always comes down to our ability to stifle the opposition with our defence, and that defence delivered big time in this game.

Both teams were terrible in front of goal, but Collingwood were determined to take poor options into 50, as well as choosing to snap the ball under pressure rather than set up a teammate.

The transition game was also very ordinary, with several intercepts that came from very slow decision-making, telegraphing the intended target and making it very easy for Geelong to run off their man to impact the play.

WHAT WOULD YOU HAVE DONE DIFFERENTLY?

As a footy fan, I would’ve played a slightly more attacking brand of footy. Just to make the game a bit more pleasing to the eye. But it is half a chance that this opens the game up too much and gives the Pies an easy look at goal that they convert and suddenly we’re not waiting until the fourth quarter for a game of footy to miraculously appear.

Also, I would’ve forgiven the Cats for flooding back a bit more in the last quarter. Sure, it would’ve been even uglier, but they wouldn’t have allowed the Pies get those cheap goals.

Much like Collingwood did in the last few minutes, I would have put an emphasis on having a runner by at every stoppage and playing on at every opportunity. Moving de Goey into the middle was a good idea, but it did hurt forward options and marking power inside 50. Once Grundy went off, it was also very hard to adapt.

There was also a lack of structure in the first half. I know this is the sort of thing commentators throw out there regularly as part of a shopping list of faults, but the number of times multiple Pies players would run to the ball, only for it to squirt out of the pack to the opponent they’d left was too damn high.

Tom Hawkins. Yep, the reigning Coleman medalist is playing underrated footy at the moment. In fact, I would argue he is playing better footy right now, than he was last year. He is definitely moving better than he has for over a decade. He is very clean with the footy for such a big man, and I have a suspicion he has been taking some salsa dancing lessons, or similar, with the way he stepped around a couple of defenders in this game. The Tomahawk can move!

Then, to top this all off, he has continued his unselfish nature with the footy. He got his reward with a couple of goals in the last quarter, but Hawkins was the most effective forward on the ground in this game, which is showcased by his 12 score involvements which is well clear of the next best with nine.

Trent Bianco. Not sure how underrated it will be, but it may get lost as people want to forget about this game. As a debutant, he racked up 19 touches and looked very at home at an AFL level. He also managed some nice tackles and was fairly effective in forward 50 entries, which put him on a shortlist of Collingwood players who could say the same.

THE MOMENT THAT MATTERED MOST?

I’ll go with “Moments that Mattered”, and those moments were all of Collingwood’s missed set shots at goal. Every time they had one, I was waiting for them to nail it and really grab the momentum off the Cats, but it just never came. Particularly in the third quarter where the Pies stopped the Cats in their tracks and gave themselves some very good shots and just… kept missing them. It was inexplicable.

You have got to feel for Nathan Buckley – he can draw up a game plan and make adjustments, in game, for them to get shots at goal, but ultimately the players have to convert them and because they didn’t, it looks like it’s going to be to his detriment.

Another significant moment was Brodie Grundy getting subbed out of the game. Having kicked the Pies only goal and being one of their main weapons, it was a critical blow to Collingwood’s hope of a comeback victory.

Just under six minutes to go and with Geelong up by four goals, Jeremy Cameron gathered from a Narkle handpass and snapped a flat, inside-out shot off his left. It put the game beyond Collingwood, even though they did make a late charge. The conversion took the wind out of their sails.

You could also argue that Grundy going off will matter the most in the forthcoming weeks, as if it’s a neck or collarbone, he could be out for an extended period, which will really hurt the squad’s game. Collingwood actually upped the tempo after he left, so it didn’t destroy them in this match, but the next few will be a bigger challenge for them without him.

WHICH PLAYERS LET US DOWN THE MOST?

Bit harsh this category. I am usually a fan and a defender of this player. He does good things that a lot of fans don’t notice and has played some bloody good footy for the Cats this year. However, in this game, Zach Guthrie was a liability out there. At times he just didn’t look up to the level.

I am actually hopeful that Scott won’t drop him, as there were definitely other Cats players out there who could’ve been put here but weren’t, as Guthrie’s worst moments are often so much more costly.

I don’t want to attract the ire of the G-Train by potting players, but I think Mihocek would love some of his shots at goal over again. He only had nine touches for a return of 1.3. Had he made one or two of those shots count, the pressure on Geelong would have tripled, possibly resulting in more turnovers or structural breakdowns.

PLAYER FROM THE OPPOSITION I ADMIRED MOST IN THIS GAME?

It was hard to pass Chris Mayne. He just worked tirelessly out on the wing for Collingwood all game. I thought he played really well a link man through the middle of the ground and he was one of the few Pies who didn’t look like he wasted the footy too much. Darcy Moore was another who battled hard and seemed to be playing a much better game than the majority of his teammates.

Tom Hawkins played a lot more mobile than I expected him to, racking up 21 touches 7 marks and 3 goals. He even managed to get back a few times to impact marking contests and save a goal or two. Without Blicavs’ as a mobile tall, he stepped up and played a little bit of that role, showing more versatility that I expected from the bloke.

There is a big difference between winning ugly and losing ugly. If you win ugly, you can say you did what you had to, to bank the four points and move on to the next week. When you look back at the season you see the W and move on. When you lose ugly, everything gets analyzed. Geelong is, fortunately, the former in this situation and will bank the win, head into the bye with an 8-3 record sitting in the top four having only really played two high quality games of footy. Then the big test comes. Three huge weeks in a row against teams sitting fifth (Power), second (Bulldogs) and fourth (Lions), with the Cats currently in third. We’ll know where they sit after that.

Well, this was a game. Mostly. With the exception for the last five minutes, I don’t think there would have been much noise from the stands, even if the crowd had been allowed in. Geelong ground out a margin and kind of let it sit there. It’s obvious they’re happy to cruise to a win with a priority on keeping injuries down and the petrol tickets in hand for a higher-ranked side, but it could have cost them dearly.

Great to see that Collingwood might have found someone in Bianco, the lad looks the goods, but that’s a rare positive for the Pies in this one.