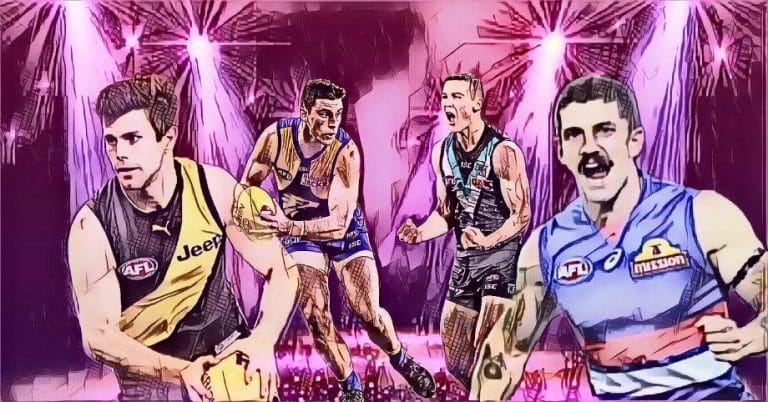 In The Spotlight – Round 11

Welcome back to another week in this interesting season. At the time of writing of football in Victoria is up in the air, with another Covid outbreak bringing some alteration to this week’s set of games for Sir Doug Nicholls Round. There was another interesting mix of stars, duds and one not suiting up, so let’s take a look at how last week’s choices fared and then get stuck into a brand new round of players In The Spotlight

Tom Lynch:13 Disposals, eight marks, 3.3
It was a tale of two halves for Lynch, or maybe a tale of two out of four quarters, which is a bit different. He gave Andrews trouble at points, however, faded badly through Q2 and Q3

Tom Mitchell: 44 Disposals, four marks, four tackles
He had a game-high for clearances (8) and I50 (7), fought through close attention to be arguably BOG despite the loss, clean hands in traffic were a feature.

Zac Smith: Nine disposals, 22 hitouts, 1.0
Didn’t set the world on fire, and although beaten by the Cats rucks, gave the Suns a presence they have sorely lacked. Should be better for the run.

Taylor Walker: 16 Disposals, nine marks, 3.0
Workmanlike performance, however stood up in the last quarter with the game on the line, including the game winning goal. With the season Tex is having, it was never in doubt.

Paddy Ryder: 12 Disposals, two marks, 41 Hitouts
Never gave up, and tried to get a lacklustre team going. One of a few Saints that could hold their head high.

Nathan Fyfe: 27 Disposals, three marks, five tackles, 1.0
Led from the front, game-highs in “pressure acts with 41 (16 more than the next best) , 19 contested possessions and 13 clearances. Beat the Swans at their own game

Darcy Moore: 25 Disposals, 15 marks, eight intercept possessions
Another great game from the gun defender, though credit must also go to Jordan Roughead for defensive coverage on Dixon so Moore could attack.

Cam Zurhaar:13 Disposals, five marks, 1.2
Attack on the contest was a feature, as always with Cam. Showed some spring at the high ball in the second half. Has been more mobile lately.

Libba has a date lined up with fellow contested ball beast and likely Brownlow Medal favourite Clayton Oliver. Ironically, for all the defensive prowess associated with the game style Liberatore has been known for over the years, he is actually the leading clearance player in the AFL by a massive margin. Liberatore in 2021 has accounted for 92 clearances, with Oliver in second spot, but a massive 18 behind.

The Bulldogs midfield regain ruck Tim English to battle Max Gawn, and with the two best midfields in the game going head to head it will be highly likely that whoever wins the clearance battle will ultimately win the contest.

With injuries to Josh Thomas and Taylor Adams further decimating an under-pressure Collingwood engine room, Daicos has been a shining light in a season marred in controversy and disappointment. The problem is, that he too has faced some inconsistencies, averaging 19 disposals with a rough kicking percentage of 55%. With these new injuries watch for his midfield time and responsibility to further increase.

After starting the season in the forward line, Daicos has moved back to where he has a knack of bobbing up at times with crucial clearances and hard outside run. At times he has shown remarkable ability, however, that seems to be mixed in with some decision-making flaws. This will be fixed over time, and moving into the midfield full time could unlock this in his game. He might be the perfect player for the assignment on Cam Guthrie

One of the major stories lost in the unpredictable season so far, has been the return of Whitfield from a nasty liver injury. The return of the two-time club champion has gone well and truly under the radar this season, and he has seamlessly transitioned back to his role, with his gut running and high-quality play re-invigorating a struggling Giants lineup.

In four games in 2021 he is averaging 25 disposals at 75% efficiency and looks favoured to oppose Brisbane star wingman Hugh McCluggage. I think people have forgotten just how dangerous Lachie Whitfield is and a win in his contest with McCluggage would certainly put his name back out there as one of the league’s elite performers.

To be honest, I could have picked any defender in this game, as both sides were spanked last week. I’m focusing on Wilkie as St Kilda have come off a 111pt loss. They’ve also lost defenders Hunter Clark and James Frawley to injury. Wilkie is a very solid rebounding defender who rarely turns the ball over (87% disposal efficiency) but with the two outs he may have to be on his toes.

North Melbourne aren’t particularly tall outside of Nick Larkey, however, Wilkie can be exposed when forced into legitimate one-on-one contests, as he is not particularly adept as an “aerial defender” Maybe North Melbourne will look to isolate him deep with Zurhaar to curtail his offensive game.

Last week, in game number five for his career, Greaves had the unenviable task of playing on one of the greatest small forwards of the modern game in Eddie Betts. While a definite learning experience for the young defender, Betts played a vital hand in securing the win for Carlton. This week he could likely run with one of the two Gold Coast indigenous small forwards in Malcom Rosas jr or Izak Rankine.

Rankine, in particular, has been tantalising the AFL since his debut yet hasn’t quite found his feet. The pleasing thing about the young Hawk was that he took the challenge head on against Betts, and did not drop his guard down. If he ends up with the excitement machine Rankine, Greaves must remember he is never out of the contest, as Rankine does, unknowingly at times, give his opponent a second chance to make up ground on him. Greaves will have a very important role to play in this clash.

The big-bodied Eagle returns for his first game in nearly nine months after rehabbing from the dreaded 2000s injury, Osteitis Pubis. Despite having just one WAFL hitout to his name, the Eagles hierarchy deemed that good enough, which suggests to me that he may patrol the forward line for a fair while, especially with utility Jake Waterman coming out of the side.

Even if Yeo has some signs of rust, his strength could cause the Essendon backline some issues, and when he gets his runs through the middle, his power and accountability at clearances will be a tough matchup for Darcy Parish, who is having a career-best season.

The captain of the Tigers returns after missing since Round Eight with a hamstring injury. Cotchin will immediately be tested as Adelaide possesses the highest pressure midfield in the competition, so hopefully Cotchin has done enough rehab, as hamstring injuries are notoriously tough to match simulate.

Currently sitting 9th and losing three of their past four games, the Tigers need to make a stand, as there is only one game separating 8th from 15th. A win for the Tigers has everyone taking a deep breath, but the Crows have been good – scarily so at times – and if they’re in the contest half way through the third quarter, they finish well. It might fall to Cotchin to increase the pressure around the footy, as he always seems to do, and put his foot on the neck of the Crows.

Sydney are coming off a two point loss, however, they got very little from Mclean, who had just five touches and failed to hit the scoreboard. While Franklin fired, they can’t rely on the 34-year-old to provide the massive majority of scoring impact every week, so Mclean needs to stand up.

Carlton have a great 1-2 punch in key defenders Jacob Weitering and Liam Jones, however, they can be exploited if bodied up and not allowed a run at the ball. Mclean will likely have Jones deep in the goal square, and the full back has been guilty of a few brain fades in the past few weeks.

The Swans, at times, have been too Buddy-focused, but ultimately that can help catch Jones out, as he will likely look to attack the high ball as third man up. Mclean has been incredibly accurate around goals with an 80% conversion rate, so the Swans know their hard work will be finished off if they look the way of Mclean from time to time.

Is he playing hurt?
Does he need to lift?
Is he a benefactor of friendly games?
Is he better suited as a midfielder or forward?

So many questions are surrounding the talented Rozee at this point of the season. I’m not sure what issue he is fighting through, but his form arguably matches that of Port Adelaide in 2021. Up and going against opposition they should be beating, however, when the tough get going, he is not. They barely scraped over the line last week and the talented forward had a mere eight disposals, which simply does not cut it for a player of his calibre.

You can rest assured that Fremantle will send pressure his way, so it will be interesting to see if Port’s barometer can stand up and show the AFL world that it is merely a form slump he is in, or will we get to the bottom of why things seem off in the past few weeks for him.