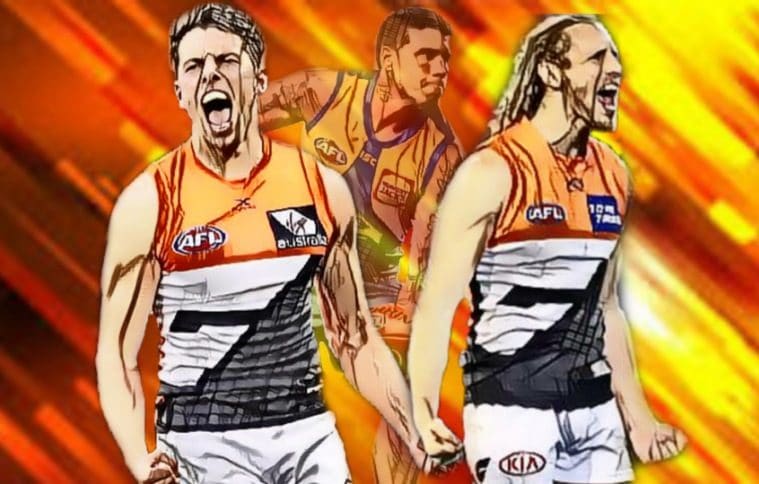 It’s hard to believe the Giants have already been in the league for 10 years. It certainly does feel like they were only generated yesterday, but in many ways, it’s also hard to remember what the competition was like before the big big sound started coming from out West.

In any event, this game was their tenth-anniversary extravaganza, and while it may not have been the biggest game the club has played in over their relatively short history, it still would have been one Leon Cameron’s men would have wanted to win for a number of reasons. They would, of course, have to overcome not just the Eagles but their own massive injury list, with Coniglio, Greene, Davis, de Boer, Keeffe, Perryman, Preuss, and Daniels all missing from their best 22.

For the Eagles, this game stood as one they should win. While the Giants had a lot on the line, in the form of a spot in the top eight, the Eagles needed to get up here for two reasons, one pragmatic and one a little more ideological. With Geelong and Brisbane winning already this round, and Port Adelaide still to play, the Eagles would have loved to bank the four points to keep themselves in touch with the top four, with winnable games against the Bombers and Blues to come before the bye.

In addition, their inability to win away from home (their lone road win coming against the relatively hapless Hawks at the MCG in front of six people and a stray dog on Mother’s Day) continues to be… well, an albatross around their already avian necks, and a win here against the depleted Giants would at least have counted in some form as a demonstration of their credentials.

Furthermore, it was premiership skipper and West Coast legend Shannon Hurn’s 291st game, putting him in outright first spot for the club ahead of former teammate, Dean Cox. It is somewhat remarkable that no one has yet managed 300 games for the Eagles, but nonetheless, Hurn’s achievement is definitely worthy of appreciation, for a player who has been a loyal servant through a period of some downs and many more ups.

In what loomed as a huge test for both sides, with plenty of ramifications for the top eight, here’s what happened:

With apologies to Brendon Bolton.

As mentioned above, there were a plethora of best 22 players out for the Giants, perhaps most notably captain/Italian stallion Coniglio and vice-captain/spiritual leader/walking definition of antagonistic little brother Greene. It was then, pretty clearly, imperative that the experience the Giants did possess in midfield did stand up. They did, and more on that later, but the two standout players on the ground were some of the more inexperienced mids in orange.

It may not have been the T Greene we’re used to seeing kick goals but the young Tom’s kick for the Giant’s first score was indicative of his talent. He then followed it up instantly with a clearance that led to an opportunity for the future cult hero Zach Sproule, who struck the ball beautifully.

In fact, eight of his 13 first half touches were score involvements for his side, as he created opportunities for others and capitalised himself with two first half goals. He finished with a game high 12 score involvements, but it was arguably his clearance work that was most critical for his side. For a player who’s played just 15 games, his strength is unbelievable, and it was his handball out to Josh Kelly that ultimately resulted in Bobby Hill booting home the sealer from the goal line. He is the favourite for the Rising Star by a long way at the moment, and justifiably so given the body of work he has put in over the course of the first half of the year.

Jacob Hopper seems often to be the forgotten man at the Giants. After a great season in 2019, he fell off the radar a little last year, but he’s averaging 27 disposals per game this year and has stepped up given the continued absences of bigger names in the middle of the ground. He had 28 touches today including two direct goal assists (one of which being the set up for Bobby Hill’s sealer), six clearances and six tackles as one of the best two players on the ground. He was at one point trade bait, but it doesn’t seem to me that GWS can afford to let him go, given the step up he’s undertaken thus far in 2021.

With apologies to former WWE wrestler Barbara Blank. It was, I think, one of the more intriguing midfield matchups in this contest. West Coast’s absences should not be undersold, in fairness to them, and Shuey and Yeo missing probably did hurt them just as much as Coniglio and Greene missing may have helped them, but with Tim Kelly, Dom Sheed and Andrew Gaff running around it’s not as though they were lacking talent.

Tim Kelly was, I thought, far and away the best Eagle on the ground in this one. As a Geelong supporter, Tim Kelly’s kick to Kennedy early in the second was a bit like seeing your ex-girlfriend thriving. Outwardly, you’re happy for them but deep down you’d prefer they were doing that with you. Ditto his clean finish from 50 to cap off Naitanui’s clearing handball. Kelly’s cleanliness around the ball every time is just so eye-catching, and his ability to hit targets out of contests always helps. His 15 contested possessions were a game high as part of 22 overall, to go with game-highs in inside 50s (eight), clearances (eight) and a team-high ten score involvements. If the Eagles had have gotten up it would have been largely on the back of the former Cat. Which just warms the cockles of my cold, dead heart.

On the other hand, with GWS’s captain and vice-captain absent, Josh Kelly stepped into the official leadership void. He is just as smooth moving as you could ever hope to be as a footballer. 25 touches for the stand-in skipper, including team or game-highs in clearances (seven), inside 50s (seven), and metres gained (533). The mammoth contract coming his way soon is nothing short of well earned, and if GWS (who after this win sit inside the top eight) are going to go one better than their 2019 effort, Kelly will absolutely be central to that campaign.

So of the namesakes, who takes the chocolates? Tim was clearly the best Eagle on the ground, and featured in the votes accordingly. He probably just shaded Josh in terms of output, but I’m not sure the Giant would mind particularly, having led his team to one of the defining wins of their AFL decade.

With apologies to… well, you all, for having to read that. The secret to beating the Eagles is not a secret. When Geelong belted them by 16 goals a month ago, in their last loss, it was because Rhys Stanley managed to actually turn in a half decent performance. By utilising his capacity to work hard around the ground, as well as Naitanui’s reluctance to do the same, the former Saint was one of the catalysts.

There is almost no greater distinction between two AFL ruckmen than that between Stanley and Shane Mumford. If the Giants were to be the team to end the Eagles’ three-game win streak, it didn’t seem as though the catalyst was going to be the enormous Bunyip Bruiser, or his understudy, the Narrandera Newbie Matthew Flynn. How wrong that assumption proved to be.

First to Naitanui, though. There are times where the way he plays his game makes him look entirely disinterested in defensive run but, in fairness, when you’re as good in the air as Naitanui is, it’s probably in some cases acceptable. To be fair, Naitanui’s aerial dominance over Mumford was pretty evident early, with a tap down to Kelly allowing the former Cat to hit Jack Darling at the front of a pack.

There were times, though, where Flynn managed to get off the leash and impact the scoreboard with two first half goals. After half time, Naitanui’s effort seemed to lift, probably best exemplified by two goal assists but his work rate also seemed much more evident. It was a great run down the wing, and I for one would have loved to see him go all the way. However, despite the Eagles’ 46-21 hitout ascendancy, the Giants won the clearances 42-32, which went a long way to providing them their fifth win of the season.

From the air to the ground, and I’m pretty sure there’s a Jarrod Brander-shaped imprint in the centre of GIANTS Stadium after the man they call Sausage absolutely decked him into the turf. There was no question about the legality of the act, but it was a good, strong tackle in the third quarter which really set the tone for the Giants from there on out. He then got over Jack Redden for a nice mark that pretty much iced the game. Joey Montagna’s decision to say it was ‘as high as Mummy’s been for a while’ was… interesting, but Mummy’s physicality in the centre of the ground was pretty key to his side’s win.

Plenty left to discuss in this one…

That’s probably enough rambling from me. The Giants’ win gets them into the top eight at the end of round 10, consigning their 2019 Grand Final nemeses Richmond to ninth, temporarily at least. Brisbane at the Gabba next week present an intimidating challenge, but with North, Carlton and Hawthorn after that, the Giants could well sneak into the eight this year. For the Eagles, as discussed, they get the Bombers next week at home, followed by an intriguing trip to the MCG to play Carlton, having just lost touch with the top four.