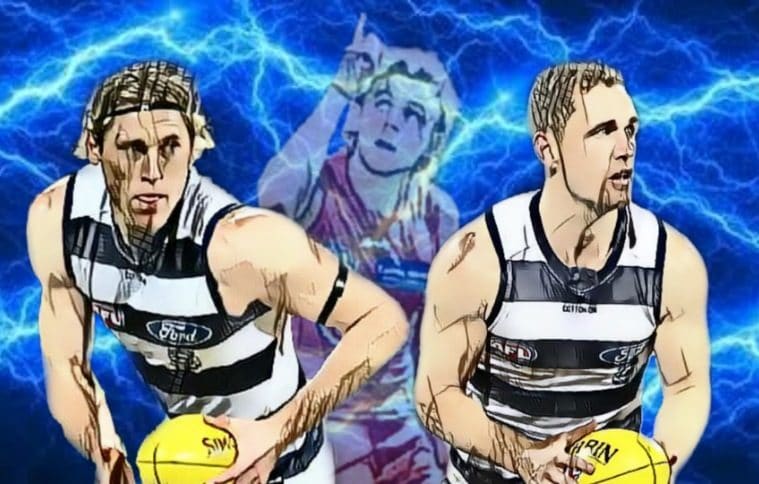 Gold Coast threatened for so long to take this game off-script on the Cats. For Suns fans you have to really get the satisfaction out of the effort from such a young team. But against such an experienced Cats outfit at home at Kardinia Park, a whole lot was going to have to go right for them in order to pinch this one.

Geelong owned the footy for the majority of the match. They had 161 more disposals and were +31 in contested possessions, +136 in uncontested. The Cats had 18 more clearances and 20 more inside 50s. In the end, the stats probably showed that the Suns were incredibly defiant and stingy to not give up a far larger score, and to actually stick with the Cats for large parts of the game. Credit where it’s due for Suns coach Stuart Dew as his team – they never gave up the pursuit of the Cats.

And if you did happen to watch the game, outside of about three 10-minute patches, you’d argue the Suns deserved to be much closer and even in front, at times. They played some patchy football, themselves, and really deserved to make more of their opportunities. Sometimes they just made really weird (and you could also say poor) choices with ball in hand, as they kicked to certain players and not others, but you cannot argue that their pressure on the Cats was absolutely first class.

Cats’ fans were definitely having some nervous moments when the Suns came within seven points early in the third quarter. With Duncan already subbed-out and Cam Guthrie off hurt, a boil over was not out of the question.

A true sliding doors moment will be if Sam Flanders had converted his running shot at goal, in the open, to give the Suns the lead. If Flanders kicks that goal, maybe the Suns players get a bit excited, and it might be their day. Instead, Flanders misses it, and the ball goes straight down the field for a Tom Hawkins goal and the Cats are ten points up.

In the end, the Cats put their foot down enough to give themselves a break big enough to coast home in the last quarter and bank the four points.

Now let’s get into the stuff that mattered…

Very good game from Narkle. With Duncan out after half time, Guthrie nursing a shoulder during the second half, the Cats were starting to look pretty thin through the middle. We all know Selwood was still there, and we’ll get to him, but the Cats needed someone to step up.

He would play the best game of his short career so far and have a personal best in disposals. You had to wonder if his hair had a camouflaging effect as he seemed to find space around the top of the fifty-metre mark of the Cats forward line.

I don’t know if anyone has seen the movie “The Replacements”? It’s a movie about an American football team signing up part-time players due to the professionals being on strike with Keanu Reeves and Gene Hackman. Anyway, Greenwood played this game like he was the character Danny Bateman. He just hunted every Geelong player with the footy in his vicinity. With so many young teammates around him Greenwood has assumed the role as the inside midfielder, and I struggle to think of anyone in league who plays it better.

I also want to mention the time in the first quarter where he came off the bench for a cheeky disposal in the second quarter. I don’t remember where I heard it from but every time, I see a player do that I always yell out “That’s un-Australian!”

In recent times I have found myself defending Joel Selwood’s place within the Cats team. It seems some people (including Cat’s supporters) have become so accustomed to his elite level of performance that as soon as he has a slight dip in form, they state he is too old and should just hang the boots up. Laughable.

Yes, Selwood is older now and his role in the Cats team is no longer as their best midfielder, but he still plays a very key role in the team. Not only is he an inspirational leader, but he is also a contested beast. With Cats midfield needing a lift Selwood delivered big in this game to get the Cats over the line. Particularly when you realise, he was going head-to-head with Greenwood and Miller, who one of the toughest inside midfield combinations going right now.

What a second quarter by this guy. That was elite defensive footy. Geelong had about six players rolling through their defensive interceptor role, but Powell held up the Suns’ dam wall for a period of time during this quarter, just about on his own.  One of the multitude of Suns with less than 50 games under his belt, Powell was playing like a veteran at times and was one of the clear winners for the Suns in the game. Powell led this game in intercepts (11), one-percenters (eight), and also contested marks (three).

A monster 860 metres gained by Lukosius in this game. I really enjoy it when players know their strengths and Lukosius knows he has a booming kick on him and uses it accordingly. Of his 23 disposals, 20 were kicks, and they went a long way.

Stewart is the player the Suns want Wil Powell to become. Stewart, already a dual All-Australian has managed to make himself even better. Averaging career highs in disposals and intercepts. Stewart was in control of his space in this game. He just doesn’t get beaten in the contest. It doesn’t matter if it is in the air or on the ground, Stewart just doesn’t seem to have any weakness at all.

This is the game that the Cats want from Ratugolea and Blicavs. It is noted that they were not exactly up against Max Gawn, but Geelong will still be buoyed by the performance of their work-in-progress ruck combination. Plenty of hit outs, clearances and tackles, plus their ferocious attack on the footy. Blicavs was clearly the dominant ruckman on the ground, but Ratugolea served as a solid support.

Shaun Higgins won’t want to watch the replay of the tackle that gave Mitch Duncan his concussion. Higgins handballed the footy forward to Duncan and put his arms out to make it look like he was shepherding but failed to impact the chasing Suns player in Nick Holman.

We all know where this is going, Holman catches Duncan mid-kick and drives him into the ground in the perfect run-down tackle. It was unfortunate that Duncan was concussed but there was no issue with the tackle and Holman has nothing to worry about.

The Return of Mr Smith

Zac Smith had a decent enough return to Kardinia Park. Smith has been desperately needed by the Suns following Jarrod Witts’ injury. He’ll be happy to get through the game against his former team for his previously former, now current, team. I believe he will definitely be saving a copy of the video of his goal from a snap around the corner, during the second quarter. Under pressure and with a high degree of difficulty, Smith made it look easy.

Cats’ fans have been absolutely overjoyed by the development of Close this season. He should definitely be feeling good about potentially keeping Gryan Miers out of the side or pushing Luke Dahlhause out when Miers returns from injury.

Got the win. Were challenged and responded.  They will sweat on the health of Duncan and C. Guthrie. They will love the continued development of Narkle and close and the continued gelling of their three-pronged forward line. Nothing much more to say about the Cats. They move on to Collingwood next week and try to build towards a possible top-four finish.

It was a better performance this week form the Suns. The effort and intent looks like it is there, but they just lack execution. They fall to 15th on the ladder and set up a very interesting game against the Hawks next week in Darwin. I’m tipping them to get it done in the red centre.