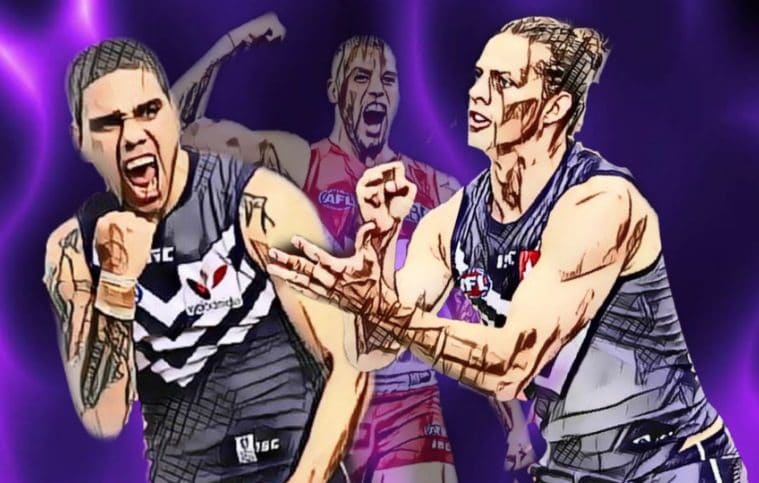 After a hiatus of sorts, it is great to be back writing for footy’s best news source, The Mongrel Punt. With rain threatening all night but staying largely at bay, the Dockers and Swans fought it out under lights at Optus Stadium.

And what a contest it was. A game of ebbs and flows, the Dockers prevailed…just! Here’s a brief look at who turned up for the fight and those who didn’t.

Rory Lobb has always promised plenty throughout his 111 game career. Indeed, his natural talent has never been denied. This evening that talent was on display, and it was on display in spades.

Lobb dominated the aerial battle, clunking nine marks, providing a key lead-up option and demonstrated a terrific work rate. This was all topped off with a bag of four goals. However, it was Lobb’s temperate in the third quarter, when Taberner checked out of the game injured, that allowed Fremantle to open up a buffer on the Swans.

Arguably, that buffer should have been larger, given the relentless forward 50 entries, but it nonetheless illustrated Lobb’s ability to work two-ways throughout the night in challenging, slippery conditions. As has been the case throughout Lobb’s career, one good game is one thing, but a string of good games is another. Dockers fans will be hoping Lobb can tap into a good base of form and string together a few solid games to solidify his place in the team and give the team a reliable focial point.

Well, I’d have to admit that I, along with many footy commentators and fans alike held that view. Buddy Franklin’s first foray at Optus Stadium was simply sublime: eight goals, in a match-winning performance way back in 2019. His second outing at Perth’s new home of football was just as good.

Franklin showed his class early with a goal and never looked back. His penetrating left-foot kick was on display; a sight for sore eyes after his incredibly unlucky run of injuries. He registered six goals by the night’s end, but it could have been eight or nine. That look of hunger some players exhibit when they feel at the top of their game was worn by Buddy tonight. Aggressive, excited and passionate, Buddy was in full flight and I’m sure most if not all footy fans would concur that it is great to have Franklin back at his very best.

Now, the charge to 1000 goals, a milestone this man richly deserves.

It was good to see Michael Walters accumulate more of the footy in this contest and without much surprise, he had a significant impact on the contest. Walters is at his best when he’s playing higher up the ground in an on-ball role. His kicking skills are elite and that’s why he needs to get more of the footy in his hands.

Against the Swans, Walters was clean in conditions that didn’t make it easy to control the footy, and provided apt clearance work to boot. He topped off his work with a nice goal, as well.

Walters was a clear hero in this contest. No doubt a performance which will silence many of the critics, too.

A game of two halves for Fyfe. At the main change, the Freo skipper was in my zeroes column. His impact on the contest was limited, and his disposal had been poor – something that has plagued him in recent weeks.

However, as the third term got underway, Fyfe showed just why he’s a champion of the game. His work rate lifted dramatically, he racked up a handful of possessions in quick succession and his attitude and application was simply elite. Fyfe didn’t just drag his team back into the contest, he dragged them ahead, and led the Dockers to smash the Swans on the inside 50 count in the second half.

Fyfe kicked a captain’s, game-winning goal to top off an immense performance deserving of Hero acclaim.

Just a couple of seasons ago, George Hewett seemed to be coming into his own as a good AFL player. And I don’t use the word ‘good’ here lightly. Hewett was hovering around the low to mid 20s disposals mark on a consistent basis, accumulated strong tackle numbers, and simply put, was playing some fantastic football.

Fast forward two seasons and that same Swans player isn’t to be seen. Hewett was poor tonight, in a game that suited his style of football – tough, tight, and contested. He registered a mere 13 touches and applied only four tackles – numbers which don’t reflect his ability at all, but numbers which also hurt the Swans dearly, particularly when they needed to stem the flow in the third quarter when Fremantle upped the ante.

Maybe George Hewett is having one of those seasons, maybe the new rules just aren’t gelling with his game. Whatever the reason for his lull in form of late, the Swans will be dearly hoping he can recapture his best football output if they are to play a meaningful part in the second half of the season and indeed September.

It is somewhat remiss to be critical of a defender who is simply playing in the side consequent to Freo’s injury shambles which has torn through the backline brigade. That said, there is an expectation of any AFL-level footballer that targets should be hit by foot on a very frequent basis. Watson didn’t meet those expectations tonight.

He was poor early, clocking up three turnovers from his first four kicks and his night never really got going. To say he was serviceable in the second half would be generous. It was probably more of a blessing for the Dockers that he did not get his hands on more of the Sherrin, because dare I say the result could have been different had the young defender been tasked with kicking the footy out of the backline in the dying minutes. Watson goes out when Alex Pearce returns, although word from the WAFL is that Pearce has pulled up with yet another injury.

A stint in the twos would give Watson an opportunity to get back to the basics of footy and accumulate a bit more confidence in his ability.

A harsh zero but a zero nonetheless. Papley kicked two goals – one admittedly being a fantastic checkside on the fly, but apart from that, the goal sneak didn’t do much at all.

Again, like Hewett, conditions suited the enigma that Papley is, but he failed to take advantage of the ground ball opportunities. He fumbled throughout the night and just didn’t seem to have the same work rate, and those second efforts that have become synonymous with his game. He was lacking the typical Tom Papley pushing and prodding that Swans fans have become accustomed to seeing.

You could easily throw Will Hayward into the mix for a zero as a substitute for Papley, recording fewer possessions and one less goal, but a player ought to be judged on his existing ability. Papley is a damn good player and I’m sure he will bounce back, but tonight he was simply missing.

Overall, a terrific win to the Dockers with Sydney giving things a real shake on the road. Freo are now knocking on the door of the top eight, with a road trip to Port Adelaide on the agenda. The Swans head home to welcome the Blues to town and look a better team than Carlton on this season’s form. They sit in seventh at the time of writing and if they win next week, should be starting to think about September footy.