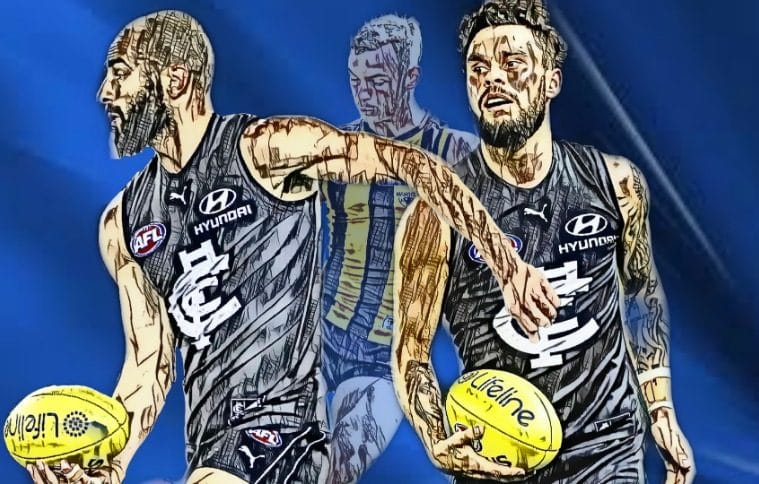 In an enthralling contest on the MCG, Carlton and Hawthorn clashed with plenty to play for. The Blues were looking to get closer to the Top Eight, whereas Hawthorn, coming off a loss to the winless North Melbourne last weekend, knew full well a response was needed.

In an extremely entertaining clash, it was the Blues getting the monkey off their backs, recording a hard-fought 23-point win after limiting Hawthorn’s attack to two goals after halftime. This game included skill errors aplenty, outstanding defensive football, and a contest where you felt neither team was out of the contest.

If you take a look at the stat sheet and see T. Mitchell – 44 touches, you would assume “oh he was not that damaging” Well, in some respects you need to look deeper and just make assumptions on the numbers and opinions of others. While not often damaging with his disposal in the context of distance or penetration, he was still unable to be stopped. His 44 touches went at 77% efficiency to go along with seven inside 50 entries and a game-high eight clearances.

He went head to head with Sam Walsh and had his troubles early, however, he still managed to accumulate the ball with 11 first-quarter touches to Walsh’s 13. It must be said that the cleanliness of Mitchell’s hands under pressure may be the best I’ve seen since Greg Williams or Chris Judd… Yes, he is that good…

A handful of times he was able to still get a clean and effective handball out despite being wrapped up in a tackle, His handball to Mitchell Lewis that set up Luke Breust late in the second quarter while getting dragged to the ground was a prime example and a quality possession, so while he does not rack up the all-important “Metres Gained” in some games, sometimes the most effective disposals only have to travel a few feet.

David Teague may be on to something, with making a single switch he has unlocked two of his players. Shifting Zac Williams back to his natural half back position and unleashing Sam Docherty as a wingman have worked wonders and also added a lot of structure to the rolling zone defence Carlton likes to employ in general play. Williams’ disposal efficiency was again great as he combined his dash, with an assured head and quality defensive rebounding. He surprisingly added a defensive factor as well, especially in the third quarter when Hawthorn were pushing. 26 disposals (85%) with eight intercepts and a goal to his name in this one.

Sam Docherty spent a large part of the game giving Tom Phillips a lesson, despite just getting settled to the role change. He fits the mould of a two-way wingman, not based on work rate but his IQ and reading of the play is outstanding. Also, with coming off his knee injuries, being up the ground a bit can also help as he no longer needs to instinctively react to his opponents moves as much. As he grows into the role watch for him to take some pressure off the defence.

Despite having only four touches to his name, for a large majority of the contest, Hartigan was right on top of Harry McKay. Even with Carlton having the ascendancy often, Hartigan was able to impact nearly every contest McKay was involved in. His only undoing was losing sight of an incoming kick in the third quarter, conceding a free kick on the goal line to the big blue. The second goal from Harry was a long bomb from outside 50 on the flank, and personally, it gave me a prime “Buddy Vibe” as it was a left-footer on the left flank arcing around.

That highlight aside, Hartigan’s games was one of the handiest four disposal games there has been.

Hawthorn early decided to throw debutant Ned Reeves in the ruck against Marc Pittonet early, with the Blue getting on top and sparking the midfield clearance work. With the introduction of captain McEvoy into the fray, the Hawks were able to nullify the damage and get some clearance work of their own in throughout the game, with McEvoy contesting the middle and Reeves playing his part around the ground. Pittonet and De Koning were a little more prominent up forward, however, the points were shared in this contest. Both sides would have been happy with their ruck output.

WALSH VS THE TAG

Sam Walsh was absolutely brilliant in the first quarter, leading the way with 13 touches and four tackles as Carlton jumped out to a 14 point lead, however, after that Clarko pulled the strings and sent James Cousins to Walsh to apply the clamps.

Cousins played Walsh superbly, disallowing him the time and space he is accustomed to. Walsh manfully battled on, getting battered every time he was in the vicinity of the ball, however had to mainly resort to in-tight handballs (6 kicks vs 11 handballs after tag) while Cousins was also able to gather some of his own ball with 22 touches.

The pressure on Walsh was mounting in the second half, as he was caught a few times in possession, including a chase-down by McEvoy and unable to break a Mitchell wing-tackle with a goal scoring opportunity beckoning. Walsh though was still a factor outside of his blistering first quarter with 30 disposals, 33 “pressure acts’, a goal and six tackles

Both team defences were superb in this game, with the aforementioned Hartigan combining with Sam Frost (who loses the least one-on-one contests – as referenced by the commentators about nine times) against the tried and tested duo of Jacob Weitering and Liam Jones.

During the second quarter, in particular, Jones and Weitering were almost impenetrable as the Blues locked the ball in for a long period, and the Hawks clearing kicks seemingly always found one of the two defenders. Often in the second half, Teague would sacrifice a number up the ground to make sure he always had a numbers advantage for the clearing kick, which Hawthorn failed to address and it put the brakes on them getting back into the game. Nine and seven intercept possessions for Weitering and Jones respectively, while also negating Mitchell Lewis and Jacob Kocshitzke. The highlight for the duo was an important chase-down tackle by Jones on Koschitzke late in the game with the attacking 50 to themselves

Sam Frost had a game-high ten intercept possessions and ably picked up the slack of a few others who were found wanting throughout.

JARMAN IMPEY: He had been running red-hot for most of the season and was in AA conversation as one of the most improved players in the game (and rightly so), however, he had only six touches in the first half with Michael Gibbons for company. Gibbons had 17 touches and a goal, and while the stat sheet showed Impey had 24 touches and was amongst the Hawks leading ball-winners, not only did he have a shocking first half but he also didn’t look to be working hard enough early in the game.

A few of his kicks came up a few metres short or took the risky option at bad times. Some paid off, however, the risk wasn’t worth the reward at other points.

Patrick Cripps was an absolute bull in close, and even got to have a three bounce trot on the MCG wing. 25 disposals, ten tackles and five clearances, however, he needs to stop with the underground handballs in contested situations… Take a note from Titch and get your arms out to release. On the subject of “bulls”, Liam Stocker did some really good things in this game. I want to see him in this team week-in and week-out

If James Worpel can put together four quarters he might be Hawthorn’s best player. 13 touches in the third quarter alone, however, he had just 11 touches in the other three quarters.

Koschitzke was incredibly unlucky to get tackled on the goal line after swooping in to create a two-on-one marking contest. He took a step and was immediately tackled. However, I’m likely the only person that believed that instance should not be called “play on” as not only had the whistle not been called for a mark, the umpire never called play on, and tackle came from behind in the “protected area” Anyway, I have never seen one not paid…

Changkuoth Jiath needs some more coaching and perhaps some time in the reserves to develop. As today demonstrated, you need more than athletic ability to be successful. He looked very fumbly and extremely unsure when forced to be the primary defender. Jack Silvagni played an outstanding game on him, and made him accountable every minute. For all the flak Son Of SOS cops, his footballing IQ is off the charts in my opinion.

Chad Wingard is definitely worth persisting with as a midfielder. His clearance work is a factor and he can also go forward, however, he seemed to be operating on a time delay during the game, at one point taking two seconds to fall after getting some contact in a marking contest.

Ed Curnow and Marc Murphy just keep on keeping on – wonderful servants of the game and still have a lot of games left in them. Eddie Betts may be in his last year, however, he taught young defender Damon Greaves a few things.

Harry Morrison and Dylan Moore will be very handy players, they both should be given as many tough jobs as they want. They will be all the better for them.

I’m not an AFL defender, yet even I know a backwards tap while looking up at a ball IN DEFENSIVE 50 is a dumb move. Adam Saad just FYI.

Great advertisement for playing a goalkeeper with the goal from Daniel Howe to close out the first half. He got a great bounce and by the time Jacob Weitering doubled back and chased it down, it was too late.

One final piece. The umpiring in this game was not bad, however, I felt Hawthorn got dealt the rough end on a few occasions, with failed fend offs by Carlton going largely unpunished. Also, I just wanted to add,  the hit on O’Meara was a lot worse than actually mentioned, as the incoming Carlton player did not even have a raised arm out to spoil, he was always taking the body. It will be interesting to see whether the AFL look at this, or whether the slight overkick from Tom Mitchell remains the guilty party in the collision.